Please refer to our Privacy Policy for important information on the use of cookies. By continuing to use this website, you agree to this.
Home Latest PRovoke18: 'PR’s Time Has Come' Says P&G's Marc Pritchard 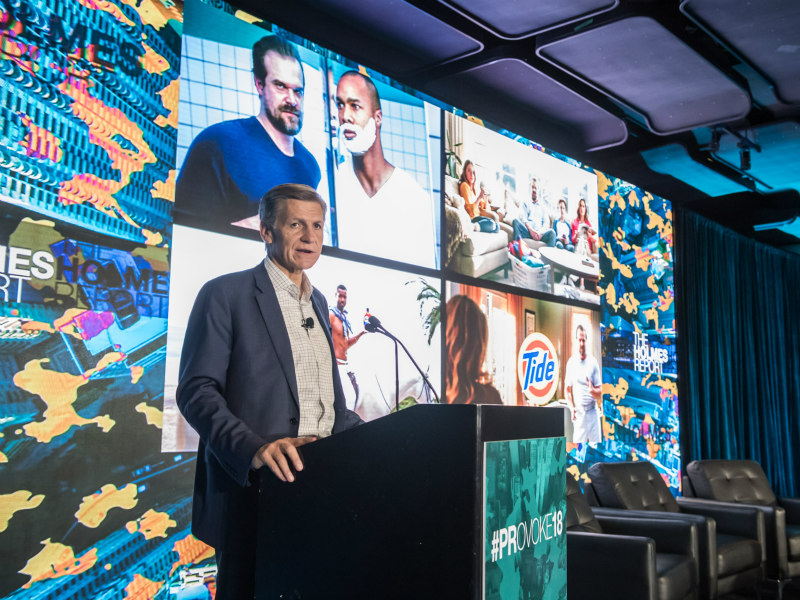 P&G chief brand officer Marc Pritchard calls on PR people to take four actions in order to take advantage of the disruption that is sweeping through brand-building.

WASHINGTON, DC — P&G chief brand officer Marc Pritchard called on the PR industry to take four actions if it hopes to capitalise on a unique opportunity to lead the disruption that is fundamentally reshaping how brands are being built, during his keynote session at PRovoke18 today at the Watergate Hotel.

In a session moderated by Citizen Relations CEO Daryl McCullough and also featuring P&G Beauty & Grooming chief communications officer Kelly Vanasse, Pritchard set the scene by detailing the ways that the CPG giant is attempting to reinvent its approach to media, advertising, agency partnerships and citizenship.

It is in that last area where Pritchard feels that "PR shines the brightest" — "reinventing citizenship from brands that are “all about me” to brands as a force for good and a force for growth."

"Today, Gen Z, Millennials, and even Boomers want to know what brands believe in, the people behind them, their values, and points of view on relevant issues – like equality and the environment – and they make choices based on others advocating for a brand – not a paid sales pitch," said Pritchard.

Specifically, Pritchard pointed to four areas where P&G is tackling issues that major companies might have traditionally shied away from, including gender equality (Always #LikeAGirl and #EndPeriodPoverty), racial equality ("The Talk" by PR professionals like Egami’s Teneshia Jackson and P&G’s Damon Jones"), LGBTQ inclusion and sustainability.

"These efforts are effective because of the power of PR," said Pritchard. "It’s not about talking about ourselves, it’s about expressing a point of view, taking action, and allowing others to step up to advocate because they want to, not because they have to."

However, Pritchard noted that the PR industry needs to focus on four areas if it truly hopes to grasp the opportunities presented by the disruption of traditional marketing:

1. Innovate on data and analytics. "PR programs reach hundreds of millions of people and capturing that consumer data would be to your advantage to achieve mass word of mouth on a one-to-one basis."

2. Innovate on measurement. "While progress is being made, too many are still using blunt instruments to measure “impressions”. We don’t have enough visibility into who the programs reach, and how often. The more we see how many people are reached – without duplication – the more likely brands will be to invest. It’s high time for the PR industry to come together to innovate on measurement systems."

3. Innovate on content. "We want to engage consumers with real stories that can be amplified through PR, such as Katie Couric Media’s “Getting There” series sponsored by Olay, Pantene and Secret. Our Queen Collective partnership just awarded 2 Black women directors to develop short-form content and the influencer program will be a central part of activation. You all know a good story when you see one, so let’s innovate together."

Pritchard reiterated that he had never been "more excited about the future of brand building and the role of PR." He pointed to a backdrop that includes the decline of traditional advertising, the rise of digital media and ecommerce, and an agency world in flux to support his contention, using examples like Olay's “No Fear of Age” campaign on International Women’s Day in China.

"Doing less 'push' advertising has led to more 'pull influencing' through 'talkable content'," said Pritchard. "For example, Olay defies 'judgments' by rejecting the notion that women are 'too strong', 'too confident', “or 'too anything', and instead, live fearless to face anything. This is a conversation people want to be a part of, and it’s pulling millions of people into the brand."

"We’re also imagining a world with zero ads - building partnerships with professional content creators to drive engaging experiences with consumers," he added. "These content creators are helping us start conversations with our brands and go into new places - many of which have no ads or very few ads. PR is at the heart of these partnerships, so bring us your 'pulling power'."