Please refer to our Privacy Policy for important information on the use of cookies. By continuing to use this website, you agree to this.
Home Latest PRovoke18: 'You Cannot Have Agility Without Courageous Communications' 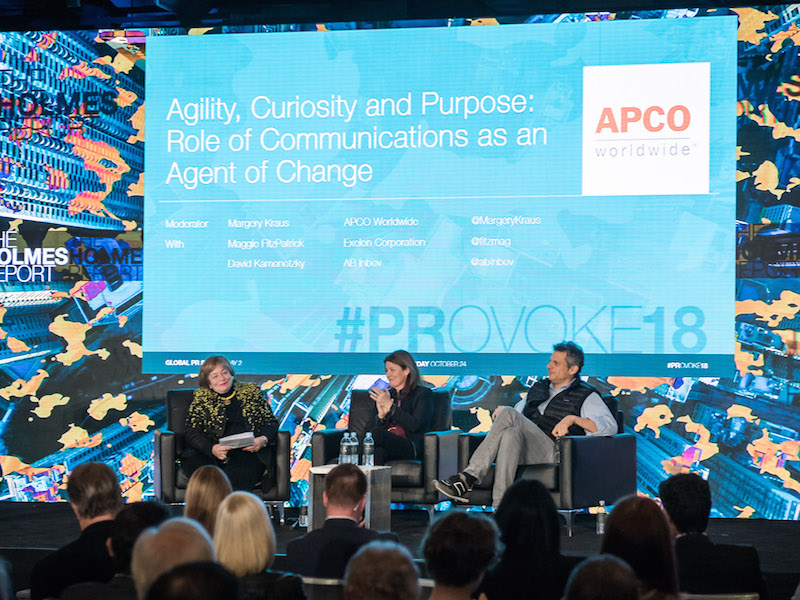 PRovoke18: 'You Cannot Have Agility Without Courageous Communications'

Exelon’s SVP corporate affairs Maggie FitzPatrick tells delegates in Washington that communications plays a vital role in brands’ ability to be agile in line with their values.

WASHINGTON, DC — Courageous communications is a critical factor in brands being able to act and respond to a changing world in an agile manner, according to Maggie FitzPatrick, SVP corporate affairs, philanthropy and customer engagement at clean energy giant Exelon Corporation.

She said: “Communications and marketing are at the table, counselling the c-suite and guiding critical business decisions. But you can’t be agile without courage. In a country where there is a lot of climate denial we have taken a courageous stand to speak up on climate change, but we’ve all sat in the c-suite where people have prevaricated about the right thing to do and lawyers are editing every word. That’s not an environment that allows you to be agile; you need to be fast, but thoughtful.”

FitzPatrick was speaking at a session on “Agility, Curiosity and Purpose: Role of Communications as an Agent of Change” at the PRovoke Global Summit, led by APCO Worldwide founder and executive chairman Margery Kraus.

Kraus outlined the results of recent APCO research into agile companies, which found that only 40% of executives felt that their companies were prepared and have the ability to move with the speed required in today’s environment.

“Three traits of an agile company came out of the research,” she said. “The first is active leadership, the second is shared advocacy, and the third is having an enterprising culture.”

Kraus said that getting the balance right between strategy and purpose was a key factor in companies being able to move forward in an agile way: “You need to solve problems, but you need peripheral vision. At Davos last year, World Economic Forum founder Klaus Schwab talked about having a radar, and a compass: if you don’t understand what’s round the corner you can’t make good decisions, but if you don’t have a north star, there’s nothing to guide you in making those decisions.”

AB InBev’s chief strategy and external affairs officer David Kamenetzky, who was also on the panel, said the increasing speed at which businesses were expected to move required a laser focus on reputational impact: “Historically, there was enough time to get an aligned position globally. In today’s world, global companies can face different issues in China and the US on the same day, and the only way to respond fast is by making reputation the key lens through which we talk about the company, so you all have the same mindset and the same view of what success looks like.”

Kamenetzky said consumer trust was particularly important in the alcoholic beverage industry, and this was another driver of brand agility: “It’s critical to have a marketing team that is fully engaged in driving responsible consumption and has that values system, so they can operate with speed and ensure we don’t express values that aren’t in line with the brand values or the values of our consumers.”

In terms of the topics on which the company and its brands “had permission” to speak up, Kamenetzky said: “Our brands are taking a stand on issues where consumers give us permission, like violence against women, road safety and sustainability. We do stay away – unless we have concrete lobbying targets in certain countries – from statements on border control and immigration.

"We’re not on a Nike-style journey, because we’re too exposed to too many governments at the same time. We’re a big sponsor of NFL but we try to stay neutral and respect both the rights of players and the right to criticise them. We sponsor the presidential debates, so we will sponsor events when people are talking in a partisan way, but we avoid taking a partisan position ourselves.”

The panel also discussed the role of agencies in supporting companies wrestling with how and when to act and respond. FitzPatrick said: “In this incredible communications environment, there are those that would counsel you to be the first to tweet and respond, but and one of the most powerful things I’ve observed is the role of restraint, and listening. It’s not about a kneejerk reaction to what’s going on on social media, but engaging in meaningful ways when it matters, grounded in your values. Our agency partners help us not engage where we don’t need to, where there is no reputational impact.”

And she added that the energy supplier was increasingly focused on diversity from its agency teams and would be prepared to pay more for the best agency talent: “We’re looking at how we can have a more diverse bench that reflects those we serve, and how we get the best minds at the table. I know there is merit in terms of cost efficiency but I don’t think it will win the day over client service. I’d bet my last dollar on an agency who is really embedded in our team – even if that comes at a premium – because we know the work will be better."