Please refer to our Privacy Policy for important information on the use of cookies. By continuing to use this website, you agree to this.
Home Latest PRovoke18: With Talent The Number One Challenge, Firms Get Creative 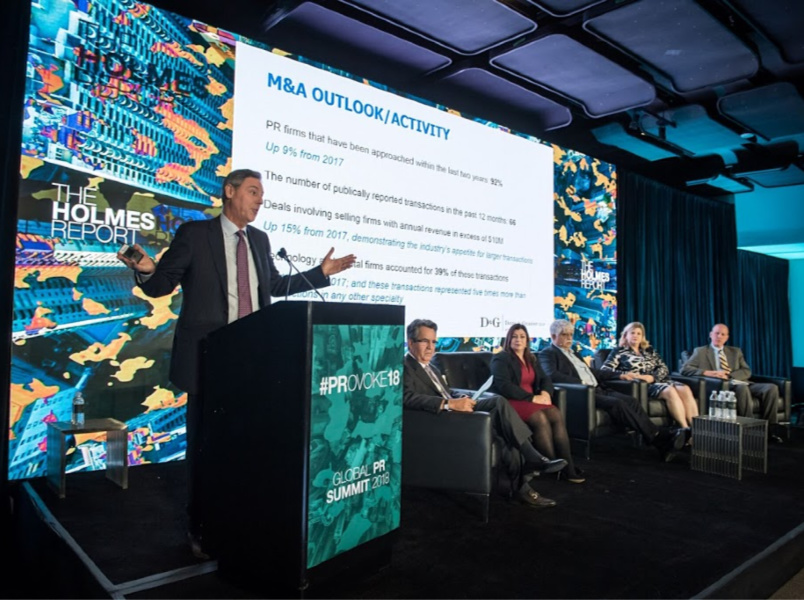 PRovoke18: With Talent The Number One Challenge, Firms Get Creative

Attracting and retaining talent is the biggest challenge facing PR firms around the world, according to research conducted by Davis & Gilbert and The Holmes Report .

WASHINGTON, DC—Attracting and retaining talent is the biggest challenge facing PR firms around the world, according to research conducted by Davis & Gilbert and The Holmes Report and presented at the Independent PR Firm Forum in Washington, DC, today. That challenge has forced agencies to get creative about nurturing and developing talent in a variety of ways.

During a session on “Enhancing Profitability and Growth” led by longtime IPRFF partner Davis & Gilbert, the emphasis was very much on people issues. The research found that the most significant hiring practice reported by respondents involved bringing in a higher percentage of mid-and senior-level employees skilled in business development and client relationship management, and that the biggest organizational change involved integrating client teams to blend PR, digital, social, creative, marketing, advertising and branding talent.

Brad Schwartzberg, co-chair of the corporate practice group at the law firm, told audience members that in response, more than half of responding firms have created some form of long-term incentive program, on top of salary, to attract and retain talent. Three-quarters (74%) of respondents say they have put together a long-term incentive program solely to attract and retain talent, while 26% say those programs are also designed to prepare for a sale.

“The firms that have the best talent invest in their teams, not just from a compensation standpoint but in terms of training and development,” said Kathleen Gratehouse, principal at technology PR specialist Highwire. “We tell our employees that we have their back, that we can help them learn the things they need to thrive and build their careers.

“Being independent is a huge advantage,” she added. “People want to be part of something that they can shape, that they can help to create.”

At Indian PR giant Adfactors, meanwhile, a significant percentage of the agency’s profit has been invested in professional development of its 700 people, according to managing director Madan Bahal. “We have not been as focused on ROI in learning and development,” he said. “We just invest, and we believe that it will pay off in the long range.”

The firm provided e-readers for all of its employees, for example, to encourage reading.

Jennifer Gottlieb, president of fast-growing agency W2O, said her firm was focused on areas such as “cross-training,” allowing people to learn new skills like investor relations and “grow horizontally,” with people transferring from PR to analytics, for example, and allowing inter-office transfers both in the US and internationally.

At New York-based G&S Business Communications, meanwhile, there has been a three-year emphasis on diversity and inclusion, according to chief operating officer Jeff Altheide, who said the firm has built relationships with a number of historically-black colleges. “It has really increased the pool of talent,” he said, at a time when talent might otherwise be in short supply.

Getting specific about the challenges their firms had faced in recent years, panelists were focused on talent issues. For Gratehouse, the biggest change of the past 12 months involved the acquisition of competitor Inner Circle Labs. “The motivation behind our acquisition was talent,” she said. “We had competed with this firm and we knew a lot about them. This was not about growth, it was about competing in a market where talent is at a premium.”

Bahal said his firm has focused on building a stronger, values-driven culture. “We went back to basics and we realized that while strategy is the engine that pulls the train, you also need a foundation in culture and purpose, and that’s what gives us the strength to compete in a fast-changing world. Strategy changes, culture doesn’t.”

Discussing the ability to integrate client teams to represent multiple disciplines, Altheide said his firm has created a new project management group. “We have about six people now for whom that’s their job,” he said. “And we are delivering a broader range of services as a result.”

Gottlieb said that the acquisition of digital firms had strengthened her firm’s project management capabilities, because digital people have a natural project management focus that many traditional PR firms don’t have. She also pointed to one of the key factors in integrating those acquisitions: “This last year we have focused on operating as one team under one P&L to bring the best solutions to our clients.”

That resonated with another of the research findings, which is that the most important financial or operational change firms have focused on over the past 12 months is having all divisions operate under a single P&L.

Other research findings include: