Please refer to our Privacy Policy for important information on the use of cookies. By continuing to use this website, you agree to this.
Home Latest PRovoke19: 'Leadership In Innovation Requires Innovation In Leadership' 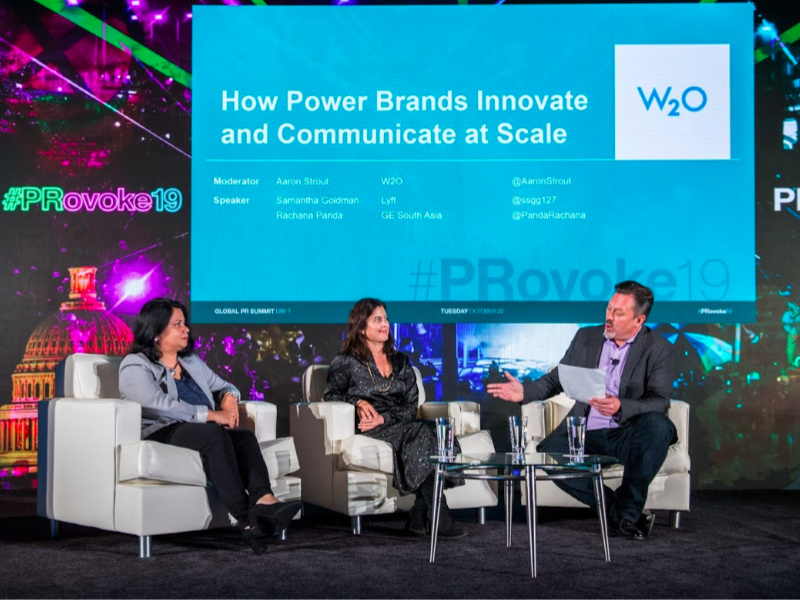 Comms leaders from GE and Lyft discussed what it takes for a company to be truly innovative, and the importance communications plays in this process.

WASHINGTON — It doesn’t matter how long a company has been around — Lyft, for instance, is approaching its eighth birthday, while GE is looking at 130 — truly being an innovator requires more than just new ideas, but a mindset and mode of operation that permeates the company.

“Leadership in innovation requires innovation in leadership,” said Rachana Panda, GE South Asia chief communications officer, adding that to further new ideas you have to “think of leadership in a completely different way.

Panda said innovation also requires a company culture that fosters invention. “And communicating is something that stretches across and connects all these three,” she said.

Speaking at PRovoke19 in Washington, Panda, along with Lyft Business head of marketing Samantha Goldman, explored the multiple layers required to encourage and sustain innovation — of the kind that has real impact on people’s lives as well as business.

On one hand, Lyft and GE are approaching the topic from very different experiences — GE a multinational conglomerate dating back to 1892, before cars were widely available, and the ride sharing service Lyft, which was founded as a disruptor.

Panda and Goldman , however, were in sync about the critical role that innovation plays in terms of serving stakeholders — and the importance communications plays in turning big ideas into real-life services and products that make a difference.

“It’s really about being relative to your audience,” Goldman said.

Goldman’s insight into the subject come from real-life experience at Lyft, particularly when the ridesharing service — which users traditionally control from an app — decided to get into the healthcare business by providing Medicare and Medicaid patients with rides to medical appointments.  The challenge: “We are providing rides for people who don’t have a smartphone,” she said.

So supporting that service required Lyft not only to innovate around a new service that relies on landlines rather than apps, but also reaching the audience who would be served by it.

That, Goldman said, was bigger than expanding beyond digital marketing channels, but also building trust with the patients who would be using the service. This was done through creating connections with healthcare organizations, thought leadership around the benefits of ride sharing and highlighting the stories of people who have benefited from the service.

“It’s really about finding that way to communicate with that audience and knowing what they are going to be comfortable with,” she said. “We want to work with organizations our clients trust.”

Panda noted that innovation can, and should, be embraced by organizations of all kinds, as exemplified by the Indian government, representing more than 1.2 billion people, setting up labs in schools around the country, “creating curiosity in the minds of students” — while creating the next generation of innovators.

“Once these students understand, they start asking questions and they start creating solutions of their own,” she said.

Those creators as well as individuals  that benefit from innovations — such as mobile ultrasound service for remote parts of India and China and wind turbines — are the best means for conveying their importance.

“People are why we do things. It’s all about people. It’s all about beneficiaries’ story, talking about people on the ground,” she said. “We also talk about the impact a project can bring in, and not just about our customers or solutions or our product, but also our community. That’s a big, big story we have.”