Please refer to our Privacy Policy for important information on the use of cookies. By continuing to use this website, you agree to this.
Home Latest PRovoke19: "Don't Be Afraid To Challenge The CEO" 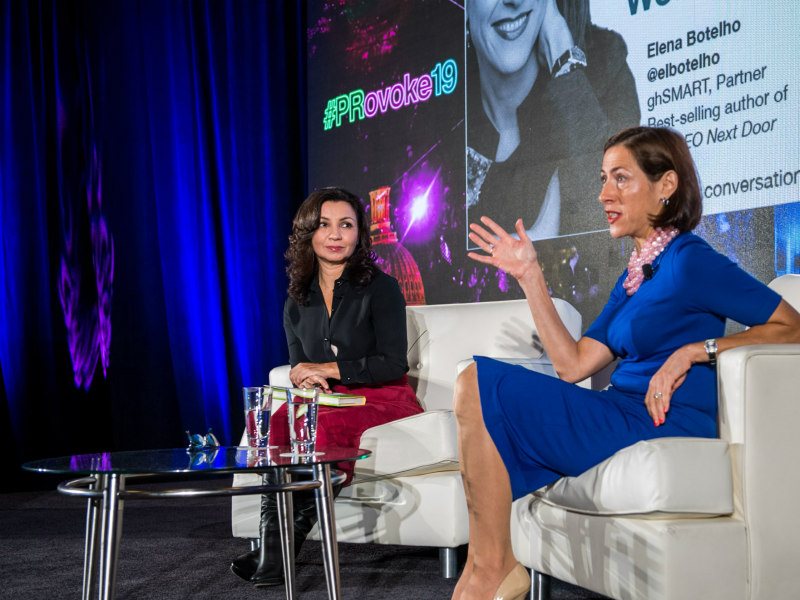 PRovoke19: "Don't Be Afraid To Challenge The CEO"

The greatest value PR people can bring to client CEOs is to challenge them, heard delegates at PRovoke19 in Washington, DC, today.

WASHINGTON, DC — Public relations people need to actively challenge CEOs if they hope to deliver value to their clients, according to ghSMART partner Elena Botelho, who kicked off Day One of PRovoke19 by outlining how ordinary people can be transformed into world-class leaders.

Botelho made the comments during a conversation with H+K Strategies CEO AnnaMaria DeSalva, which also explored ghSMART's research into the factors that underpin CEO success.

Accordingly, continued Botelho, her "silver bullet" is for comms advisors to "engage with the CEO at the level of intent, not the level of task, and don’t be afraid to challenge them."

"It will make you an absolutely standout advisor to your CEO," she noted.

Botelho's research also found a significant disconnect between the factors that help executives get the top job, and the reasons that underpin CEO success. "Often what makes one look the part and what leads you to deliver results aren’t the same thing," she said of the research, which spent 25 years analyzing more than 18,000 leaders.

"The real secret of CEO behavior is not intellectually grasping [DARE]," she added. "It’s doing them relentlessly and simple things like showing up on time for meetings."

Accordingly, Botelho also noted that “your confidence, your likeability, your charisma actually have no impact on performance." Instead, she cited that many CEOs have seen themselves as the underdog at some point in their career. Moreover, a good CEO is also one that is comfortable making mistakes.

"It’s not the nature of the mistake itself that made the difference, it’s how they processed it," she explained. "It’s all about making the most of the mistake for the learning of yourself and the organization."

After years of advising CEOs, furthermore, DeSalva noted that her new tenure as H+K CEO has helped her understand the importance of decisive decision-making. "As a new CEO, it's very tempting to want to study and learn and listen," she pointed out. "Often times, it's not the quality of decision-making but the pace of decision-making that's important."