Please refer to our Privacy Policy for important information on the use of cookies. By continuing to use this website, you agree to this.
Home Latest PRovoke19: Douglas Rushkoff Urges PR People To Join "Team Human" 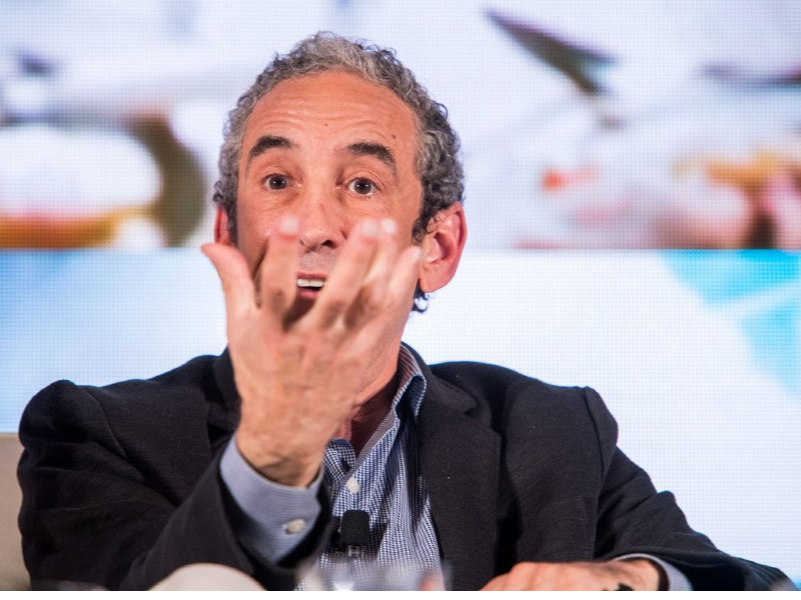 Will technology—and artificial intelligence—shape the way the human race evolves in the years ahead, or can humans control the development of technology and AI so that they serve humanity?

WASHINGTON, DC—Will technology—and artificial intelligence—shape the way the human race evolves in the years ahead, or can humans control the development of technology and AI so that they serve humanity rather than the other way around? That was the big question raised by media and technology critic Douglas Rushkoff, on day two of PRovoke19.

Rushkoff was speaking on a panel, sponsored and moderated by Weber Shandwick, entitled “Team Public Relations: Pro-human or not so much?”—a topic delving into the issues raised by his latest book, “Team Human,” which warns that “society is threatened by a vast antihuman infrastructure that undermines our ability to connect.”

Gail Heimann, president and CEO of Weber Shandwick, began the discussion with a review of recent thinking about the human elements of marketing and communication and the influence—potentially enabling, but often pernicious—of artificial intelligence, highlighting the need for greater creativity and empathy in a more technologically sophisticated world.

According to Rushkoff, “The tragic flaw in the framing of this discussion is so much of it asks how can we as people react to the inevitability of technology. How can we anticipate technology so we are ready for it. That’s the opposite of how I think about the future, which is that it’s something we are shaping right now, with our decisions.”

For public relations people, he suggested, that raised a critical challenge. “The tradition of PR is asking how do we get people to think this or to do this, and that’s a really tempting way to think about technology too. But PR and technology should be about allowing people to do new and better things, opening new possibilities.”

Rushkoff, once described as a “techno-utopian” but more recently a skeptic regarding the impact of new technologies and social media, warned of the alienating effect of new technologies. “When you have a Skype conversation with someone you can’t tell if their breathing is syncing up with yours or their pupils are dilating in response to something you say. They might say they agree with you, but you don’t get that hit of oxytocin you get in a real conversation. And you don’t blame the technology, you blame the person.”

He even suggested that companies—looking at new media through a commercial lens—might be encouraging the alienation that results from so much impersonal contact. “The more alienated people are the more likely they are to want to buy something to fill that hole.”

The answer, he suggested, was for people to assert greater control over the way new technologies and new media develop. “If media are not consciously seized by people seeking empowerment, they’ll be seized by someone else. Whoever controls media controls society,” he said.

Drawing on the history of new media, he pointed to the development of the written word, which was used by monarchs and religious leaders but inaccessible to ordinary people, and the development of the printing press, which was likewise immediately seized upon by the elite. “The lesson is that new media are always controlled by the elite and ordinary people are left with the last generation of media. And now you have social media and [Facebook founder and chief executive Mark] Zuckerberg.”

As a result, “the party of the internet became a kind of Tupperware party, it was the cooption of a social network by commercial interests. Kids on Facebook today think that if they play it right they can become an influencer. That’s the prize. It’s not about engaging with one another. So when they find out that one of the people they follow is getting paid, they ‘sold out,’ they didn’t even know what that term means. If everything is about followers, you lose the human value and the ability to connect, which is subsumed by the idea that I am competing with you for followers, and for sponsors.”

As a result, “The experience of community engendered by social media was quickly overtaken by a new bias toward isolation.”

Chris Perry, chief innovation officer at Weber Shandwick, sought to offer a more optimistic counterpoint. “The platforms control the frame but what’s happening inside the frame is what’s important. We have to pay attention because the rules are changing. We don’t want increasing intelligence without increasing EQ. We need people who can bring human elements into the design.”

As for the challenge facing communicators. “The most useful skill we need is the ability to solve problems, and we are facing problems we have never seen before in terms of disinformation. We have to figure out how we establish basic coherence in a landscape designed to inhibit your coherence?”

Ultimately, Rushkoff outlined what he thought a victory for “team human” might look like: “This can be about a renaissance, not a revolution. In a renaissance, you see old values restored, often the values that were lost in the old renaissance. In this renaissance we are seeing a return to the idea of the commons, to peer-to-peer communications, to localism, to distributed power. It’s what you see with Burning Man and craft beer and Etsy and Greta Thunberg.

“Team human does not reject technology. But we must take a stand and insist that human values are folded into the development of AI and cloning and virtual reality and robotics. If you want to lead this renaissance you don’t want to just technologize humanity, you want to retrieve human values through technology.”