Please refer to our Privacy Policy for important information on the use of cookies. By continuing to use this website, you agree to this.
Home Latest PRovoke19: Growing An Agency Via M&A Is Not For The Faint Of Heart 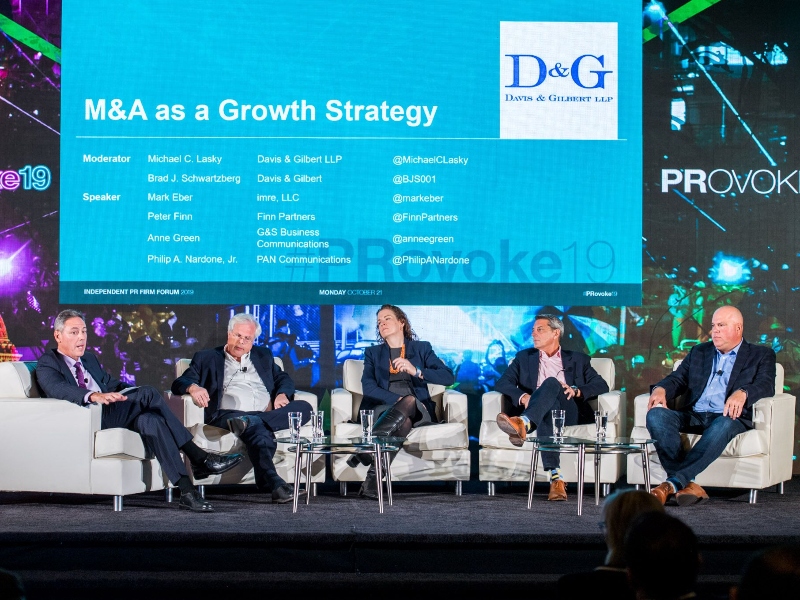 PRovoke19: Growing An Agency Via M&A Is Not For The Faint Of Heart

Growing a firm through mergers and acquisitions is “not a hobby,” Peter Finn, managing partner of Finn Partners, told the audience at the Entrepreneurs’ Forum

WASHINGTON, DC—Growing a firm through mergers and acquisitions is “not a hobby,” said Peter Finn, managing partner of Finn Partners, an independent public relations firm that has made 18 deals since its launch in 2012. Finn told the audience at the Entrepreneurs’ Forum in Washington, DC, that he devotes half of his time to mergers and acquisitions.

“It’s not just the individual deals that take time,” said Finn. “We invest a lot of time cultivating relationships, with a number of firms that help to broker deals—because they will bring you prospective acquisitions and you want them to understand your business and what you’re looking for—and attending events like this one, where independent PR firms gather.”

Finn was joined on the panel, sponsored and moderated by New York-based law firm Davis & Gilbert, by three other firms—less prolific acquirers but with recent experience in building their business through M&A.

“We needed a presence on the west coast. Clients were looking for agencies that were bicoastal, and we had employees in Boston who were interesting in relocating,” said Philip Nardone, president and CEO of PAN Communications, which has made two acquisitions. “This past year we found ourselves losing out to global firms, hearing from prospects and clients who wanted one international branded agency, and our strategy of using partners in other markets wasn’t working, and so we went out and acquired a firm in the UK.”

Added Mark Eber, partner and president of Baltimore-based Imre: “Ten years ago we acquired a local digital firm in Baltimore to get in that business, it was a capability we were not currently offering. We have had several opportunities, but none of them seemed quite right in terms of cultural fit. This year we had the opportunity to buy an automotive-focused firm in Los Angeles, which was a good fit to our existing west coast business, but it had a strong second tier of management and a strong culture and we thought it would be a good fit.”

And Anne Green, who along with former partner Ralph Katz sold CooperKatz to G&S Business Communications in August of last year, now serves as principal and managing director of G&S, where she continues to eye acquisition targets.

The panel took as its starting point a study conducted earlier this year by Davis & Gilbert, which reported on 61 transactions in the public relations sector, with 54 different buyers—76% of them independent PR firms, compared to 16% of acquisitions by public holding companies and 8% by private equity. They were buying firms with a digital and technology focus (28%), general practices (16%), financial services and healthcare expertise (11% each).

Moreover, more than half of the acquired agencies were small or boutique agencies (under $6 million in fees), compared to just 10% with fees of more than $25 million.

Said Brad Schwartzberg, co-chair of the corporate practice group at David & Gilbert, “The landscape has changed in terms of who’s buying and who’s selling, but the deal volume is as high as it has ever been. It’s difficult to keep growing organically year-on-year, and we see that firms are increasingly looking to supplement that with strategic and disciplined acquisitions.”

Acquisitions are hard work for the sellers too, said Eber. “If you are looking to sell, make sure you know the numbers and can break down the numbers every which way, because you are going to get a 15-page governance questionnaire. We have talked to people who are running 15-person firms who just were not prepared to provide the kind of financial information we were looking for.”

And Green focused on the emotional toll that deals can take: “It’s not just a matter of time. It’s costly as well, to do it right, and it takes an emotional toll.”

While much of the work involves bridging the gap between the seller’s valuation of the firm and what the acquirer wants to pay—according to Finn, “the seller’s value is one times annual revenue, while the buyer is typically looking for five times an average of the past five years’ EBIT”—the biggest obstacle is often cultural.

Said Green, “Our first meeting was white-boarding what the future looked like for each of us as individuals”—the two partners at CooperKatz and the principals of G&S—“as well as discussing the cultural fit. We talked as much about the emotional growth curve of our people as we did about the money. And as we got into the final months, Ralph stayed focused on the transaction while I was very focused on going forward, and setting us up for success going forward.”

Culture is a critical success factor for Finn too. “Most of the acquisitions we make the seller is talking to multiple potential acquirers,” he said. “In most cases the differentiator for us is our culture, and our collaborative spirit. I ask potential acquisitions to talk to the people we have acquired, because they are our greatest advocates.”

Even so, Finn said, most acquisitions take a full year from first contact until closure. That means M&A is not for the faint of heart.

And, needless to say, the hard work doesn’t end when the acquisition is concluded. In fact, according to Eber, “The real work starts after the deal.”

Interestingly, two-thirds of the firms that implemented either a long-term incentive plan or a contract equity program saw more than a 5% increase in both revenue and profit—significantly outperforming the market as a whole.

Other trends that correlated positively with improved financial performance: