Please refer to our Privacy Policy for important information on the use of cookies. By continuing to use this website, you agree to this.
Home Latest PRovoke19: How IKEA Earned Its Licence To Operate 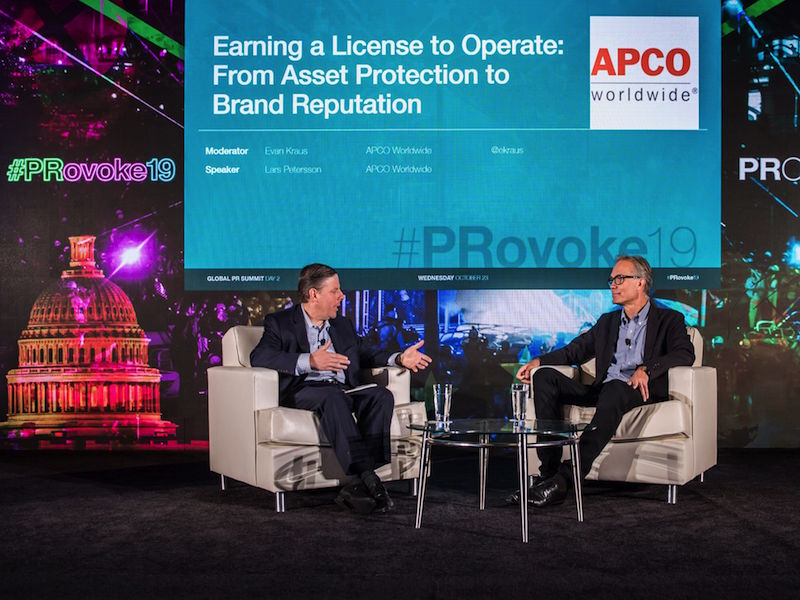 PRovoke19: How IKEA Earned Its Licence To Operate

Former president of IKEA US Lars Petersson told the Global PR Summit that “there is no space to fly under the radar any more” when it comes to operating a business.

WASHINGTON, DC — There is “no space to fly under the radar any more” when it comes to operating a values-led, sustainable business, according to former IKEA president Lars Petersson.

Speaking at PRovoke19 in Washington DC last week, Petersson – who served as IKEA president in multiple global markets, most recently in North America, and is now a senior counsellor for APCO Worldwide – explored how IKEA lives its vision to “create a better everyday life for the many people.”

In an onstage conversation, he told APCO Worldwide’s president and MD of Washington DC operations Evan Kraus that the Swedish business had “earned its licence to operate” by ensuring that everything the company did was “connected to its values and culture.”

On the evolution of IKEA’s approach, Petersson said: “We use 1% of the world’s wood and cotton in our products, so how do we make sure we do a good job there? We had our first environmental strategy in 1986 and we had some hiccups in the beginning: we had a real challenge with formaldehyde in the 80s as it allegedly caused cancer and we had it in our bookshelves. There were also issues around child labour.

“We decided that if we are for ‘a better everyday life for people,’ we have to be that throughout the company. We stopped selling carpets from Pakistan because they were made by children, we made sure Greenpeace assessed us, and we developed our sustainability strategy.”

Petersson also spoke about the challenges of transporting IKEA’s values, rooted in Nordic culture and society, to other parts of the world for new store openings: “It’s important to be clear on who you are, and wherever we are, we have a robust discussion on who we want to be here, and whether we can make a positive change without destroying the brand.

“We’ve had discussions about risks and opportunities in 42 countries. For instance, in Japan, there are hardly any women managers, but they are the biggest decision makers around the home. So we employed smart women and branded ourselves as an employer to women.”

Petersson said IKEA’s long-time support for LGBT rights had created tension in some new markets, including in Moscow and Sicily, where the firm experienced “a very public conflict” around its ads featuring gay couples: “We had enormous support out there. Of course there are risks, but we do it because it’s the right thing to do.”

He added that with shifting shareholder, analyst and investor attitudes, sustainability was now crucial for long-term survival: “Even if the economy dips, the strongest companies that survive will still look at those questions. Take the retail apocalypse as an example: there are not going to be many players around, and marketing a top for $2.99 to young women who are starting to look at Greta Thunberg and have passionate ideas about the future of the planet and awareness of workers’ conditions and pollution is not the right solution. If you are just working for short-term profit, that is not going to be a good way to survive.”

As to the question of how to balance transparent communication and authenticity with possible cynicism about the company’s actions, Petersson said: “This is the hardest question. You really never know how people will see you, even internally. The only solution is to be 100% open because anything else would be to paint a picture that isn’t true which will come back to haunt us.

“There is no space to fly under the radar anymore – you can’t say you won’t involve yourself in sensitive issues around sustainability and human rights. It’s about transparency, the connection to your values and culture, and ultimately the comms around that being completely coherent.”

And while IKEA will always be vocal on sustainability and human rights issues, Petersson said it was important that anything leaders stood up for was closely connected to the business: “We build wind farms because we use a lot of power. We talk about diversity and inclusion because we work with a lot of people. We introduced veggie balls alongside our meatballs because we have restaurants. It’s tempting to jump on hot-button issues, but I don’t think we should take a political standpoint, for instance on gun violence, if it’s not connected to the business.”