Please refer to our Privacy Policy for important information on the use of cookies. By continuing to use this website, you agree to this.
Home Latest PRovoke19: “We’re Going To Need A Lot Of Sharp Elbows” 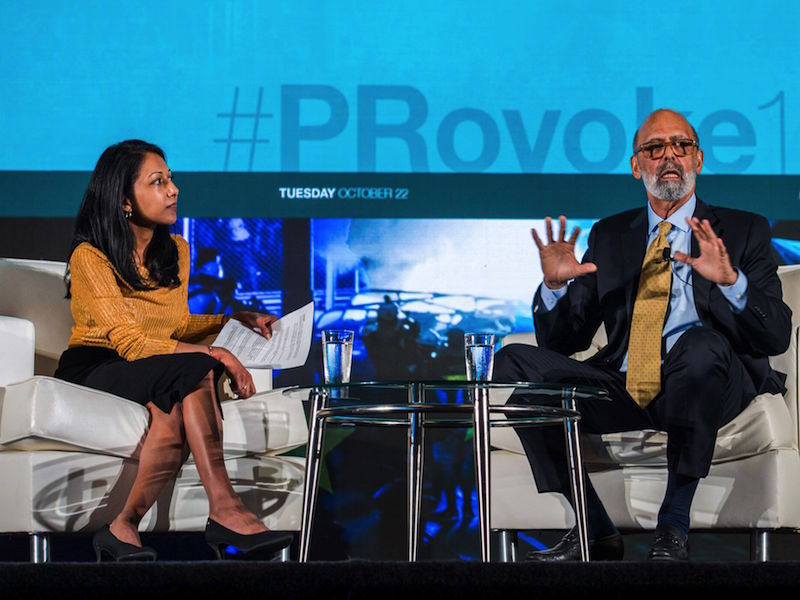 PRovoke19: “We’re Going To Need A Lot Of Sharp Elbows”

In a discussion on diversity, Dr. Michael Lomax, the president of the United Negro College Fund, said people of color still faced enormous obstacles to inclusion.

WASHINGTON, DC — Young black people still face “insidious obstacles” to inclusion at work and in society that will need “a lot of sharp elbows” to break through, according to Dr. Michael Lomax, the president of the United Negro College Fund.

In a fireside conversation at PRovoke19 in Washington, DC with the Holmes Report’s executive editor Aarti Shah, Lomax talked about the ongoing challenges of achieving real diversity and inclusion in all sectors, including the creative industry.

He said: “In agencies, there have always been people who don’t look like us. I grew up in LA in the 50s and 60s and my parents owned a weekly newspaper. We had a lot of dealings with major American corporations who would not advertise with black newspapers. Not only the outrage of that, but that when they did, they would not use images of black people in their advertising. I’ve seen the invisibility of people who look like me.

“This is just another one of those bastions of white male domination where we have to fight our way in. I wouldn’t even watch Mad Men, it pissed me off just to see it, because I grew up in a time when who was in charge didn’t look like us, but just assumed they had access to our pocket book and our decisions.”

Lomax said things had moved forward “glacially” and it was critical that diverse voices were reflected in brand communications: “It’s a different age, and there is recognition that different people have to be reflected in communications, storytelling and messaging, and it has to be authentic. On the creative side, stories are now coming from people who are more diverse: that’s powerful messaging and it seems to be resonating with larger audiences. It’s short-sighted not to push harder on this.

“The world is changing, but it’s not changing quickly enough. If the stories companies are telling are unlike the world I live in every day, why should I spend my money with you or respect the institution you stand for? I want the people impacted by what we do every day to tell our stories, because if I leave it to someone else, they are likely to reinforce a negative narrative.”

Lomax said young black people trying to enter the creative or tech industries were often “set up for failure” through bias in the recruitment process: “A lot of objections are not legitimate, they are just people being uncomfortable with people who don’t look like them. When companies have barriers to do with subjective decisions, we have to do a better job of preparing first generation black kids to have soft skills to manage that environment, not just well-designed internships.

“We not only have to build diversity, we have to understand that the differences that diversity brings are going to become uncomfortable.”

Young people of color also experience a lack of support when they do manage to enter the workplace, said Lomax: “New industries shouldn’t be a bastion of privilege or exclusion, but it’s down to young people who think only people who look like them are the only capable, qualified people to do the work, and I don’t know how to break through that. When companies do open the door for young black people, they are not given the support and training they need to compete. They say ‘we had some interns but they couldn’t handle it.’

“Bringing people who are different into organisations that have excluded them is a painful process, and you have to be prepared for all sorts of emotional and psychological assaults. That’s why black colleges are so important for kids to at least have opportunity to develop their skills and talents and build the armour that enables them to go out in the world and fight the battles they will need to fight every day.”

Talking about the United Negro College Fund’s long-running A Mind Is A Terrible Thing To Waste campaign, which launched in 1972 and has raised more than $2.2 billion to help more than 350,000 minority students go to college and beyond, Lomax said: “There’s something about the slogan which is universal and powerful, especially in the context of the civil rights movement when black Americans were still being marginalized and brutalized.

“It was written by someone at an ad agency who was a poet: it’s a beautiful insight, that if we’re going to transform our nation and the lives of young people we’re going to do it, at least in part, through education.”