Please refer to our Privacy Policy for important information on the use of cookies. By continuing to use this website, you agree to this.
Home Latest PRovoke19: You’re Not Really A Purpose-Led Brand Unless You Change Your Business Model 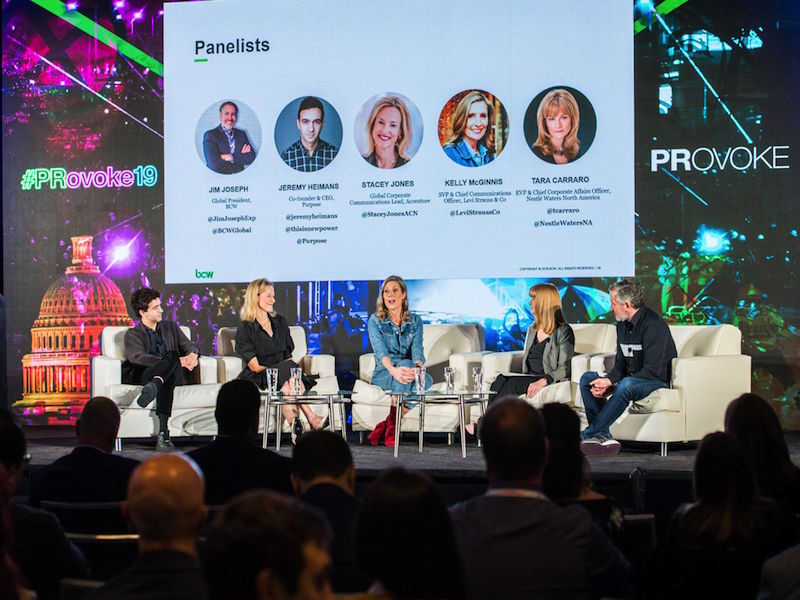 PRovoke19: You’re Not Really A Purpose-Led Brand Unless You Change Your Business Model

Jeremy Heimans, CEO of movement-building organisation Purpose, said too many companies are “doing things around the edges” and cannot actually achieve change.

WASHINGTON, DC — Too many brands that claim to be purposeful are “doing things around the edges” when they cannot actually achieve societal or environmental change unless they make fundamental changes to their business model, according to Jeremy Heimans, CEO and co-founder of movement-building organisation Purpose.

In a session on brands being authentic around purpose at PRovoke19 led by BCW global president Jim Joseph, Heimans said: “One thing we urge brands to do is think about change they are well-positioned to make. A lot of brands are just not positioned to make change. They have to work out what their superpower is: can they really shift behaviour, or the debate, or policy? Companies don’t operate in a vacuum. If they take an issue and champion it, it needs to be part of a wider purpose strategy within an ecosystem that includes governments and non-profits.”

He cited the contrast between Pepsi’s failed attempt to start a movement with its widely-derided Kendall Jenner ad, with Coca-Cola’s more authentic campaign that sought to destigmatize being gay in Brazil – where a common pejorative description of homosexual people is “that Coke’s a Fanta” – by producing Coke cans filled with Fanta and letting consumers run with the idea, without any paid support.

Heimans said: “What Pepsi did was an entirely top-down undertaking, completely disconnected from what it does in its core business. The ad was broadcast into the world and Pepsi said look ‘how virtuous we are.’ While Coke hacked into a public debate, and there was a wave of activity throughout Brazil where people owned it and started making their own content and merchandise around it. Coke had credibility, with a long history of doing work in the LGBTQ space, and calculated that taking a stand would outweigh the loss of favourability.”

He said there was a danger that the notion of “purpose” was devolving into the new version of the mission statement: “A company can express its reason for being, but that can be so divorced from its actual social contribution that it loses all meaning. People can run worthy ads, but where consumers will be looking is the core economic engine of the business. Any serious conversation about purpose needs to start with the question: are you harming the world or making it better? If it is harming the world, which most companies are, what can we do about the economic engine to mitigate that? It’s about aligning your business to what you’re actually doing in the world.”

Heimans said, for example, that oil companies had the problem of their core business function being misaligned with their messages and lobbying: “You can’t say you’re committed to carbon tax and renewables, while funding lobbying that undermines action on climate change.”

In terms of the role of communicators, Heimans said the industry needed to make the arguments within the business for change: “We can’t fix the supply chain or work on the new business model, but we can make the case for a higher bar, because if companies don’t, their talent proposition is restricted and their licence to operate is at risk.

“We’re seeing climate strikes and the moral authority of kids speaking truth to power, and saying that companies’ comfortable rhetoric of purpose isn’t enough. Brands might feel they can get away with it today, but if you don’t go deep, quickly, you do risk doing a lot more damage to your brand.”

Heimans said that, in addition, “the days of the hero CEO are long gone” and conviction CEOs “who are wonderful at articulating the rationale but haven’t changed the functional business model” were a risk.

McGinnis said every decision Levi’s made was through the lens of its values, and most initiatives started with employees: “We’ve always taken a stand on issues that really resonated, from being the first to desegregate our factories to employees wanting us to take action on the refugee crisis in Europe, where we have retrained refugees as tailors, and going in on gun violence prevention, asking people not to bring guns into our stores.

“Since our fundamental purpose is self-expression, this has also manifested in encouraging people to express themselves though voting and volunteering for political organizations, working with Patagonia on the Time To Vote movement to get companies to give employees time off to vote.”

Accenture’s Jones agreed that employees were a key driver of the company’s purpose-driven activities: “Two thirds of our half a million staff are millennials, and they want to come to work every day thinking about their role in our purpose and bringing that to life. As communicators, we need to use our influence to be well-connected in our organisations, plug in deeply to the opinion leaders within the business, and be active in shaping that opinion with them.”

Finally, at Nestlé Waters, Carraro said the “sweet spot” was making a product or a brand connect to what is important to consumers, stakeholders and communities: “As communicators we have a unique opportunity to get comfortable being uncomfortable, and being the business co-pilot that’s raising those topics internally. We need to push hard to say the status quo is not enough and we need to create an environment where have the social licence to grow and build brands.”