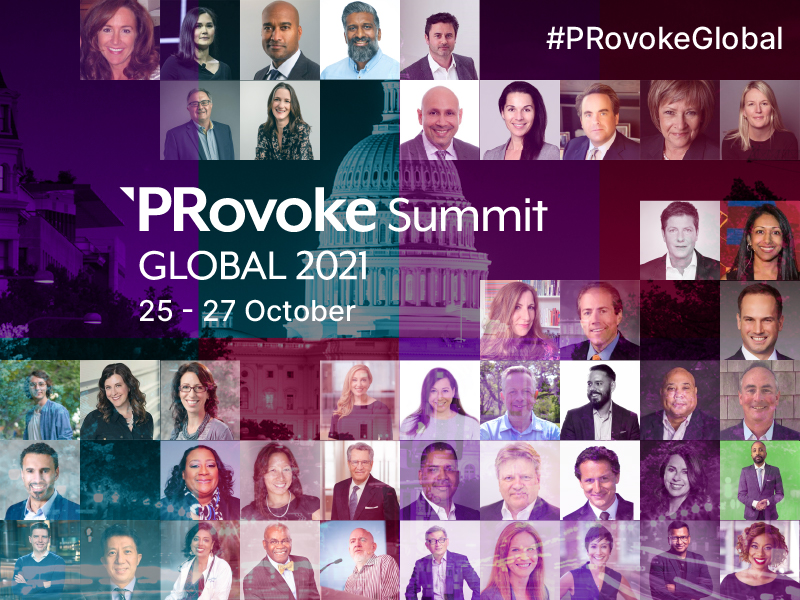 Numbers, rising expectations, the future of work, strength in diversity and enduring opportunities come to the forefront at our 10th Global PR Summit.

Our 10th Global PR Summit was not supposed to be another virtual affair, but we live in unusual times. And that was reflected by the event's 'Reset' theme, spanning in-depth examinations of the critical issues facing the public relations industry during the Covid-19 era.

All of which meant there was a lot of compelling content to process across the event's three days, which you can find via the session videos and coverage. So, here are five lessons that we have distilled from the event, focusing in particular on how communications roles and functions are changing during a time of profound transformation.

1. It's a numbers game
The perception that PR professionals don't necessarily understand the financial side of running the business is probably unfair, but it remains the biggest hurdle holding them back from business leadership roles at major companies. That, at any rate, is the conclusion of Jackson Jeyanayagam, a PR agency veteran who now oversees Clorox's direct-to-consumer businesses. Given his insight into C-suite thinking, and his experience across in-house marketing and agency roles, Jeyanayagam's comments demand attention, in an era when the value of the communications function has — ostensibly — never been higher. But his insights may carry a measure of discomfort with them, not least his observations that communications strategy is not necessarily seen as being the unique preserve of the public relations industry, and that communicators regularly do themselves a disservice by steering clear of numbers and metrics.

None of this should come as a major surprise to industry observers, particularly the last of those points, which was further described as the "measurement ceiling" by Omnicom PR Group CEO Chris Foster. Connecting public relations to sales has long been held up as the holy grail in terms of proving the value of public relations. Jeyanayagam noted that content to commerce conversion metrics offer the potential to fulfil this promise, but warned that PR firms are still seen as "far removed from the realities of the business."

2. Connecting dots & decisions
"It’s not true that we can’t connect the dots and drive the business," noted Jeyanayagam, and the first part of that observation, at least, was reinforced by numerous sessions demonstrating the growing influence of in-house communicators and their agency partners. This was highlighted, in particular, by corporate efforts to address some of the critical social issues of our time, including health inequities, climate risk, geopolitics and employee safety.

During the Summit's opening keynote session, for example, GSK consumer health SVP Dana Bolden and Walgreen Boots Alliance chief communications officer Aaron Radelet both pointed out how crucial the communications function has proven in terms of building effective partnerships. "It’s given us a really strong platform," explained Bolden. "During the pandemic we’ve used communications to be that bridge between societal, commercial and public health. Reaching out to places of worship wouldn’t have happened 10 years ago, but communicators are increasingly becoming the decision-makers in the organisation."

And it was taken further by Molson Coors CCO Adam Collins, who explored the transformation of the communications function towards a more strategic perspective. "It’s a mindset shift for people within the communications team as well, as we move from ticket takers to decision makers," he said. “We need to view ourselves as strategic advisors. We need to have that view of ourselves just as much as everyone has that view of us.”

3. Back to the office? Not so fast
PRovoke Media research has already uncovered how divided the industry is on its return to office plans, and what hybrid working might look like. That proved to be a recurring theme throughout the event, in numerous sessions that examined exactly what the future of work will look like in a post-Covid future. And, as you might expect, there was considerable divergence — from Canadian PR agency Energi, which has given up its office to go fully remote, to UK shop Frank, which barely countenanced life outside the office.

But if there were plenty of differences in approach, there was also considerable agreement that the relationship between employer and employee has been fundamentally reshaped. “Flexibility has gone from a wish or a preference to an expectation,” said Laura Duda, The Goodyear Tire & Rubber Company’s chief communications officer. “Going back isn’t really an option.”

Of course, a host of concerns persist, ranging from the impact on culture, to work-life balance and the intersectional challenges facing women and people of colour. "Three things have changed in terms of employee expectations: workforce flexibility is becoming a norm rather than an exception; wellbeing is a strategic lever to attract and retain talent; and internal adoption of technology and new tools," said Lenovo Asia-Pacific executive HR director Subhankar Roy Chowdhury.

4. Brilliant differences
While the PR industry's diversity woes are well-documented, the Summit suggested a measure of progress to support all of the promises and commitments that have been made. That was reflected in three particular ways. First, the investments that major corporates and agencies are making to address the issues of underserved communities, whether health inequities, the digital divide or social injustice. Second, by actively demonstrating how better diversity and pay equity make PR firms more profitable. And, third, by recognising that expanding the horizons of what diversity means can only bring further benefits.

The PR industry also has a poor record on neurodiversity, for example, which is the subject of Jessica Nerren's research at California State University. Including people whose brains are "wired differently", she said, will ensure the PR industry does not miss out on a “reserve of brilliance” that is going untapped.

5. Opportunity vs risk
We live in uncertain times, with events often conspiring to present significant risks, in areas such as geopolitics, climate change, and healthcare. And while reputational risks are good business for the PR industry, many sessions noted the importance of being just as alive to the opportunities on offer. In geopolitical terms, for example, brands have the ability to bring people together in an era of polarisation. And when it comes to health inequities, corporates can clearly make a difference by meeting their audience where they are, and ensuring their voices are heard.

But grasping these opportunities also requires an appreciation of behavioural science, something that has been discussed at PRovokeGlobal since the first of its 10 editions. Now, just like then, it is clear that "doom and gloom messaging" can be counterproductive when it comes to driving behaviour change. That was brought home by both USCF's Dr Monica Gandhi and the International Well Building Institute's Rachel Hodgdon, and is given added urgency by the challenges posed by rampant misinformation.

"We know doom and gloom messages have not inspired people to take action, in the way they are living their lives, running their businesses, engaging communities and voting," said Hodgdon.