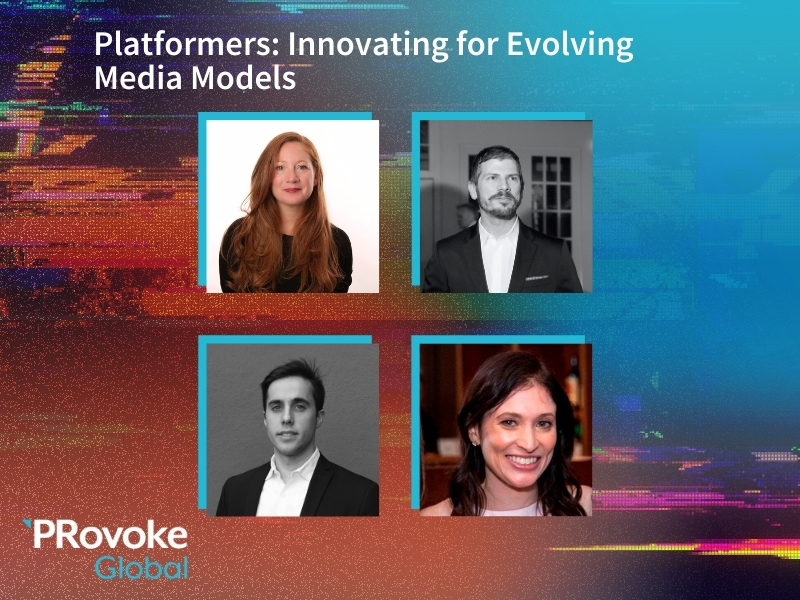 The opening panel of PRovokeGlobal 2020 examined new ways in which communicators, journalists and media brands are identifying the right path for their stories.

One of the most daunting aspects of a communications professional’s—and journalist’s—work is knowing how to use the multitude of platforms that exist to their best advantage. PRovokeGlobal opened with a panel moderated by Emily Duban, senior vice-president and partner of media and platforms at Fleishman Hillard (sponsoring), finding that, while increasingly sophisticated data analysis is required, it’s ultimately still an exercise in human judgment and insight.

For Cameron Batten, vice-president of corporate communications for Samsung, thinking across platforms is primarily an internal challenge. “Because of our size no action we take can escape public perception so we’re constantly educating leaders on the actions they take and how they will reflect in the public domain,” he said. “Our job is to make sure everyone understands the landscape so when they enter into it whatever they say is going to resonate with their audience.”

To understand what will make an impact with their own audiences, media outlets are relying more and more heavily on data. At Insider Inc, Olivia Oran, head of subscription strategy, “felt we were flying blind” before the company brought in a team of data scientists, who try to provide actionable insights that shape content and its distribution. “But the one thing I’d say is that you can’t just rely on the data,” she added. “It’s not going to tell you the full picture.”

Knowing when to make a story freely available and when to put it behind a paywall remains difficult. For stories relating to the coronavirus, Business Insider (BI) chose to make health-focused stories free while making business-oriented ones subscription-only. But the publication has found that it isn’t always so simple, especially when it comes to sensitive topics such as racial discrimination: sources invariably want the story to be free, while the company naturally wants to charge for hard-to-produce content.

An area where data has proved especially useful has been in identifying what people want to read. When Covid-19 first descended, BI saw traffic and subscriptions “nosedive”, Oran said. While regular staff were flummoxed, the data scientists determined that interest had shifted dramatically from business to health. BI had to change its content strategy accordingly overnight. It showed “the need to keep your platform flexible”, Oran said.

Data science is likely to play a bigger role in content creation itself. Francesco Marconi, co-founder and chief executive of Applied XL, a company that provides “computational journalism”, sees AI ultimately relieving journalists from writing “formulaic” stories about financial reports and the like to focus on higher value content. But he noted that just as humans have biases, so does AI, meaning that experts still need to question its analysis.

In employing various tools to crunch numbers and support the formulation of stories, Marconi sees journalists coming to function as something like a chief information officer or air traffic controller. The way they work might be changing, but trust will remain their “most important currency”, he said.

Indeed, the shift of journalists from representatives of a media organisation to individual “gurus” brands and even “mini media companies” in their own right seems to be gathering pace. In terms of distribution power, a journalist with millions of Twitter followers is probably more powerful than a strategy their company could devise, Oran noted. In some cases, “someone might hate the media brand but really trust you” as a journalist, a trend that has “shielded journalists from broader mistrust of the media”.

Nonetheless, when deciding what to prioritise—the journalist or the media outlet—Batten said it all depends on the story one is trying to tell. “When it’s a product story, absolutely you want to go into the influencer realm,” he said. “But we also benefit from our own channels and rely on traditional channels a lot as well, especially for human interest stories”.

For certain stories, people in Batten’s position may be required to rethink the way they convey the information. “The future of press releases is data releases,” said Marconi. “If there is access to data that tells the story of a new product, I think there would be huge demand from newsrooms [for that] rather than just your traditional coverage of a company.”