Please refer to our Privacy Policy for important information on the use of cookies. By continuing to use this website, you agree to this.
Home Latest PRovokeGlobal: Making The Link Between Climate Change & Health 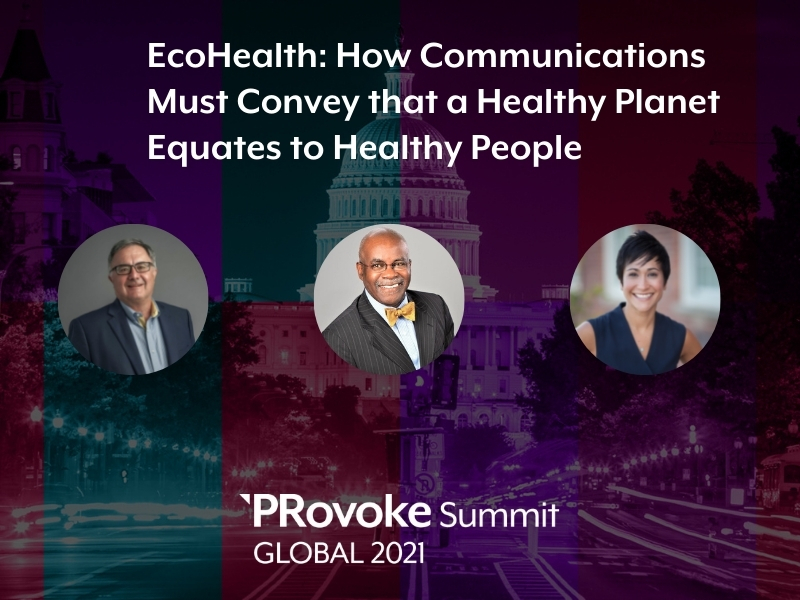 Communicators have a role to play in messaging around “EcoHealth” – the connection between a healthy planet and healthy people – despite misinformation, scepticism and the politicisation of science.

Communicators have a key role to play in shaping messaging around the emerging area of “EcoHealth” – making the connection between climate change and human health to prompt people to change their behaviour – according to speakers at the PRovokeGlobal Summit this week.

Leading the session, Finn Partners senior partner Bob Martineau outlined the key findings of the 2021 IPCC Report on Climate Change – described as a clarion call for companies to develop operating and communications strategies that address climate change – which links climate change and premature deaths linked with areas such as poor air quality due to emissions.

A World Health Organisation release later included the statements that “Climate change affects the social and environmental determinants of health – clean air, safe drinking water, sufficient food and secure shelter” and “Between 2030 and 2050, climate change is expected to cause approximately 250 000 additional deaths per year, from malnutrition, malaria, diarrhoea and heat stress.”

He said marketers needed to understand how climate change was disproportionally affecting the health of not just lower income and middle income communities and societies, but all communities, as well as “understanding the intersection of public health, care delivery and climate change and distilling that messaging to the individual perspective.”

Aluko said one of the obstacles to people’s understanding around how climate change affected them and their families was the current “difficult phase of emotional and intellectual conflict,” which has resulted in mistrust and misinformation, as well as “the misalignment of messaging” between stakeholder groups including public health, governments and the pharma industry.

But he warned that “Not one message works for all – to be effective messengers, marketers need to be insightful on cultural backgrounds and the marketing strategies and tactics that are most likely to resonate with diverse populations. Medicine and public health is not an exact science, but we have a lot of scientifically valid information, and we need to seek credible and verifiable thought leadership as sources.”

Asked what PR professionals could do to effectively communicate these now-urgent messages to citizens, panellist Rachel Hodgdon, president and CEO of the International Well Building Institute, said: “The report is more than cautionary, it’s a ‘Code Red’ moment and an opportunity from a communications and PR perspective for us to really come face-to-face with the fact that the messaging we‘ve been using around climate change isn’t working. We know doom and gloom messages have not inspired people to take action, in the way they are living their lives, running their businesses, engaging communities and voting.”

Hodgdon said the imperative was to get personal and make messages around climate change and the link with personal health more relatable, relevant and positive: “We need to make it about what you gain, as opposed to what you give up, about abundance rather than scarcity, and about you and your family – not just translating science to the mainstream and ‘polar bears clinging to the last ice floe’, which ultimately depersonalises the message.”

“We need to accept the fundamental premise that intellectual agreement and science has not prompted action by the public, and stop demanding altruism,” she said. “The only messages that work are tied to positivity and hope, not fear. Behavioural scientists also tell us that comparison and competition are effective: the more we show people a means to understand what their peers are doing and how they can aspire and join them in doing the right thing, the more we will be successful and prompt shifts in consumer spending, behaviour and demand.”

The panel also discussed who, after effective messaging has been crafted, makes the best messenger in these circumstances. In other words, who will people listen to? Aluko said people tend to listen to those they respect and those they trust, but the choice of messenger needed to demonstrate deep understanding of different demographics and communities around the world.

“The strategy around marketing is not new science. What is new is the realisation that strategies to address vulnerable populations have not been developed or prioritised,” he said. “This gap exists because of the absence of a deliberate process through content, context, channels and messengers to reach vulnerable populations so they too benefit from the opportunities of science. There needs to be awareness of health disparities and inequalities, and messaging needs to be customised to resonate.”

But he added: “That doesn’t necessarily mean messengers must be of the same ethnic background to be trusted. Messengers who have cultural sensitivity, empathy, and insight into individual demographic concerns, struggles and aspirations are the more effective ones. This is not a cookie cutter process: strategies must be customised, and part of that will be the choice of the messenger. A Caucasian messenger can be effective in Black and Brown environments if they understand the audience and the historical context of mistrust and suspicion. Respected community leaders, faith-based leaders or people of the same race may get that resonance quicker.”

Hodgdon agreed that peer-to-peer communications are often the most effective, so identifying the right people as messengers was critically important: “This is one of the places we dropped the ball early in the pandemic – it should not just have been just doctors and public health officials and politicians, but we should have gone more quickly to community leaders, spiritual leaders and celebrities. We missed some of our window to address scepticism and politicisation. We need to activate storytellers, people who capture hearts as well as minds. We think hitting people with data and facts will be most compelling, but it’s not.”

Finally, the panel looked at whether there were communications lessons from the pandemic that could be applied in making a clearer link between a healthy planet and healthy people.

Aluko said: “Marketers must understand the basic needs of consumers: 80% of illness is driven by social determinants of health – how people act, where they live, work, go to school, whether they have access to clear air, clean water, food and shelter. Messaging should be shifted to awareness of people’s environments, and taking personal responsibility for our health and surroundings. Had this been emphasised consistently in the early stages of the pandemic, we would have had a shot at a more optimal output.”

Hodgdon concluded that the key to effective communications in this area was to “start by acknowledging that climate change and the pandemic and what we’ve seen play out are inextricable. They’re not different: those that have the least, suffer the most.”

“There is now a profoundly elevated level of awareness across the world that the air we breathe impacts our health – that’s just as much related to climate as an airborne disease, and we can capitalise that in this moment so people understand that climate change is also a human health issue. It’s not a moment to be wasted for the communications community, where we can show how this impacts people and their lives. We can make the link to the climate conversation and keep it much more local, related to what we want for our lives and our children.”