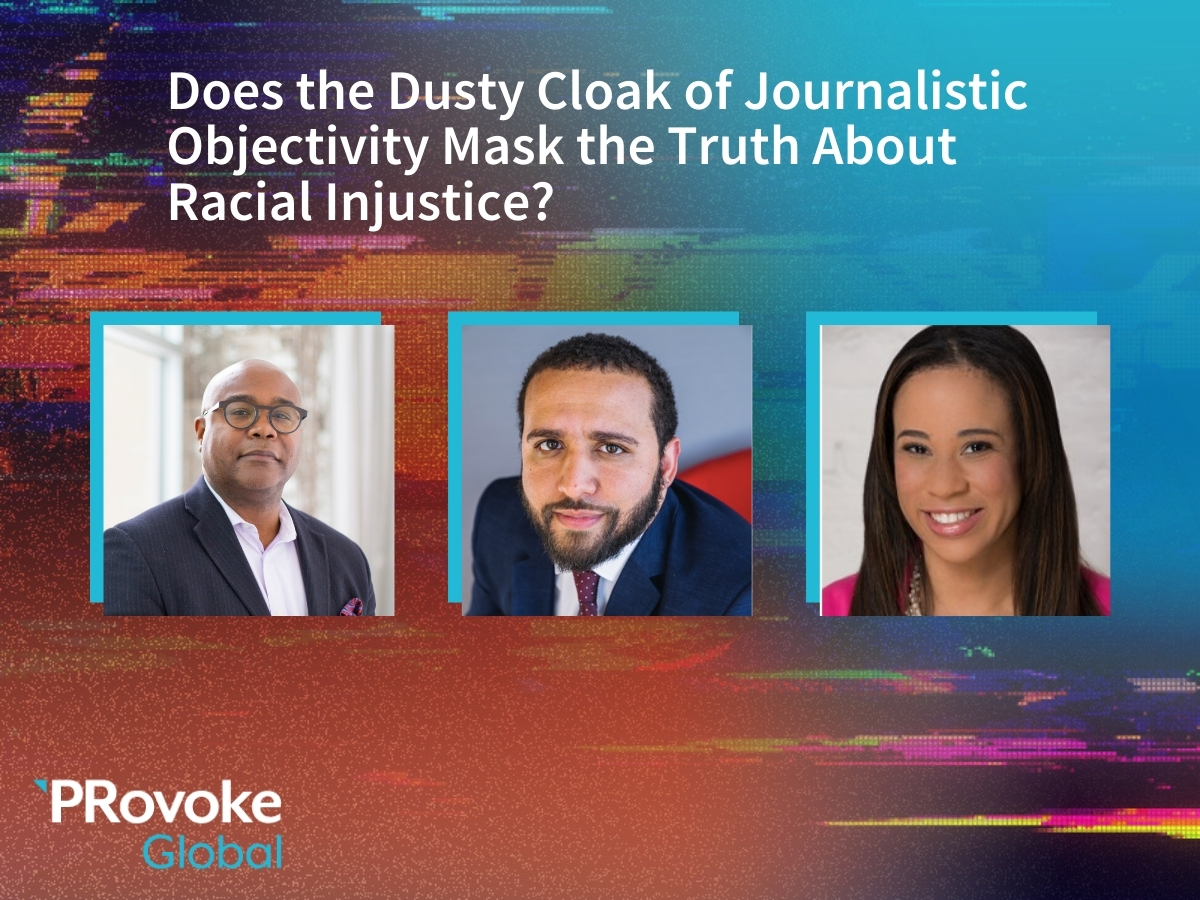 Words matter: when organizations talk about “systemic racism” it is fundamentally different from talking about “diversity.”

The language we use when discussing important issues can change the nature of the debate—when organizations talk about “systemic racism” it is fundamentally different from talking about “diversity”—attendees at PRovokeGlobal heard on Wednesday, during a panel featuring CBS News journalist Wesley Lowery.

Sponsored by Weber Shandwick and moderated by Emil Hill, executive vice president at Powell Tate Weber Shandwick, the panel started with a provocative question, “Does the Dusty Cloak of Journalistic Objectivity Mask the Truth About Racial Injustice?” It’s a question that Lowery answered, unsurprisingly, in the affirmative, suggesting that shifting standards of objectivity were being used to mute black voices.

“When people from marginalized groups speak up there can be an institutional backlash,” said Lowery. “In journalism, that backlash is expressed in standards of objectivity. But when people bring new perspectives they are going to challenge norms. That’s not an affront to journalistic standards; it’s the process by which journalism gets better.”

He suggested that the notion of objectivity was itself subjective—especially when defined by one group and them imposed on others.

And the people who have decided what objectivity means, and how much subjective opinion people can express, are “predominantly older, white and male,” Lowery said. “So we see a more diverse group is being held to standards by older white men based on their subjective judgment of where the line should be. The inconsistencies of that only work in one direction.”

Lowery focused specifically on the way in which media have reported on the interactions between law enforcement and Black people.

“For a long time media took official accounts and police accounts as ordained truth. But the rise of cellphones and body cameras means we have to assess assumptions we have about police accounts. Just because the police say George Floyd was resisting it doesn’t make it true. And if we have these videos where we know police were not telling the truth, what does that mean for all the other instances where we don’t have independent evidence if we know that we can’t trust the police

“We still see police jargon in reporting ‘officer involved shooting’ or ‘person of interest’ all the time. But we are seeing a shift.”

The observation opened up a broader discussion about the language media and corporations use when discussing critical issues, and the evolving nature of language. Said Lowery, ““Language evolves: it was a radical decision for black people to call themselves black as opposed to negro. But language evolves. If our job is to reflect reality, our language has to evolve because culture and society evolves.”

Tai Wingfield, senior vice president, diversity, equity and inclusion at Weber Shandwick’s consulting unit United Minds, pointed out that the Black Lives Matter movement has changed the way organizations discuss issues of racial justice. “Systemic racism and related terms were all but absent from media landscape and from workplace and business settings before George Floyd. It was in the hundreds and now it’s in the thousands or the tens of thousands—and that’s in just six months.”

Just as journalism has used “objectivity” as a way of minimizing Black voices, organizations have used notions of “meritocracy” as an excuse for failing to advance diversity.

“What we are hearing is this myth of meritocracy,” Wingfield said. “Meritocracy is a worthy goal but embedding true meritocracy is hard. When organizations are developed by the dominant culture, when we review who’s worthy and who isn’t, who gets access to relationship capital, it’s not based on merit. It can be way of perpetuating systemic biases and sanctioning racist attitudes.”

She suggested that the language organizations are now using could lead to greater progress on issues of racial justice.

“Race has always been considered the third rail in society and in the workplace so we have turned a blind eye to these injustices. Even organizations with a longstanding commitment to diversity are further along on issues related to gender than on issues related to race. We all have women in our lives but we can live and work in settings that keep separate from others.

She suggested that language that makes the dominant culture uncomfortable may be necessary to affect real change. “When we say Black Lives Matter we are talking about equity, not about supremacy. Context matters…. The need to make the dominant culture feel comfortable is one reason diversity and inclusion initiatives are failing. Not calling a thing a thing hampers our ability to tackle the real issues.”

She also said that research from KRC, another Weber Shandwick sister company, suggests that both employees and consumers are paying attention to the way in which organizations handle racial justice issues in the workplace, and are prepared to make decisions—about where to work and where to shop—to benefit companies that make real progress.

“If inclusion is a value, and fair and equitable treatment is a value, and if respect is a value, then sometimes there is a very clear right and wrong. That doesn’t mean the decision won’t come with a cost. In any change, we know there is a percentage of employees who won’t be on board with that change. A short-term cost may be worth it for long terms gains.”

Asked about the role that communicators can play in advancing racial justice, both participants saw the communications profession’s role as critical.

Said Wingfield, ““Communications plays a critical role in defending reputation and people in their organizations. It’s the glue that makes change stick. If we want to re-engineer we listen and learn and we foster trust. Communicators are at the heart of this kind of work.”

And Lowery added: “Obviously, it helps to have people of diverse perspectives who are going to pitch diverse stories. But sometimes just being aware that these dynamics exist is progress.”