Please refer to our Privacy Policy for important information on the use of cookies. By continuing to use this website, you agree to this.
Home Latest PRovokeGlobal: Science, Not Politics, Drives Pfizer On Vaccine 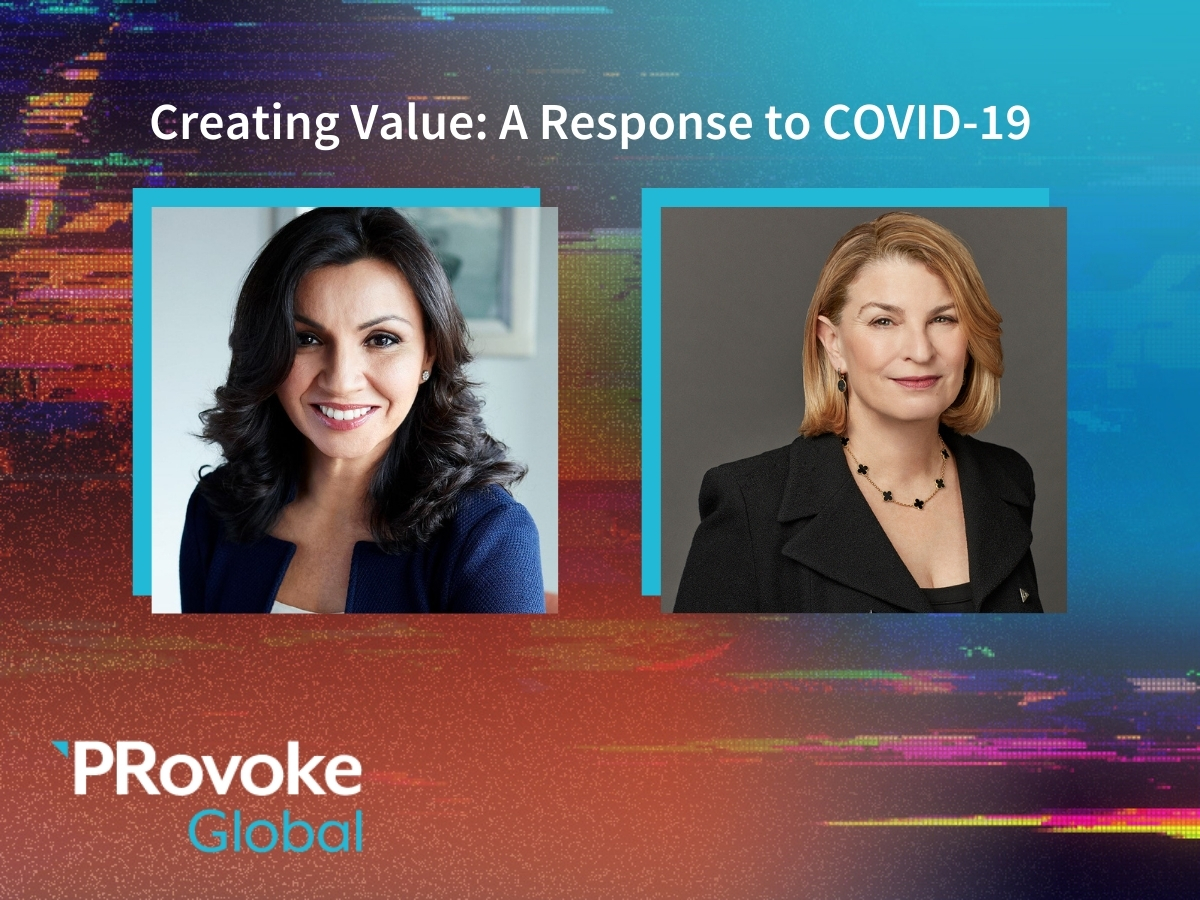 Pfizer’s role in developing a vaccine for Covid-19 has thrust it into the political discourse, but the company’s focus on principles and values has guided its actions.

Pfizer had found itself thrust into the political crossfire as it races to develop a Covid-19 vaccine, but has been guided by its values and its focus on science, chief corporate affairs officer Sally Susman told the audience at PRovokeGlobal this morning.

Susman, an executive vice president at Pfizer, was speaking in conversation with AnnaMaria DeSalva, global chairman and CEO at Hill+Knowlton Strategies, during a session focused on “Creating Value: A Response to COVID-19.”

You can view the full session video here.

Susman began by describing the chronology of the coronavirus and its impact on Pfizer. “In January, it was a scary time when we started getting reports from our colleagues in China about the coronavirus. In February, WHO declared a state of emergency and we began to see it spread around the world. And then in March, we had a full blown crisis here in the US and on March 10 we closed our Pfizer office here in New York.”

At that time, Pfizer CEO Albert Bourla outlined three priorities for the company: “First, he said we needed to take good care of our 90,000 people around the world. Second, we wanted to ensure the steady flow of medicines to the people who need it. And third, we would try to bring a vaccine forward by the fall.”

That involved accelerating a process that typically takes four to 14 years into the space of several months, with development, clinical trials, regulatory approval and manufacturing happening simultaneously. “We’ve already begun production so we are ready to go if we have approval,” said Susman.

In addition to all of those challenges, Pfizer has been instrumental in bringing the biopharma industry together for an unprecedented degree of collaboration during the crisis. Said Susman, “Biophama industry can be a pretty cutthroat industry, but not in this time of crisis. Back in March we produced a five-point plan on collaboration, and what we all agreed was that in this instance the competitor is the virus. It allowed us to reframe the discussion and focus on the mission.”

The industry’s united front on Covid-19 issues became quickly apparent in September when, amid concerns that a vaccine might be rushed out in order to impact the election, nine pharmaceutical companies—led by Pfizer and Johnson& Johnson, pledged that any decisions related to the release of a vaccine would be driven by science, not by politics.

“Because Pfizer was caught up in the politics, our name came up in the debate, we wanted to get out a simple mission that we are moving at the speed of science, not the speed of politics, and that we know we have an obligation to take the good and true path,” said Susman. “Albert Bouria Said that very clearly to our employees, but the message went viral and the message was that would be guided by our principles and our values and not by the politics.”

That had been on Susman’s mind since the beginning of the crisis. “As communicators, our job is not politics; our job is policies,” she said. “We were focusing on policies that are pro-patient and we were standing on principles, not on politics.”

In fact, Susman had recognized three priorities from the beginning of the crisis. “When all this started I knew I needed a basic plan to keep focused during this time. That plan had three elements. First, we needed to back this vaccine to the hilt. There is skepticism about vaccines at the best of times. In this environment we needed to be smart in talking about the attributes, and we needed to be transparent—for example, we posted the protocol for our trial, something we never did before.

“Second, I leaned heavily into documenting this experience.” She said she had worked with crews from media outlets such as HBO, Nat Geo, and Disney, all of them interested in telling the story of the vaccine’s development. “And third, as Pfizer is transforming into a lean, agile, science-based company, I understood that this vaccine will be a proof point for us in that story.”

In fact, Susman believes the Covid-19 response could be a critical inflection point for the reputation of the bioharma sector. She recalled that when she joined Pfizer, after holding senior communications roles at American Express and Estee Lauder, she was surprised to find that a company that had brough penicillin to market and an industry that was focused on improving health and saving lives somehow languished at the bottom of corporate reputation rankings.

“We have a chance with this pandemic to really shift perceptions,” she said. “I have never faced or enjoyed so much interest. Our phone is ringing constantly, we are getting calls from the press, and calls from politicians and world leaders. This can be a paradigm-shifting opportunity for our industry, which means that every move must be done in a way that reflects positively on our industry.”

That’s something that has been top of mind for Susman, but also for CEO Bouria, who hosts daily calls that focus on—among other issues—the trust that will be necessary for a vaccine to be widely accepted.

That also means committing to defending science against the wave of fake news and conspiracy theories that have swirled around the disease and possible vaccines.

“If you are a science communicator you should consider yourself conscripted into this national emergency,” Susman said. “With people politicizing science and promoting misinformation, you can imagine the tragedy if we do develop a vaccine and bring it to market and many people ate too afraid to take it.