Please refer to our Privacy Policy for important information on the use of cookies. By continuing to use this website, you agree to this.
Home Latest PRSummit: Next Generation Of CEOs Will Have Communications Skills Embedded 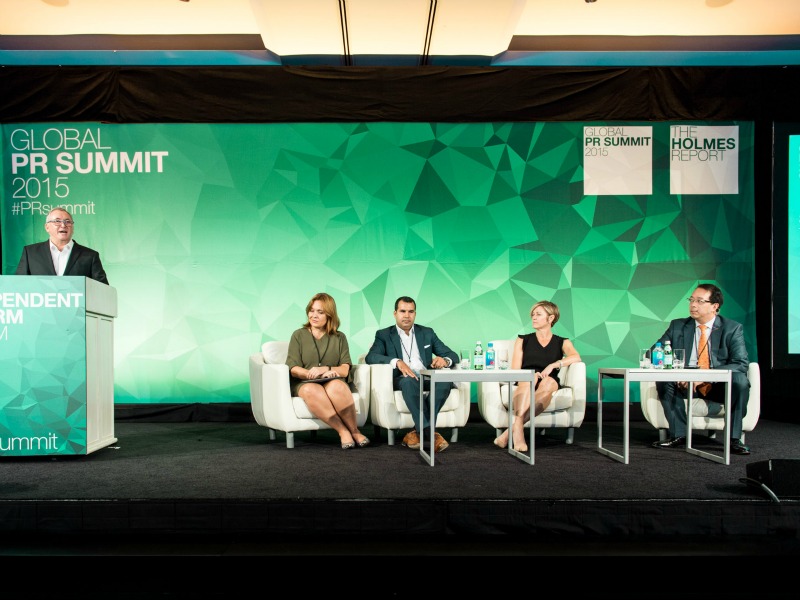 PRSummit: Next Generation Of CEOs Will Have Communications Skills Embedded

How can PR firms persuade CEOs to listen to PR advice? A session at today's Global PR Summit provided some answers.

MIAMI—The challenge of 'Storming the C-suite' differs dramatically from market to market around the world, but all PR firms face the same challenges when it comes to finding top talent and persuading CEOs to listen to PR advice, according to a panel of agency leaders from four continents at the Independent Public Relations Firm Forum in Miami.

Michael Murphy, who heads consulting firm Michael Murphy & Ltd, introduced the session citing research recently published in Forbes magazine about growing focus of the C-suite on reputation, evidence that financial institutions are increasingly focused on the “intangible assets” of the companies they evaluate, and a recent book from Lord Browne focused on the widening chasm between business and society and the collapse of trust in business leaders.

In this environment, he suggested, there is an unprecedented opportunity for PR firms to add value to the C-suite. But obstacles remain, even if they vary from market to market.

“We do a lot of work in highly regulated industries where CEOs can be reluctant to communicate,” says Tanya Meck, of New York-based public affairs firm Global Strategy Group. But pressure is mounting for them to get better at communicating. “We had one CEO in crisis who shut down communication and told people who would focus exclusively on business fundamentals. He was removed from his position by the board. We are going to see more intervention from investors and board members.”

In Asia, meanwhile, about 95 percent of Chinese companies are family-owned and managed business, so the C-suite looks very different there says Richard Tsang of Hong Kong-based Strategic Public Relations Group. Even in Hong Kong, an international financial center, 62 percent of listed companies are still family businesses.
“They are still concerned about whether they are seen as successful stewards of the business. Or they may want recognition, to be seen as contributing to the community.”

Asuncion Soriano of Spanish firm Atrevia, which also works extensively in Latin America, adds: “In Latin America, we also have some family business, and we also have big brands that don’t have a communications department and when there is a critical issue they really need outside counsel.”

Finally, Kamal Taibi of Strateus Group in Morocco provided an Afircna perspective: “Advertising here is still for products and services, not about character or purpose.” But the rise of social media is beginning to change all that, and so CEOs and C-suite executives are investigating what to do. There is a growing realization that even companies that spend heavily on advertising are subject to scrutiny and criticism in the mainstream media, and CEOs are beginning to pay attention.

One challenge all firms face is finding the right talent.

“In Africa,” Tiabi says, “our challenge is to find people who understand the business rationale, and can make their ideas align with the business rationale.”
Adds Soriano. “The most important thing is to speak the language of the C-suite. We have to employ a diverse team with diverse points of view, and the ability to take the pulse of society. We have people from NGOs, for example.”

Tsang’s firm, with a strong focus on investor relations, has found talent in the financial realm, while Meck said GSG has drawn talent from politics. She pointed out that companies as diverse as McDonald’s and Amazon have drawn their communications leadership from the political realm in recent months—and she responded to a question about whether PR firms might sometimes need to circumvent in-house communicators to get access to CEO with a resounding rebuttal.

“It is my experience the circumvention often does not work. One thing CEOs hate is mixed messages. It’s better to aim for more collaboration and a strong partnership with CEOs.”

Murphy also asked whether PR counselors needed to influence firms to hire a “different kind of CEO,” better at communicating, better at listening, with greater empathy for the external environment.

Tsang was skeptical: “We may not be able to influence companies to hire different kinds of CEO, but we can help to build a corporate culture that makes it necessary to hire a different kind of CEO.”

In cases where they still need to be persuaded to value communications: “There’s nothing CEOs like more than data. If you can throw a chart or graph that proves return on investment all the better.”