Please refer to our Privacy Policy for important information on the use of cookies. By continuing to use this website, you agree to this.
Home Latest Regional Expertise And Relationships Key To Launching In Latin America 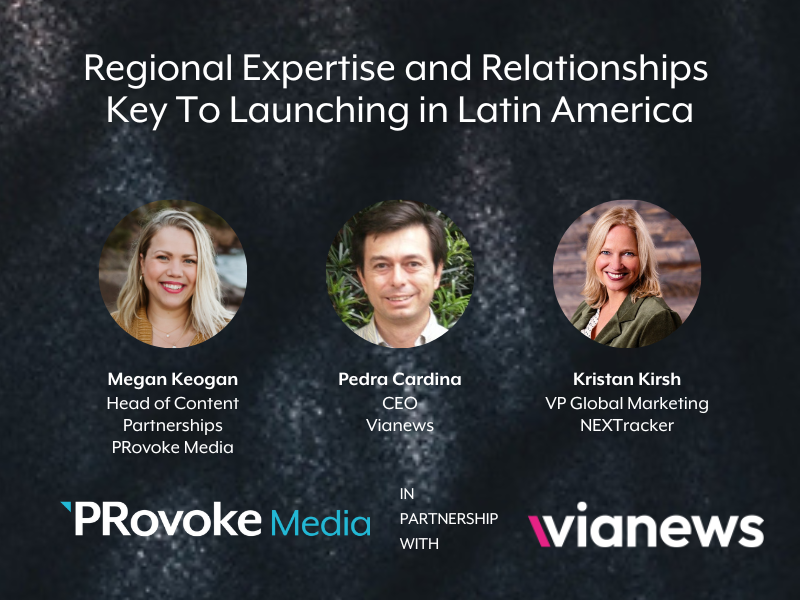 Regional Expertise And Relationships Key To Launching In Latin America

Having a presence in Latin America is top-of-mind for many brands seeking to boost their global presence, and many are looking for the secret sauce to make a splash. Leaders from Vianews and NEXTracker join us this episode to discuss why there’s no one-size-fits all strategy to do it.

The Latin American market is growing fast across many industries, so it’s not surprising that marketing and media professionals are trying to tap it. But “it” is much more diverse and nuanced than meets the eye. Latin America has 21 countries, two principal languages and a plethora of local idiosyncrasies. Communicating in the region means understanding many local cultures and languages that transcend borders.

In this episode of the PRovoke Media podcast, Pedro Cadina, CEO of Vianews, and Kristan Kirsh, vice president of global marketing at NEXTracker, discuss what it takes to be successful in Latin America and why a one-size-fits-all approach simply will not work.

“Localizing your content is not so simple because there are many differences between the Spanish of Argentina and Mexico, for example,” Cadina said. “It’s strange for people that are not from Latin America, but it’s true. We do not advise you to put someone from Peru, for example, in contact with someone in Chile doing media relations. It doesn’t work. And if you are interested in doing business in Peru, depending on the sector you are in, you should consider that 45% of the population is indigenous. And 50% of Peruvians do not speak Spanish. So, think first about what your business goals are and which countries you need to start.”

Cadina knows the market well. Based in São Paulo, Brazil, he has more than 40 years of experience in the Latin American journalism and communications market. Throughout the podcast he mentions several nuances in each country, but he also provides a general overview of best practices, too. For example, relationship building is key across the region.

Kirsh is based in California, but she’s getting to know the region well thanks to solar company Nextracker’s expansion in the area. She understands the appetite for marketers becoming more interested in Latin America, and the overwhelm that comes with it. Her best piece of advice, she said, is to have a plan.

“We can get hung up on the fact that we might not know the market share, but there are so many resources out there,” she said. “And, I always go back to basics — know your own key messages, your brand pillars, find a local agency.”

0:00 Introductions
6:02 High-level Differences In The LatAm Region
9:32 Building And Cultivating Social Ambassadors Within Your Company
13:38 Common Denominator In Latin America: Family
18:00 Let Your Agency Listen To Who You Are, What You Need
19:34 How To Build A Good Team
22:51 Building Credibility Across The Region
27:31 Differences Between U.S. Media And LatAm Media
30:37 Marketing Budget Breakdown 101
34:47 Latin American Culture Is Group, Not Individual, Oriented