Please refer to our Privacy Policy for important information on the use of cookies. By continuing to use this website, you agree to this.
Home Latest Report Accuses PR Firms Of Supporting Climate Change 'Misinformation' 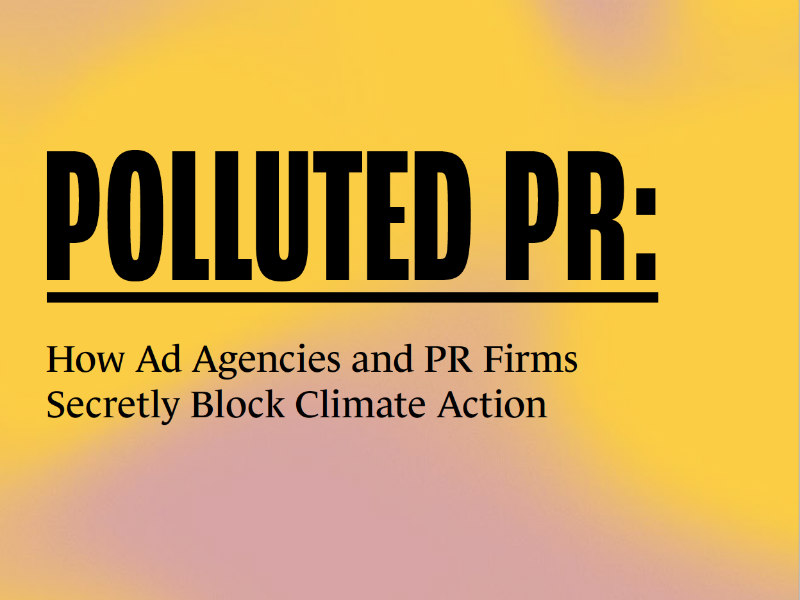 ‘Polluted PR’ study urges agency employees and clients to put pressure on firms that work in the interests of the fossil fuel industry.

In positioning fossil fuel companies as shifting towards a more eco-friendly operating model, PR agencies are helping to present a false picture of climate change and obstructing action to tackle it, a new report alleges.

The study, ‘Polluted PR’, was conducted by Fossil Free Media as part of its Clean Creatives campaign to promote more environmentally-responsible policies among advertising and PR agencies and their clients. It claims that much of the $200 million-odd that oil and gas companies spend on marketing every year goes on activities aimed at public deception. It adds that spending by the sector on communications dwarfs that by clean energy and public interest groups, which ultimately distorts “the public discourse around climate change by drowning out the public”.

The report follows the launch of the the Clean Creatives campaign, which called on PR firms and advertising agencies to cut ties with the fossil fuel industry, and resulted in Porter Novelli cutting ties with the American Public Gas Association.

To be sure, many fossil fuel companies do have divisions that focus on clean energy. But these typically amount to a small fraction of the overall business. To illustrate the point, Fossil Free Media points out that while BP has launched high profile branding campaigns (supported by WPP) depicting its transition to a renewable energy company, oil and gas account for 96% of its activities.

Edelman’s relationship with the fossil fuel sector comes under particular scrutiny, even though PRovoke Media previously revealed that Edelman had ended its relationship with the American Petroleum Institute (API) in 2015. The report claims that Edelman worked with the American Fuel & Petrochemical Manufacturers (AFPM), an organisation that has used “fake front groups and other dirty tactics” to encourage government easing of regulations designed to protect the environment.

PRovoke Media reached out to Edelman but a spokesperson declined to comment directly, instead pointing to a company statement outlining the company’s stance on energy and the environment. In the statement, Edelman says it is “proud of the work we do to support our energy clients as they work to reduce emissions while continuing to provide reliable, affordable, and ever cleaner energy to meet the demands of a growing global population”. It adds that it is committed to helping address climate change “by supporting efforts by all stakeholders to advance the development of sustainable solutions”.

The report details case studies of questionable assignments that PR firms have undertaken on behalf of oil and gas clients. In one example, Porter Novelli helped the American Public Gas Association promote the use of gas in the home at a time when households were transitioning to apparently cleaner electric energy. Another shows FTI Consulting working on behalf of the oil industry to create misleading web assets aimed at politicians and other decision makers.

Fossil Free Media said it anticipates “major growth in PR and advertising campaigns on behalf of fossil fuel companies in the coming year” as they face challenges in the form of a more pro-environmental US administration and stronger EU climate regulations.

In an email, Jamie Henn, a representative of Fossil Free Media, said the organisation plans to send the report to all named agencies and their clients. The report states that everyone in the communications ecosystem has a role to play in combating the “growing harm of fossil fuel misinformation”. It urges agency staff to refuse to take on fossil fuel industry-related work, and clients to put pressure on agencies by asking them about their ties to the industry and threatening to withdraw business if they maintain those ties