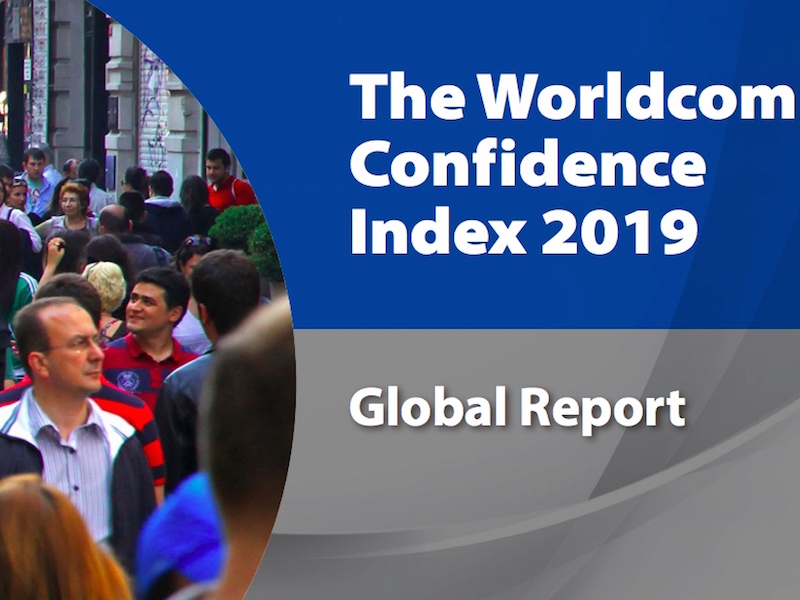 New research from the Worldcom PR network shows that confidence among global CEOs and CMOs has dropped 20% in the past year.

LONDON — Confidence among business leaders and marketing chiefs around the world has dropped sharply over the past year, according to new research from the Worldcom Public Relations Group.

Worldcom – a partnership of independently owned public relations firms with 143 offices employing some 2,000 staff  – analysed online content from more than 58,000 chief executive and chief marketing officers for its annual global Confidence Index. The report looks at CEO and CMO confidence in regard to areas from reaching audiences and retaining talent to global trade agreements and crisis management.

The study found that overall confidence among global CEOs and CMOs is down more than 20% on 2018, with the most significant drops in the US (51%) and China (21%). Japan bucked the trend, moving from last to first in the Confidence Index, with a rise of 74%.

Worldcom chairman Roger Hurni said: “High levels of uncertainty globally, including talk of trade wars between the United States and China, have not helped assuage the fears of business leaders, and our research shows that global trade agreements and tariffs are undermining confidence.

“Since our last Confidence Index in 2018, leaders have also encountered Brexit, protests in Hong Kong, the proliferation of global warming, famine, and the re-emergence of diseases such as measles. This combination of factors may help explain why confidence levels have fallen so dramatically over the past year.”

This year, Worldcom used a new research methodology, working with Advanced Symbolics Inc (ASI), a market research firm that uses artificial intelligence to track and interpret publicly-available social media content. This enabled a much larger sample than in previous years and a more comprehensive global picture.

The research showed that one of the areas leaders are more concerned about this year is their ability to protect their brand in a crisis. The report says: “This is perhaps a reflection of the reaction to the #MeToo movement, which has seen the public, and the media demand that leaders actively denounce those accused of bad behaviour.” Leaders in Portugal are most concerned about crisis management, as are those in Japan, US, China, Germany, India and France are also concerned.

The report also measures the importance of reaching specific audiences and the confidence levels that C-suite executives have in reaching those audiences. In 2018, CEOs were most concerned with reaching customers, but the 2019 report shows that leaders are giving most attention to influencers.

Influencers’ attention share grew 160%, pushing customers into second place and employees into third place. However, CEO confidence in reaching influencers remains quite low. Leaders are more confident in their abilities to reach shareholders, customers, suppliers, and even government officials.

Hurni said: “Influencers were an audience in decline in 2018 but leapt to the front of the pack in this year’s report. The growth of this audience could suggest that leaders feel they need the support of influencers to help them navigate their way through turbulent times.”

The analysis also showed that leaders have low confidence in their abilities to retain talent. Economic migration and upskilling and reskilling employees were other talent-related concerns.