Please refer to our Privacy Policy for important information on the use of cookies. By continuing to use this website, you agree to this.
Home Latest Tech Companies Should Boost Data Transparency, Says Salesforce CEO 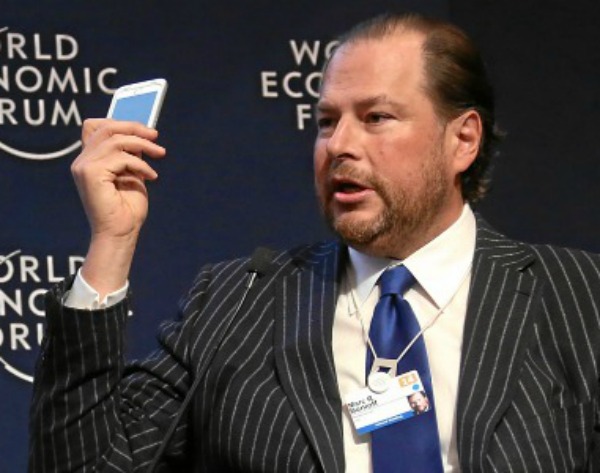 Technology companies should embrace greater transparency if they want to stop being viewed as enemies of privacy, said Salesforce CEO Marc Benioff today at the World Economic Forum in Davos.

Technology companies should embrace greater transparency if they want to stop being viewed as enemies of privacy, said Salesforce CEO Marc Benioff today at the World Economic Forum in Davos.

Benioff made the comments at a Microsoft event which featured new research from Penn Schoen Berland into how people around the world view personal technology. The study, overseen by Microsoft advertising and strategy VP Mark Penn, polled 10,000 people in 10 countries, revealing that most see technology as a positive force for innovation, economic growth and education.

The big negative, as Penn admits, is privacy — in the wake of numerous revelations about snooping and surveillance. 47% said privacy was the aspect of life most negatively impacted by technology, ahead of personal safety/security (23%). In addition, developed countries are less willing trade privacy for enhanced national security. Most developing countries are split on this issue, although in India 80% believe it makes sense to give up some privacy to protect national security.

The findings prompted Benioff to call on consumer technology companies to enable users to know “everything” about how their data is handled. “Do you know where your consumer email is?” asked Benioff. “These systems are set up in a way where you can’t see.”

“Transparency is, fundamentally, the only way we are going to rebuild trust,” added Benioff.

Fellow panelist Maurice Levy, the Publicis Groupe CEO, noted that consumer concerns over privacy had to be taken seriously, particularly in Europe where they are most pronounced. Levy pointed out that European attitudes are often rooted in the experiences that many of the region’s countries have had with totalitarian regimes. “It’s something which is extremely important in those countries and you have to understand those issues.”

SAP CEO Bill McDermott used analytics to illustrate how technology companies can help enable greater transparency. As an example, he cited Turkey, where tech tools have brought a new level of quality and feedback into the education system.

While Levy noted that the ‘American dream has become a Silicon Valley dream’, former US Treasury Secretary Lawrence Summers warned that stronger leadership is required to help ease the “difficult adjustment period” caused by technological change.

Asked as to the kind of policies that would help ease technological disruption, Summers offered an expansive take: “Some combination of harnessing this technology to make public education far more efficacious than it is today. Some means of taxation that achieves a level playing field with less interference and more incentives. Some efficacious and affordable apparatus for providing broader social protection at a no more prohibitive cost than we have today.”