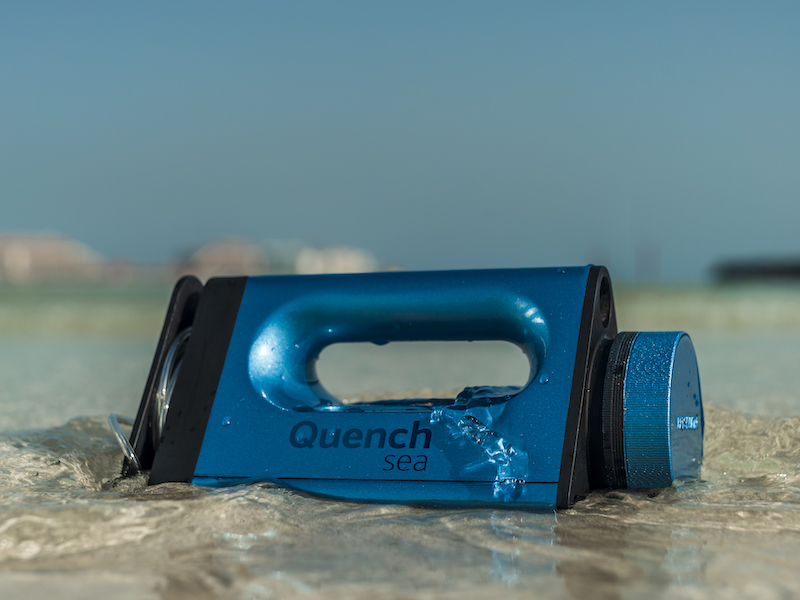 The virtual agency will support the innovative renewables company with product and corporate PR and thought leadership.

The London-based company, which is one of the World Economic Forum’s Top 100 Startups and is backed by American seed accelerator Techstars, aims to provide clean, fresh drinking water and low cost, clean energy across the world, delivered in a sustainable way using its new technologies.

The PRN global team delivered a project in 2020 in the UK, US, France and Germany to promote Hydro Wind Energy’s (HWE) crowdfunding campaign on Indiegogo for its first go-to-market product, QuenchSea (pictured), the world’s first portable, handheld desalination device which turns seawater to freshwater.

Following a further crowdfunding campaign on Seedrs which brought its funding to almost £1 million, PRN has now been appointed to support HWE on an ongoing basis with product and corporate PR and a thought leadership programme.

HWE intends to donate 100 million QuenchSea units by 2027, potentially giving up to one billion people access to clean drinking water. As well as the humanitarian aspect, the $60 product is aimed at the adventurer market, including sailors and campers.

PRN’s in-market teams will handle the Quenchsea product launch and product review programmes to drive awareness and sales. Separately, the agency is developing HWE’s broader corporate narrative and messaging across all its business streams.

The team is also planning thought leadership campaigns for later in the year around other new technologies developed by HWE. These include SubSea RO – large scale offshore desalination plants – and hybrid energy system OceanHydro.

HWE chief executive Lee King said: “We’re a start-up with a mission to get our products out into many markets at the same time and make a difference to people who need fresh water and low-cost energy. The PRN model allows us to run multinational campaigns cost-effectively, working with senior people who know how to reach the right contacts, coordinated by the PRN hub in the UK.”

PRN’s client services director and head of consumer Katy Campbell added: “We were blown away by both the ambitions of Lee and his team and the potential of the HWE products to actually go some way towards solving some of the world’s most pressing humanitarian problems. Our global team is passionate about helping HWE meet its mission of becoming the world’s leading energy company.”