Please refer to our Privacy Policy for important information on the use of cookies. By continuing to use this website, you agree to this.
Home Latest Trust Barometer: Pressure Mounting On CEOs To Act 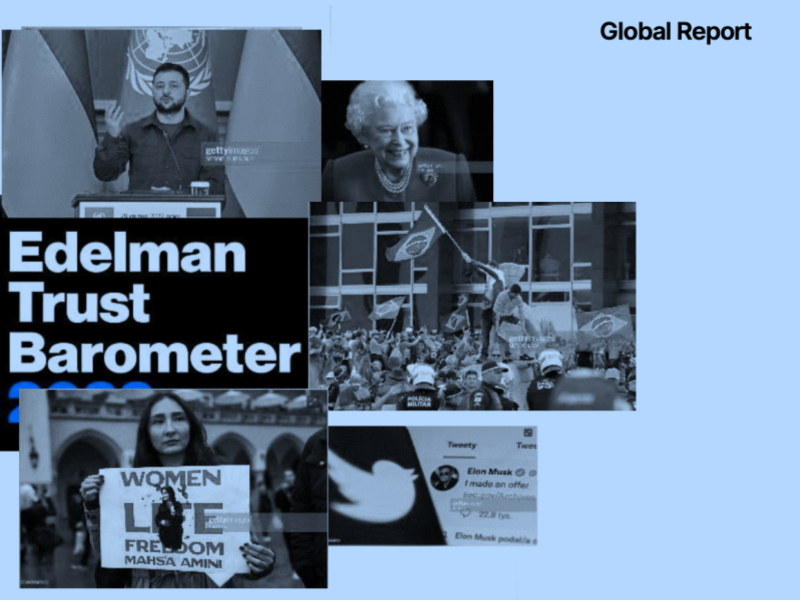 The 2023 Edelman Trust Barometer found that business, as the most trusted institution, is increasingly expected to lead on social issues.

NEW YORK — The 2023 Edelman Trust Barometer finds that with waning trust and rampant polarization, global consumers are increasingly turning to business to take the leading role in combating issues fueling divisiveness, such as economic uncertainty.

“2022 was supposed to have been the year when the world emerged from the pandemic, with a promised return to normal life and an economic boom. Instead, we got an unprecedented Russian invasion of Ukraine, spiraling commodity prices, greater global food insecurity, skyrocketing interest rates, continued climate shocks, punishing Covid lockdowns in China and a retreat from globalization due to geopolitical risks. This triggered a cost-of-living crisis among the lower and even the middle class worldwide,” CEO Richard Edelman wrote in an essay.

“In this year’s Edelman Trust Barometer, we see how these macro pressures manifest at an individual level in a set of fears ranging from inflation to nuclear war. These sit on top of pre-existing worries about job losses to automation and the impact of climate change. The consequence is a descent from distrust to acute polarization in society. Without intervention, we will see a continued move from a crisis of institutional trust to a crisis of interpersonal trust,” he wrote.

With business ranked the most trusted institution for the third consecutive year, there are greater expectations on CEOs to take leadership roles on societal issues, the research found.

The annual survey of more than 32,000 participants in 28 countries found 62% of respondents view business as trustworthy (the only institution that earned that distinction), outranking NGOs (59%), government (51%) and media (50%.)

Business is also the only global institution seen as both competent and ethical, ranking 54 points higher in competence and 30 points on ethics than government, which is viewed as unethical and incompetent. Companies’ treatment of employees during the pandemic and exit from Russia following its invasion of Ukraine, fueled a 20-point jump in business’s ethics rating over the last three years, Edelman said.

In turn, the research found, roughly six times as many consumers want business to be more involved in issues like climate change, economic inequality and workforce reskilling. CEOs are expected to take a public stand and take business action on key issues, with 86% of people expecting business leaders to play a role in strengthening our social fabric.

Edelman, however, cautioned that “business must tread carefully” as 52% of respondents said companies cannot avoid being politicized when it addresses contentious social issues. Respondents said that to avoid being seen as politically motivated business must be a trustworthy source of information (46%), base their actions on science (43%), and not consistently align with one political party (39%).

The study found that economic optimism has fallen from 50% to 40% globally with half of the countries surveyed showing a year-over-year double-digit decline in the belief that their families will be better off in the future.

All of which has widened the class divide. High-income earners' trust in institutions has risen from 50% to 62% over the past decade while low-income earners have struggled, with trust up from 43% to 48%. The most notable national developments in the past three years have been in China (from 4% to 19%) and the U.A.E. (from 10% to 19%), while the U.S. (23-point gap) and Thailand (37-point gap) demonstrate the largest divides.

One quarter of the countries surveyed have experienced a descent from distrust to polarization, including the U.S., Colombia, Argentina, South Africa, Sweden and Spain. Divisions have become so entrenched and society so highly polarized that respondents believe their differences can no longer be overcome.

“We are in a period of huge systemic change in a multi-polar world, with divisive forces fanning economic grievance,” said Dave Samson, US COO and global vice chairman of corporate affairs. “Left untended, the consequence will be further polarization, slowing economic growth, deeper discrimination, and an inherent inability to solve problems. CEOs, and the companies they lead, need to play a central role in addressing these issues and in helping restore economic optimism.”

Ways of doing that, respondents said, include paying fair wages (84%), ensure their home community is safe, strong, and thriving (79%), make sure their organization pays its fair share of taxes (78%), and retrain workers affected by job automation (78%).  CEOs must also defend facts and expose questionable science (72%) and pull advertising money from media platforms that spread misinformation (71%).

Additionally, business must collaborate with government, advocate for truth and be a model of reliable information, respondents said.

It’s also incumbent on business to demonstrate its social impact, prioritize DEI, hold divisive forces accountable and work with rather than against government," Richard Edelman said.

“Trust enables action and action builds trust. The precondition for trust is a system that works for all. That is our perennial task,” he said.