Please refer to our Privacy Policy for important information on the use of cookies. By continuing to use this website, you agree to this.
Home Latest UK PR Firm Attempts To Help Marketers Understand US Media 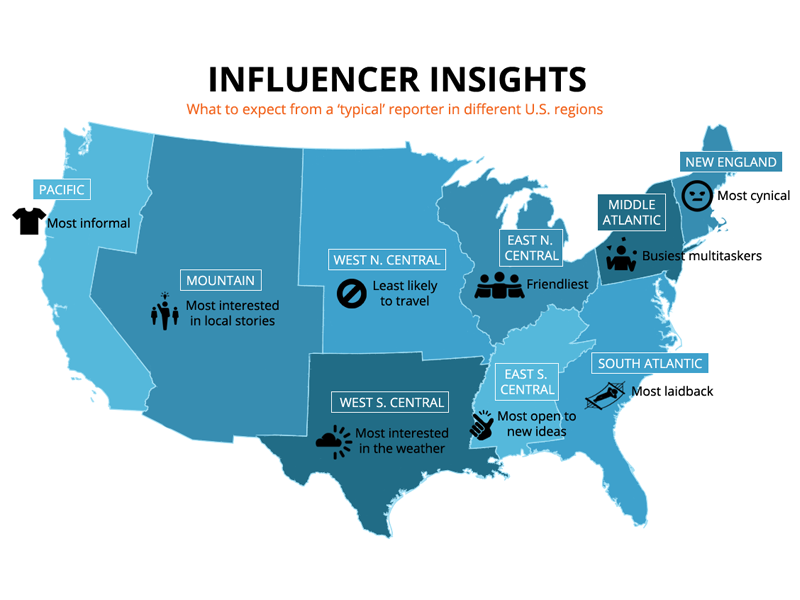 New project ranks the nation’s journalists based on their personality traits and cynicism.

LONDON—How cynical is the US media towards PR pros? A UK PR firm has attempted to answer that question by ranking the nation’s journalists based on their personality traits, in a bid to help foreign marketers better understand media idiosyncrasies across the country.

The 'US Transcreation’ project, which CCgroup is running with nine PR firms from various parts of the country, claims that the media in New England is the most cynical, “bordering on cranky.”

New England is followed by the Pacific region, where media influencers are characterised as being “tough to gain attention” along with “tech-focused and globally aware.”
​

Unsurprisingly, perhaps, the Mid-Atlantic ranks third, with New York stereotypes reinforced by the description of influencers as being “incredibly rushed, frenetic and driven”.

At the other end of the spectrum is the East South Central region, where media is described as being “respectful, professional and curious.”

In particular, Fogg noted that popular depictions of the US as a homogenous media market are “nonsense."

“It’s been a running joke in European PR circles for years: US marketers think of ‘Europe’ as a single, homogenous entity,” said Fogg. "But, if you asked European marketers how PR practice – especially influencer relations - differs between US regions, it would be a short conversation.”

In addition to media personality and cynicism, Fogg found differences in entertainment norms and practices — "only in the Pacific, East South Central and South Atlantic regions is influencer hospitality considered acceptable” — and the approach toward news.

"The US is a diverse communications environment and cannot be approached with a homogenous PR strategy," said Fogg. "Even the level of detail we’ve uncovered in this project risks gross oversimplification, but it demonstrates the value of working with regional specialist PR teams and hitting the road to build relationships with influencers across the US."