Please refer to our Privacy Policy for important information on the use of cookies. By continuing to use this website, you agree to this.
Home Latest UK Team Wins Cannes Young PR Lions Competition 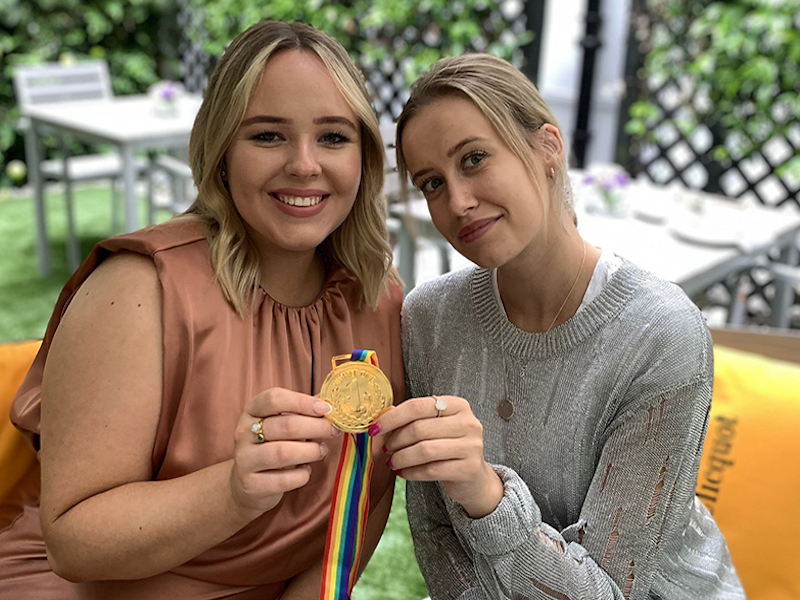 Hope&Glory’s Gigi Rice and Elle Bellwood are the first UK winners of the international competition for young PR creatives.

Rice (pictured, right) and Bellwood (left) won the UK heat as freelancers earlier in the year, beating 60 other teams, after which they were hired by Hope&Glory. At the final, sponsored by the International Communications Consultancy Organisation (ICCO), they competed against 24 national winners; the two-person teams had 24 hours to create a global campaign based on a brief from One Young World, the global forum for future leaders.

The brief challenged competitors to create a campaign that would promote young voices in conversations around climate change. Rice and Bellwood’s winning campaign idea was “Time for Action”: a strategy to target global leaders and politicians with a series of sustainable luxury watches.

Ireland’s team, Orna Clarke and Lughan Deane, won silver, and from Taiwan, Ya Ting Chien and Tze Yu Yeh claimed bronze. The other five teams in the final came from Croatia, Finland, Germany, Indonesia and the US.

Rice and Bellwood will discuss their winning campaign and how to be creative under pressure at Cannes Condensed on Thursday 24 June – the first hybrid event from PRovoke Media and ICCO, being streamed live and free for the global PR industry.

In a statement, Rice and Bellwood said: “We are utterly over the moon to have won the UK’s first gold PR Cannes Young Lion in our initial year in the industry. We’d particularly like to thank Hope&Glory and Candace Kuss for all their support in this round and cannot wait for Cannes Condensed next week where we get to finally meet (and buy a few drinks) for the incredible people in PR who have inspired us through this last year. It’s officially coming home!”

ICCO chief executive Francis Ingham said: “Congratulations to Elle and Gigi on making history as the first ever UK winners of the Young PR Lions competition. It’s been inspiring to see so many brilliant young teams from around the world compete and demonstrate the growing power of public relations.”

Register to access the livestream of Cannes Condensed here.