Please refer to our Privacy Policy for important information on the use of cookies. By continuing to use this website, you agree to this.
Home Latest Ukraine: Brands Must Continue Momentum Through “Courageous Communications” 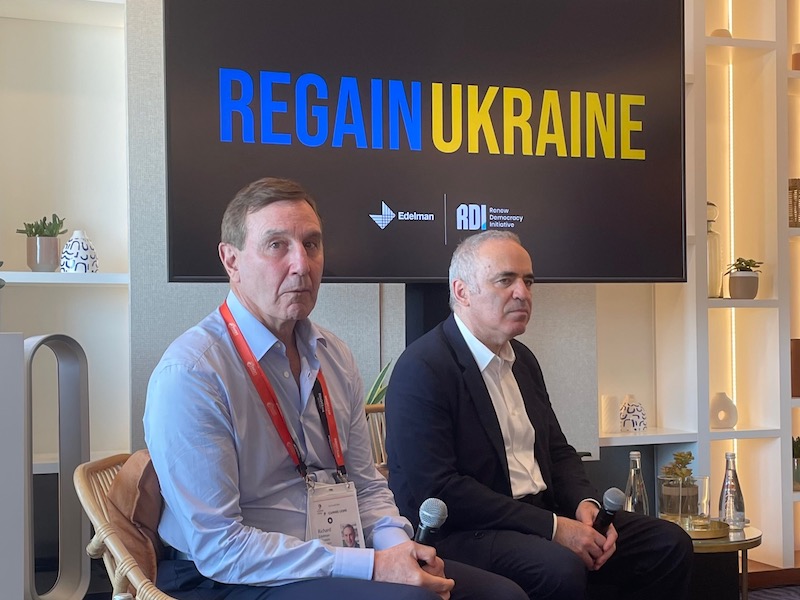 CANNES — Brands still have a crucial role to play in supporting the Ukraine war effort through “courageous communications,” according to Richard Edelman and ‘Regain Ukraine’ campaigner Garry Kasparov, speaking at Cannes Lions International Festival of Creativity.

The duo issued a call to action to brands – many of which responded swiftly to the invasion by pulling out of Russian operations and expressing support for Ukraine – to maintain momentum as the war continues, with chess grandmaster and political activist Kasparov saying: “It’s clear from Russian propaganda that there were high expectations that the free world would lose interest in the war, but it’s important to keep the story alive.

“Brands need to keep communicating the message that this isn’t just about regaining territory and sovereignty, but about the front line of the battle between freedom and tyranny. The global campaign is important – there are three key components of ESG but there is a fourth missing: F for freedom. Without freedom, those components get blurry and are more like brands paying lip service. This is about the triumph of creativity and courage over death and destruction.”

Edelman said the situation in Ukraine continued to be “really significant” for brands and the communications industry: “A Unilever or a L’Oreal could show defiance, courage and conviction by using images of Ukrainians refusing to be subsumed into the greater Russian empire. Brands need to be courageous in their communications, donate to Ukraine and support Ukrainian cultural institutions. They need to think about the role of business, how to maintain attention, and the cost if they don’t.

“We’ve seen an unprecedented reaction from business, with 1,000 companies leaving Russia in three months. When we think about the next phase, it’s time for brands to carry on the message and ensure that people are still emotionally connected – it’s not simply about lobbying government to send more weapons to Ukraine. We’re already seeing Republicans in the US reflecting Russian propaganda and saying ‘we have no business there, why waste our money?’ but we need brands to take responsibility and to say this is our battle.”

On a broader scale, Edelman also referenced his firm’s recent research showing that suggestions that marketing was getting “too woke” were “entirely false – it’s fake news”, as 80% of Gen Z buy a brand based on its values: “It’s just not true that brands do better by putting their heads down and waiting for the storm to pass.”

In terms of how he would like brands to take further action on Ukraine, Edelman said: “ I’d like brands to consider cause-related marketing, from cleaning up Ukraine landmarks to putting money towards production centres in Kyiv, and I’d like the industry to come up with more ideas for helping Ukraine to regain mental health, dignity and its position in the community of nations.

“Brands are now twice as trusted as governments to fix societal ills, and are expected to step into the void in areas that were unimaginable five years ago. That’s the big challenge for brands – to make sure they are acting and solving society’s problems, because that’s what’s required in this moment. If we are going to have effective society, brands need to play a key role in it.”