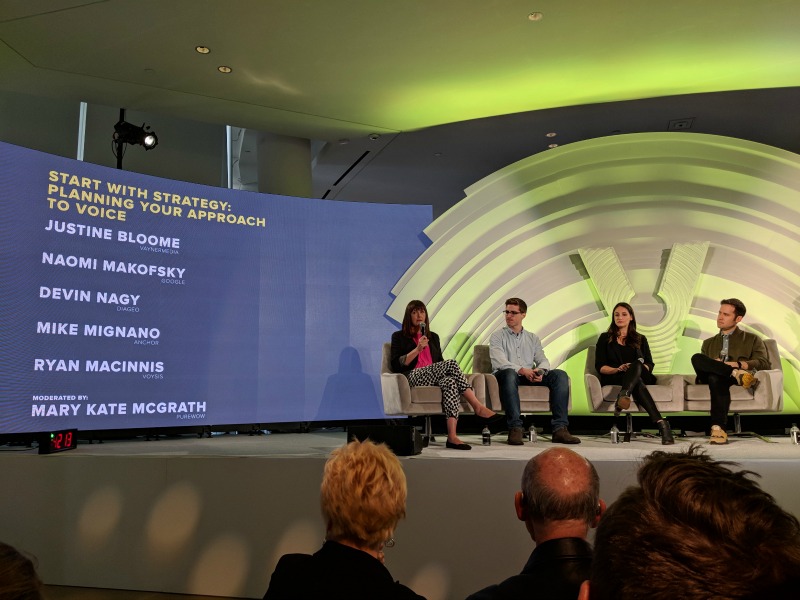 At VaynerMedia's day-long event, marketers encouraged brands to leverage voice and digital audio as part of their larger communications strategy.

NEW YORK — With the use of digital voice and audio tech on the rise, brands should be actively staking their claims in the space, communicating their identities like they do through other channels, said industry leaders last week.

“You have a brand identity. Think about how to create it for an audio-first world,” said Claire Mitchell, who is director of VaynerSmart — the digital agency that is part of VaynerMedia.

“Sonic branding will play a role in differentiating you. Sound design is the new packaging,” she said.

Mitchell’s comments were part of a day-long discussion in New York last week dedicated to the state of voice and digital audio, the marketing opportunities associated with the technology and how brands can best leverage the technology.  The event, called VoiceCon, was led by VaynerMedia.

According  VaynerMedia, 69m people in the US this year are expected to use voice-enabled digital assistants at least monthly and 42m Americans listen to podcasts weekly — making it imperative that brands get into the space before getting crowded out.

Still, as Mitchell said, companies must do so in ways that are befitting their brand identity — maintaining the authenticity conveyed through other communications.

“You first have to think about what space your brand has the credibility to occupy, what value you bring,” she said. Providing utility, entertainment and instruction are some of the options for companies. But “not every application is appropriate” for all, she said.

Panelists, however, also touted the value of experimentation as brands try to find their footing while voice and digital offerings, and the way they are consumed, are in the throes of continual change.

For Devin Nagy, Diageo’s director of technology and emerging platforms, that started with having a deep appreciation of the brand’s global culture and company’s role in it — which, in this case, involves “helping people do basic stuff, make great cocktails.”

“We understand where we fit in and where we don’t fit in,” he said. “And we think we have the right to own happy hour.”

Nagy said Diageo, which owns Johnny Walker, also had the goal of recruiting new scotch drinkers, and wanted to do so in engaging ways. All of which led to the “guided tasting” the company launched on Amazon and Google’s voice assistants to educate consumers about the differences among its scotch whiskies.

When it comes to voice, however, it also is important that brands come through as having personality — and one that consumers like, said Naomi Makofsky, who leads global product partnerships for Google Assistant.

In turn, brands have to be very careful in crafting their offering, as even using the word “thanks” instead of saying “thank you” to listeners could turn people off, she said. Additionally, keep it short; 20-30 seconds is an ideal length, she said.

Panelists also stressed the importance of using voices that speak to diverse audiences, and include references or triggers that reap positive reactions.

“The voice, whether it’s literal or the overall feel, is super important because you want to have something that people feel comfortable spending time with,” said Phillip Hunter, VP of product of Pulse Labs, which produces tools that allow voice developers to test their apps.