Please refer to our Privacy Policy for important information on the use of cookies. By continuing to use this website, you agree to this.
Home Latest Wendy's, Ketchum Take Home 'Best in Show' For 'Keeping Fortnite Fresh' 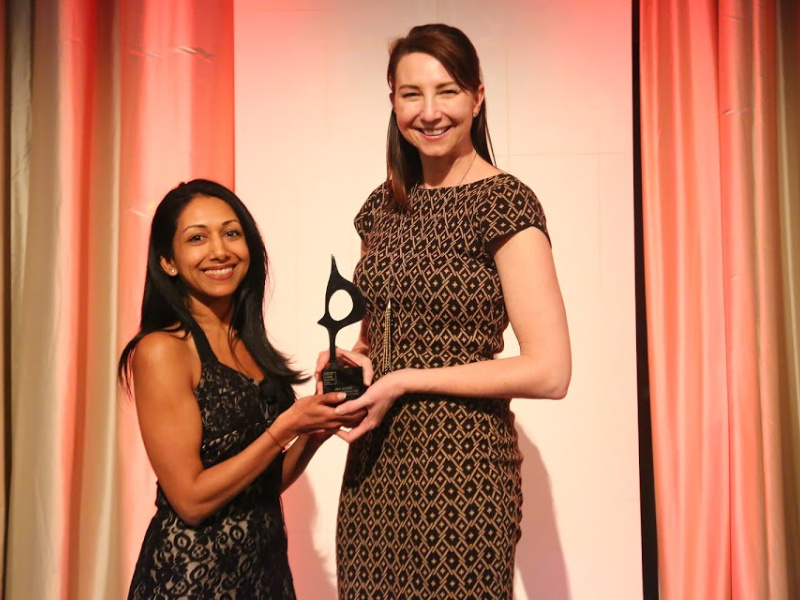 The campaign, which also involved VMLY&R and Spark Foundry, took home top honors last night at the In2 SABRE Awards held at the Langham Hotel in Chicago.

CHICAGO—  Ketchum took home top honors at the In2 SABRE Awards last night for its work with Wendy's on a bold takeover of the massively popular video game Fortnite.

In2 SABRE judges praised for its ingenuity in entering the game to target meat freezers, driving home Wendy's message that its meat is never frozen. Wendy's worked with Ketchum, VMLY&R and Spark Foundry on the campaign that was praised as a "bold takeover of Fortnite going after frozen meat that went totally viral with the players." In addition to the Platinum Best in Show trophy, the campaign garnered a win in the gamification category and social networks categories.

Ketchum took home seven  trophies for the night. Other big winners included followed by ICF Next winning five times, Day One and Weber Shandwick taking home three trophies. The full list is below, with comments from judges on why these campaigns broke through.

"Bold takeover of Fortnite by going after frozen meat — and that went totally viral with the players."

The Shape of History — Hulu with Courageous Studios/UM

"Ignited a social conversation that had lost momentum — while prompting action and an increase in viewership."

"Topped off an event with business action, giving transgender customers a product they needed."

Broadway the Rainbow  — Skittle with ICF Next

"They topped their unconventional approach to Super Bowl in 2018 with a Broadway show in 2019. Totally fits the brand."

"If you can increase 10% shelf space - that's like a whole country at a grocery store."

"Topped off an event with business action, giving transgender customers a product they needed."

"The first restaurant to get it own custom emoji in Venmo — and what a pay-off: drove 1m reward sign-ups!"

"Results truly overdelivered with a sales lift that surpassed the forecast."

"Transformed Zoox into a dominant and respected player in the autonomous vehicle sector."

"If you can increase 10% shelf space - that's like a whole country at a grocery store."

WSJ really IS the Future of Everything, when it comes to AI and Ethics — Affectiva with March Communications

"Spot on placement at the Future of Everything — and excellent use of the media that followed."

"Took a big business risk to build a relationship with Gen Z — and it seems to have worked."

"Bringing people into a replica of the hospital to drive donations was moving and effective."

Mahomes 57 — Heinz with ICF Next

"An out-of-pocket cost of $0 yielded 333x the engagement of the brand's baseline tweet."

UL Close Before You Doze — UL with Allison + Partners

"Smart and relatable for 21+ market just graduating from college."

"Chipotle clearly knows its audience and the channels they are on — and how to get them to act."

#SponCon Vows — Hotels.com with ICF Next

"Created a cultural moment of its own — amazing that five couples actually incorporatedHotels.com into their wedding vows."

"This should be what all government entities are doing."

Best Use of Integrated Social Media

"Breakthrough creativity that taps into a familiar issue with a new twist, giving OpenTable its best Mother's Day bookings."

Best Use of Social Networks

"Bold takeover of Fortnite by going after frozen meat — and that went totally viral with the players."

Best Use of Video Networks

ASMR for DIYers — Behr with ICF Next

"The video was soothing — accomplished what they set out to do."

Best Use of Photo Networks

"They used social media, almost against itself with amazing results."

Chipotle’s Summer of TikTok — Chipotle with Day One Agency

"Reached Gen Z by integrating an organic experience into TikTok."

"The speed was remarkable — and brave, as there was backlash. But it all ultimately paid off."

Mahomes 57 — Heinz with ICF Next

"The Mahomes-ketchup jokes turned into a viral gag."

Best Use of Gamification/User-Generated Contests

"Tens of thousands of gamers continued the mission and shared their own freezer destruction as user content."

Broadway the Rainbow  — Skittle with ICF Next

"They topped their unconventional approach to Super Bowl in 2018 with a Broadway show in 2019. Totally fits the brand."

"Why can't more government entities speak in such a human way? They understood the issue and used smart communication to deal with it."

"Showcases their competitive advantage with their emphasis on historical analysis."

Best Use of Illustrations + Photography

Ask About the Curve — Endo Pharmaceuticals with Ogilvy

"What powerful images — the picture told the whole story."

"They localized to markets to find three children — that's hard to top."

Doritos Another Level — Frito-Lay with Ketchum

"Resonated with Gen Z — as well as the business press. That's an impressive balance!"

"Totally on brand, shining the light on an issue that lacks awareness."

"Creative idea to use anime to reach younger consumers around a commodity like gas."

Best Use of Original/Commissioned Research for PR

"It changed behavior through education. And they included the kids in their planning."

Edelman Intelligence for Hologic: Getting Tested Gets Put to the Test — Hologic

"Clients credit the platform for providing data-driven answers around the actual business impact and ROI of a recent consumer campaign."

"Especially impressive that its client testimonials say 'no else pulls in that much data.'"

Ketchum: A Pivot Toward the Future — Ketchum

"For a large agency to eliminate geographic P&Ls is a massive undertaking — and it seems to be paying off."

"Touched a relevant topic with actionable insights for brands."

We're not in Kansas Anymore — Bospar

"Everyone works from home, this eliminates typical office distractions — so people can provide clients laser-like focus."

"Adobe used its own platform as a stunning new business tool."

"They nailed it within a very short window — and to get it on late-night TV is perfect for this audience."

Data Rules Everything Around Me (D.R.E.A.M): How Zelle® used Data to Make “Everyday Better” — Early Warning with Huge

"Remarkable targeting that worked in getting people on public transit."

The Shape of History — Hulu with Courageous Studios/UM

"Ignited a social conversation that had lost momentum — while prompting action and an increase in viewership."

How to create an October Surprise — Unisys with Bospar

"Creative solution to a common challenge. Accomplished  an impressive feat for the media and the client."

"Bold campaign that dovetails with the wellness movement, resulting in phenomonal sales of vibrators!"

"Multi-phase campaign that puts kids' emotions at the center."

"Engine for thought-provoking and stand-out 360-degree campaigns that take viewers from the screen to the real world – and back again."

Innovator of the Year — Agency

"Has truly disrupted the status quo across healthcare, data, and technology."