Please refer to our Privacy Policy for important information on the use of cookies. By continuing to use this website, you agree to this.
Home Latest WPP Withdraws Support For Charity Fundraiser After Undercover Report 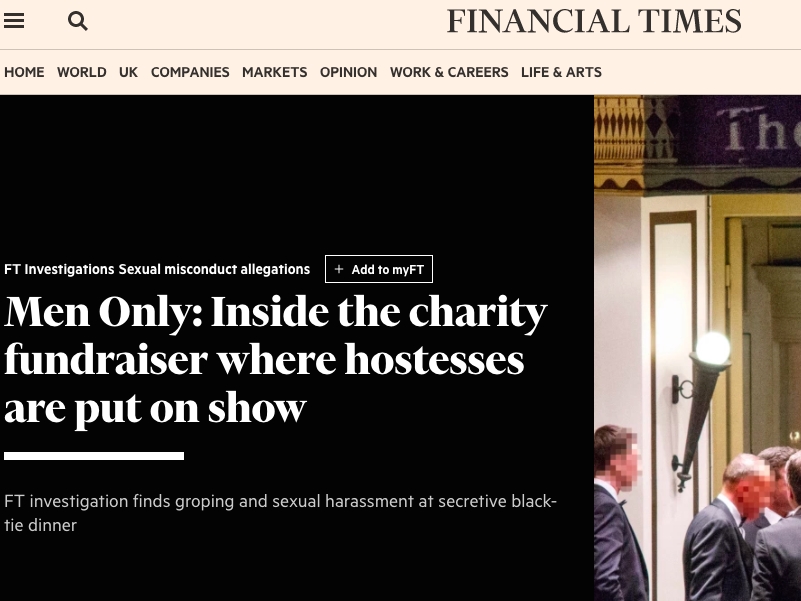 Marketing group says it will no longer sponsor a table at the Presidents Club Charity Dinner after FT investigation reveals sexual harassment at the event.

LONDON – WPP has said it will no longer be involved with the annual Presidents Club Charity Dinner in London after an undercover investigation by the Financial Times revealed sexual harassment of hostesses at the men-only black tie event.

The 33-year-old gala raises money for charities including Great Ormond Street Hospital, the world-renowned children’s hospital in London. This year’s fundraiser was attended by 360 figures from British business, politics and finance, and WPP sponsored a table as it has in previous years.

WPP chief executive Sir Martin Sorrell was not at the dinner this year as he was attending the World Economic Forum in Davos. WPP’s chief operating officer for Europe, Andrew Scott, hosted the table in his absence.

When two FT journalists went undercover as hostesses they were asked to sign non-disclosure agreements. Their report states: “Entertainment included 130 specially hired hostesses. All of the women were told to wear skimpy black outfits with matching underwear and high heels. At an after-party many hostesses — some of them students earning extra cash — were groped, sexually harassed and propositioned.”

Auction lots included an evening at a strip club, and plastic surgery to “Add spice to your wife”.

In a statement, the company, whose PR agencies include Burson-Marsteller, Hill + Knowlton, Ogilvy and Cohn & Wolfe, said: “WPP has traditionally sponsored a table at the Presidents Club dinner to support its fundraising for children’s charities. Neither the company nor our attendees were aware of the alleged incidents until informed of them by the Financial Times.

“WPP takes these reports very seriously and, while we will continue to support relevant charities, in light of the allegations we are ending our association with the event.”

The evening was hosted by children’s author and actor David Walliams. A seating plan of those due to attend the event included Dragon’s Den’s Peter Jones, Arcadia Group’s Phillip Green and Ocado boss Tim Steiner.

Sorrell told BBC Radio 4's The Today Programme this morning that it was "regrettable" that WPP's support of the event had to end "because it is a charity that supports numerous children’s charities and has done a lot of good work".