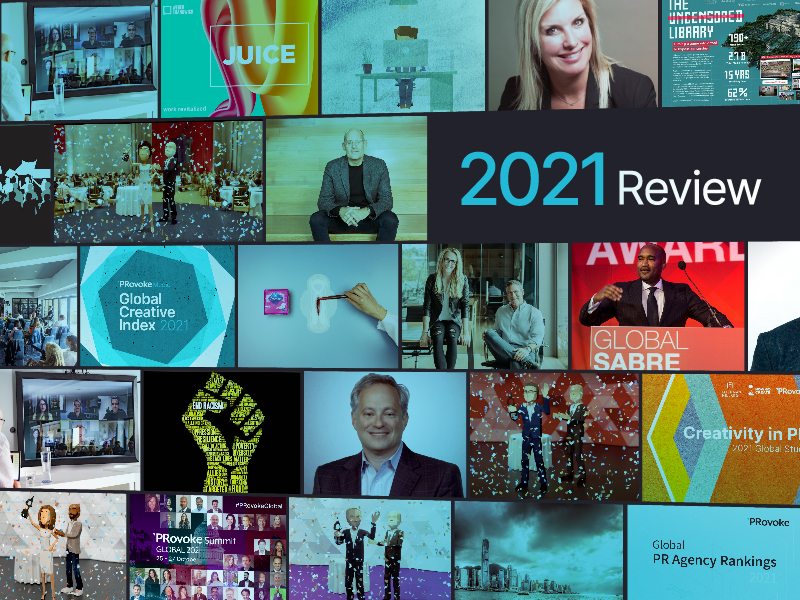 We conclude our 2021 Review with our 12 most-read news stories of the year. As ever, we've excluded awards and ranking stories as they skew results.

So what grabbed your attention during another year in which we grappled with the prolonged uncertainty caused by the Covid-19 pandemic? Well, regular readers will be the aware of the gravitational pull exerted by one PR firm in particular but, beyond that, there were plenty of senior moves and intrigue to keep us occupied, perhaps even distracted amid the pandemic-fuelled angst of 2021.

1. Exclusive: Consulum's 'Relaunch Hong Kong' Assignment Ends Before Launch
Hong Kong's quest to find a PR firm became our most popular series of stories during 2019 and 2020, attracting eyeballs and mainstream media coverage thanks to the unique combination of political unrest and PR intrigue. Less than 12 months after bringing in low-profile outfit Consulum, the contract was over, with nothing to show for it — sparking several uncomfortable questions about whether it was money well spent. The much-touted Relaunch Hong Kong campaign may roll out later this year, or it may not. At this point, given Hong Kong's sudden transformation into the world's most isolated major city, would it make any difference?

2. S4 Capital Adds Former Edelman Duo's Low Earth Orbit Consultancy
Sir Martin Sorrell's S4 Capital has grown rapidly since he launched it in 2018, often through acquisition. But when it came to expanding into the PR sector, S4 firm Media Monks opted for a high-profile 'acqui-hire'  bringing in former Edelman veterans Jessica Clifton and Kevin King, who had led their Low Earth Orbit consultancy since 2019. It was a move that was both bold and relatively low-risk, the kind of combination that has served S4 well on its journey to date.

3. Chris Foster Named CEO Of Omnicom Public Relations Group
It may have taken 18 months, but Omnicom finally filled the biggest P&L role in the PR agency world when it brought in BCW's Chris Foster as CEO of its public relations group. At a stroke, Foster also became the highest-ranking Black professional in the sector, a welcome development in an industry that has not always taken diversity and inclusion seriously. But Foster's new job brings "tough expectations", particularly if he hopes to drive a genuine reappraisal of the holding group's PR agency strategy. His progress will be keenly observed.

4. Tata Consultancy Services Selects Ogilvy After Global PR Review
The pandemic era has been accompanied by a slowdown in big-budget, global account reviews, comfortably making Tata Consultancy Services' pitch one of the largest in the year. And in winning the business, dislodging long-term incumbent FleishmanHillard, new Ogilvy PR CEO Julianna Richter served notice of her ambitions to reinvent one of the industry's most storied PR agencies.

5. Great Resignation Takes Toll On PR Industry
In 2021, it was hard to escape the spectre of the 'Great Resignation', as people rethought their career choices amid two years of pandemic-fuelled uncertainty. And while business indicators remained largely positive, the PR industry also struggled to recruit talent and grappled with salary inflation, all while trying to figure out how to implement hybrid working policies and vaccine mandates. All of which added up to a string of stories that explored these issues in detail, and reinforced the notion that workplace culture is more important than ever.

6. Michael Frohlich Departs Ogilvy To Become Weber Shandwick EMEA CEO
After almost a decade in which he reinvigorated Ogilvy PR's EMEA presence, Michael Frohlich's departure for Weber Shandwick probably came as a surprise, even if you accounted for the accelerated pace of change at Ogilvy in recent years. He took on a key Weber Shandwick position, one that had effectively been empty for 12 months, and is again tasked with "making change happen", in the words of CEO Gail Heimann. For better or worse, it seems unlikely that Frohlich will shirk that particular challenge.

7. Edelman Reports 5.7% Revenue Decline In 2020
The presence of the world's biggest PR firm on this list is often taken for granted, given the outsize influence that Edelman-related stories sometimes appear to wield. But Edelman's 2020 revenue performance offers much more than a footnote, reflecting both the industry's resilience and presaging a broader recovery in 2021.

8. White Men In PR Still Paid More, Promoted More Readily
The Black Lives Matter movement has served to focus minds in an industry that has struggled to make credible progress on diversity and inclusion issues. But PRovoke Media research revealed that the scale of the challenge remains significant, starting with this investigation into the gender and racial pay gap in the US. The findings made for dispiriting reading, and were followed by similar results in Asia-Pacific and EMEA, all drawn from our extensive Best Agencies to Work For research of thousands of PR firm employees.

9. Weber Shandwick Unveils Permanent Hybrid Model For Global Workforce
The future of work occupied many minds this year, as PR firms tried to figure out how to return to the office. So it was unsurprising that news of Weber Shandwick's hybrid working model proved so popular, as agencies across the globe attempted to glean lessons from the world's second-biggest PR firm. And while all of these efforts will, no doubt, reshape what going to work means post-pandemic, they remain complicated by a scenario in which returning to the office — in many markets — continues to be a source of considerable debate.

10. Tim Sutton Takes On Senior Advisory Role For Richard Edelman At DJE Holdings
The world's two biggest PR firms combined to irresistible effect when Weber Shandwick veteran Tim Sutton took on a senior advisory role for Richard Edelman. Sutton had departed Weber Shandwick 12 months earlier, but senior moves from one of these firms to the other remain rarer than you might think. And in focusing specifically on Edelman Asia and Zeno's international operations, Sutton's growth mandate is about as weighty as they come.

11. IBM Rethinks Comms Approach With Campaign-Focused Overhaul
IBM's communications function is no stranger to change, having undergone considerable turnover in the years following Jon Iwata's retirement from the company. 18 months after succeeding Ray Day as CCO, it was Jonathan Adashek's turn to imprint his mark on proceedings, by dividing the team into groups focused on different parts of the tech giant’s business. "This is about being more focused, more streamlined and more coordinated, and having a better impact on business," said Adashek. Other in-house departments are likely to be watching closely.

12. Edelman Affirms Commitment To Sustainability Amid Mounting Pressure
The Clean Creatives campaign to dissuade PR firms from working with fossil fuel companies stepped up a gear in 2021, when Edelman found itself scrambling under pressure from high-profile influencers to drop ExxonMobil. It was a story that took Edelman into the pages of the mainstream media, and underlined how expectations of agencies are changing, often at the behest of their own staff. It seems unlikely that Edelman will be the only firm to face scrutiny for its fossil fuel ties, raising real questions about whether PR firms can be a productive part of climate change solutions, rather than providing cover for policies that undermine action.