Please refer to our Privacy Policy for important information on the use of cookies. By continuing to use this website, you agree to this.
Home Longreads 5 Things We Learned At The 2015 Global PR Summit 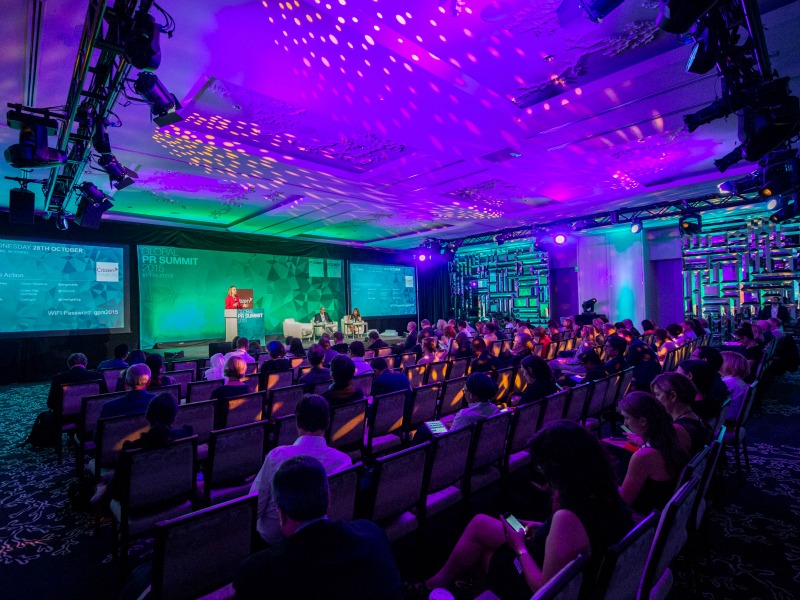 5 Things We Learned At The 2015 Global PR Summit

Near-wins, a broken crisis model, promotion problems, popular movements and PR's enduring virtues rose to the top of the agenda after another engrossing #PRSummit.

It was another year to remember at the Global PR Summit, with the 2015 edition marking the fourth time that the Holmes Report has convened leaders from the worlds of marketing, communications, agency and academia at the St Regis Bal Harbour in Miami.

As always, there was plenty of food for thought, covering a diverse range of areas, and often veering well beyond the boundaries of whatever passes for conventional marketing and public relations discussion these days. You can view all of our coverage here, or take a look at the various social media conversations inspired by #PRSummit here.

To make things a little easier, though, I've picked out five themes that resonated most over the event's three days.

Harvard professor Sarah Lewis kicked off the Summit by making the case for failure, exploring the notion that the 'near-win' is a critical element in the creative process, which can serve to spur people towards true mastery of their field. Lewis, who has written a book on the topic, used numerous examples to make her case, including explorers, entrepreneurs, artists, athletes. In a corporate context, this means becoming more comfortable about failure and encouraging a culture of "deliberate amateurism".

It also means embracing private working rather than group brainstorming sessions, because people fear going against the consensus. “Privacy is a timeless feature of the creative process, she said. "But we need to summon the bravery to stand up for an unusual iconoclastic idea."

Indeed, the importance of culture when it comes to innovation was a recurring theme, particularly in one session that featured communications leaders from Salesforce, Cadillac and Levi Strauss and another, focusing on "inauthenticity", that included contributions from Clorox and Chobani.

2. Crisis management is broken. There are no quick fixes.

From creativity to crisis management, via a heavyweight panel that featured communications leaders from HSBC, GM, Danish Crown and Qsoft. And it was HSBC's Pierre Goad that caught the eye, when he candidly admitted to the bank's failings in managing the damaging revelations about its Swiss operation earlier this year. "We don't know how to manage a crisis in this new environment," said Goad, adding that his nine-year-old son probably had a better grasp of social media than a big bank. "We’re stuck there trying to catch up," Goad recalled.  "We did all the traditional things - it still didn’t quite work. We got absolutely beaten up for nine weeks and the aftershocks continue. I think it’s really hard for corporates to use social media proactively, outside of consumer brands."

Goad's comments should be not be ignored, as the HSBC communications chief knows more about crisis situations than most. They reveal how traditional crisis management techniques lag way behind contemporary consumer behaviour, and how difficult it is going to be for corporates to win trust in such a sceptical environment.

That lesson was brought home in similarly stark terms by a star-studded cybersecurity panel — expertly moderated by the New York Times' David Sanger — which revealed how a range of new cyber threats are forcing corporates to assume they will be breached, and causing them to completely rethink their crisis communication approach. As the Department of Homeland Security's Andy Ozment pointed out: "You have to be prepared for the fact that you might be forced to communicate before you have the facts, before you know whether 300 people are affected or 300,000."

3. Brands remain challenged by gender, while the PR industry has a 'promotion problem'

LeanIn.Org's Kelly Parisi got Day Two off to another entertaining start, but her presentation should have left plenty in the room worried, focusing as it did on the gender disparity that continues to plague the upper reaches of the business world. LeanIn.Org's work in this regard, of course, is groundbreaking, particularly when it comes to the messages that brands continue to reinforce about false gender differences. That was further highlighted by another session with Shanon Kelley, publisher of Vice's women's channel Broadly, who pointed to a disconnect between marketing and women's interests.

And while PR is one of the few industries dominated by women, our research has demonstrated that the top of our industry remains dominated by men, prompting Parisi to note that “PR doesn’t have a pipeline problem — engineering does. Instead, said Parisi, “PR has a promotion issue,” calling for a much greater, more visible commitment to work/life balance policies. "You can in fact make real change."

4. "Ride the movement" — what brands can learn from today's presidential candidates

Clorox's Mary O'Connell noted that today's brands need to be "more authentic than presidential candidates", because of the relentless scrutiny they face. Luckily, this year's Summit had two current presidential campaign advisors on hand in the shape of Hillary Clinton aides Karen Finney and Teddy Goff, who explored how their candidate is trying to debunk the popular narrative about her ascendancy. In that regard, they were helped by an unconventional piece of content — Clinton's 11-hour Benghazi hearing, which they believe helped US audiences gain a much better insight into the "real" Hillary Clinton.

Not every brand, of course, has the benefit of that kind of airtime, even if many probably wouldn't welcome the scrutiny. But, in a fascinating session that focused on Walmart's approach to building its reputation, the retail giant's communications chief Dan Bartlett touched upon the reason why another aspiring presidential contender is doing so well. "He's not creating a movement, he's riding one," said Bartlett of Donald Trump.

That might be a throwaway comment, even accounting for Bartlett's former presence as one of President George W Bush's top aides. But Bartlett's own overview of Walmart's reputation strategy owes much to its newfound willingness to 'ride movements' and ensure that, even if it is not first, it cannot be last on popular issues. Thus, Walmart was one of the first companies to abandon sales of the Confederate flag and themed merchandise when its symbolism became a flashpoint. And more notably, it was one of a handful of companies this year to raise employee pay significantly above minimum wage levels.

5. The PR discipline has won. The PR industry will not until it gets closer to "clients at the top"

PRSummit 2015 delegates will likely reserve a special place in their hearts for advertising legend Chuck Porter, who took the stage on Tuesday afternoon to declare that the "war is over" and "PR won." It is the kind of sentiment that plays well with an industry that can sometimes be too self-critical, and was effortlessly showcased by some inspiring work from Crispin Porter + Bogusky — all of which flowed from Porter's insistent desire that his agency "make news" rather than just ads.

While few can doubt the power of public relations, the more uncomfortable question is whether PR firms are correspondingly successful, or whether it is ad agencies like Crispin and others who are co-opting public relations techniques and retaining their status as a client's key brand building partner. On this, Porter was more circumspect, but he did have some advice which every PR firm should pay particular attention to: "One key for us is we have gotten closer and closer to our clients at the top. It’s difficult to sell risky ideas unless you have the relationships at the top. To do that we spend a lot of time discovering a business problem we can solve and then solving those problems."