Please refer to our Privacy Policy for important information on the use of cookies. By continuing to use this website, you agree to this.
Home Longreads Creativity In PR 2016: Winning The War For Ideas?

Creativity In PR 2016: Winning The War For Ideas?

The fifth edition of the Creativity In PR study explores whether the industry has what it takes to win the war for ideas, amid a continuing climate of risk aversion.

The fifth edition of the Creativity in PR study reveals that the PR industry is more likely than ever to develop the big ideas around which movements and campaigns are formed, despite client concerns over whether PR firms can be entrusted to lead creative amid a continuing climate of risk aversion.

The 2016 Report, co-authored by the Holmes Report and Now Go Create, in partnership with H+K Strategies, is again based on a survey of agency and in-house executives from across the world, this year bolstered by a qualitative Q&A with several senior in-house communications leaders at major companies.

While previous findings have demonstrated the central role that creativity now plays in PR industry culture, this year's Report zeroes in on whether PR people have what it takes to win the war for ideas, in an integrated landscape that often sees them competing with other disciplines to lead brand-building and deliver game-changing solutions.

The Report finds that techniques for generating and evaluating creative ideas remain a work in progress and that, perhaps most importantly, the creative talent challenge continues to rank as the thorniest of all. These findings are explored this week, with a free PDF of the Report available below.

"In recent years the cry for creative bravery in PR and work that challenges the status quo has become louder," says Now Go Create founder and co-author Claire Bridges. "The world is a noisy, crowded place and campaigns need to work ever harder to cut through. Yet this year’s Creativity in PR report highlights how big a part fear of failure plays in holding great ideas back."

Bridges pointed to a "disconnect between clients and agencies" as being a particularly significant factor. "Whatever side of the fence you’re on, creative bravery and risk-taking is nigh on impossible in any team or organization that doesn’t have a foundation of trust to create an environment where dissent and questioning established ways of doing things doesn’t turn into all-out war," she said. "With trust we can encourage and celebrate creative deviants – those who deliberately ask the difficult, provocative and challenging questions – a right not exclusive to those with the word ‘creative’ in their job title. Perhaps 2017 will be the year that the two sides can reach a better understanding of what the other really wants."

The war for ideas

Creativity continues to attract an increasing premium when it comes to agency hiring decisions. Clients rate it at 8.6 out of 10, with 65% rating it 9 or higher. Interestingly, agencies see it slightly differently: When asked how important creativity is to their clients’ hiring decisions, they rank it as 7.19 out of 10. 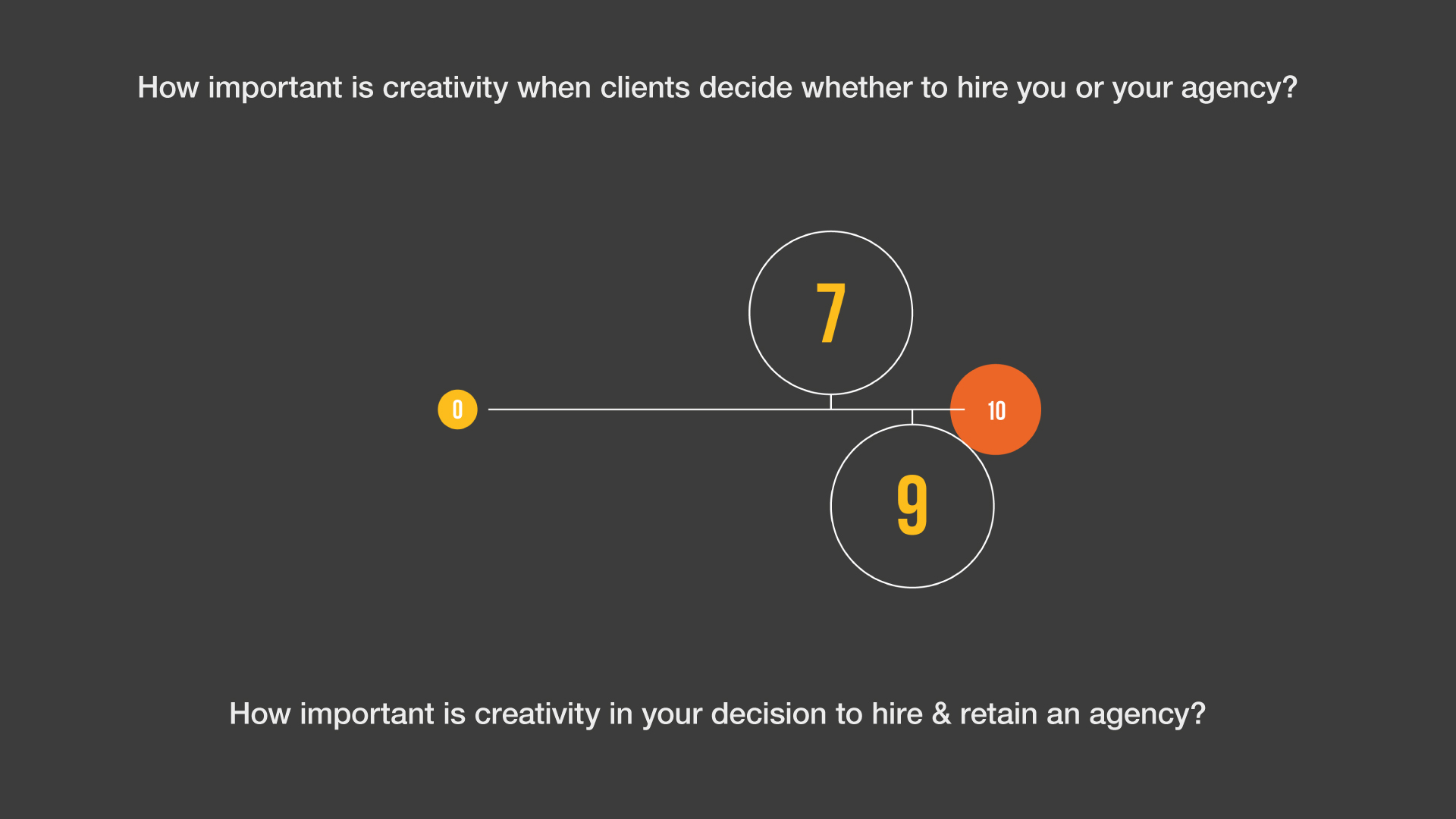 New this year, we asked an increasingly critical question — are PR firms actually leading creative on behalf of their clients, ahead of advertising or digital agencies? Or is it, as MillerCoors chief public affairs and communications officer Pete Marino puts it in his Q&A, "as rare as an albino buffalo"? 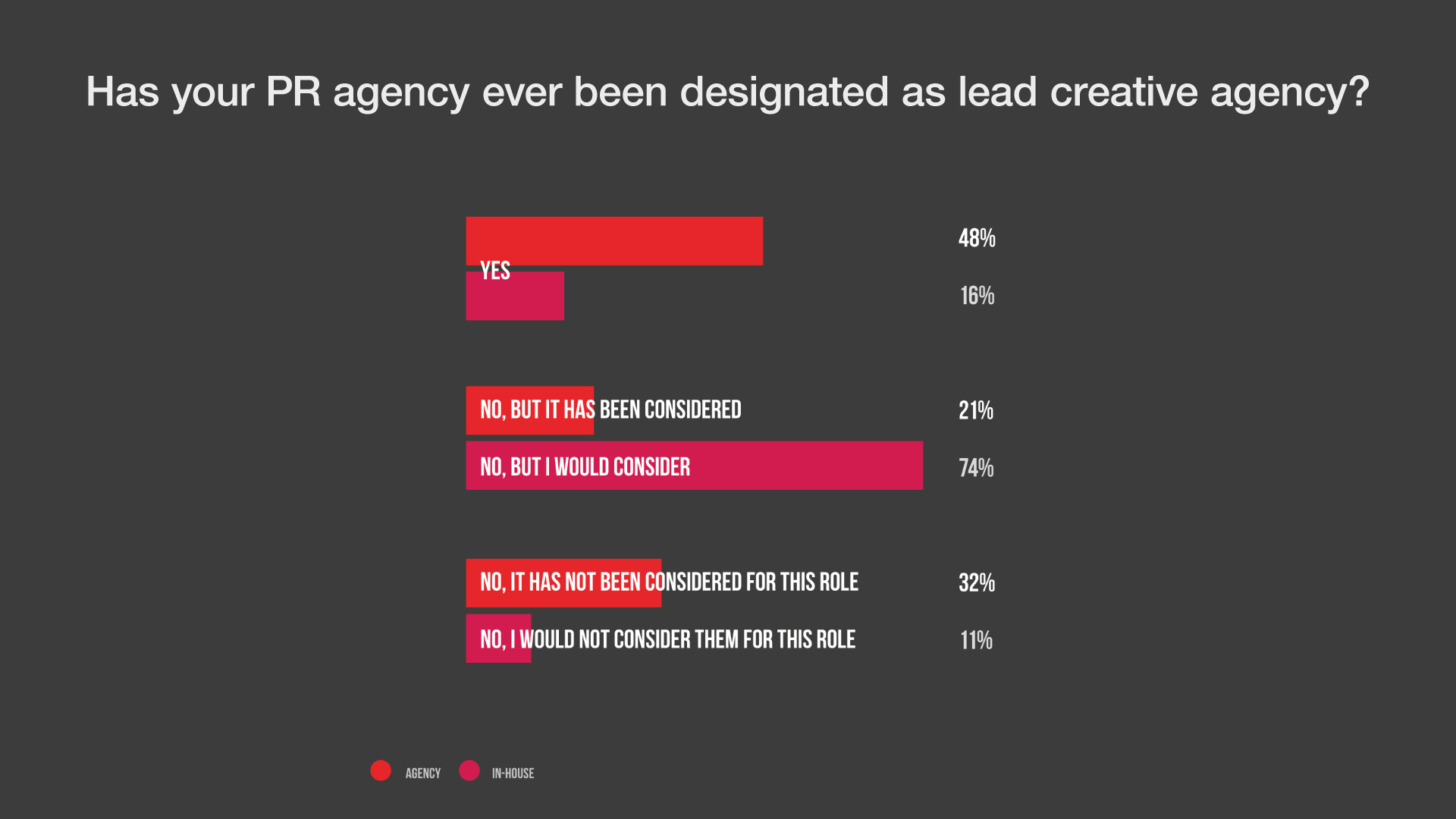 What is stopping PR firms from taking on lead creative duties? Significantly, both agencies and clients point to in-house structures being the key stumbling block, presumably a reflection of the siloed nature of many corporate organizations. Both sides, furthermore rank PR agency creative and strategic quality second and third, respectively, suggesting that agencies cannot get off the hook that easily. 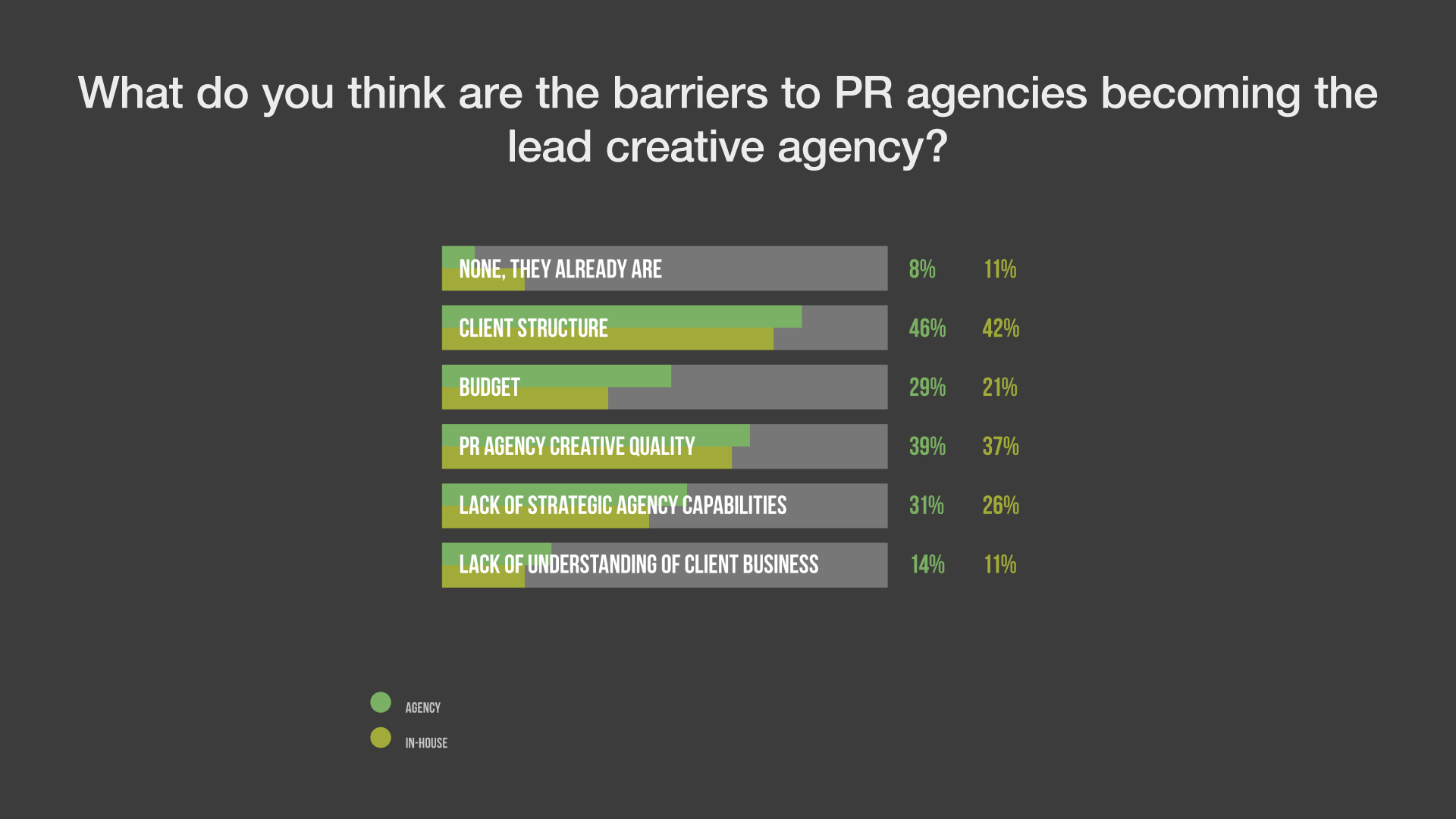 H+K Strategies chief creative director Simon Shaw believes the industry has only itself to blame for not fulfilling its creative ambitions. "I would ask, is the industry too ‘fat, lazy and happy’ to change?" he said. "For many years the public relations industry has been successful. We have the same conversations about change over, we love talking about change but do we really want to change? I hear again and again that time is our enemy and the PR industry is not paid to push the idea far enough… to become lead agency status we need to go the extra mile.

"Do we really want to change or are we happy with the status quo," continued Shaw. "Change is hard. Change is uncomfortable but change is necessary."

MillerCoors  chief public affairs and communications officer Pete Marino, one of several senior clients interviewed for this year's Report, believes that there are two factors which hamper PR agencies from playing the lead creative role. "One, is the depth and scale of creative departments at PR agencies."

"Many clients want and need creative depth and scale," said Marino. "Unfortunately, it rarely, if ever exists at PR agencies because agencies don’t invest enough here. Two, is the ability to get to the table, either because your internal client has the influence to get the PR agency there, the client is progressive and interested in the best idea regardless of it’s origin, or the PR agency has a track record and a reputation that intrigues the marketing team enough."

Another senior in-house communications leader — Ros Hunt from Coca-Cola European Partners' — believes that "PR agencies are still too shy of proposing ideas or executions that they might feel traditionally sit with an advertising agency," despite her belief that "we're  looking for the big idea, regardless of where it originates."

Almost 60% of clients are more likely to approach to their agency for big creative ideas than they were 12 months ago, solidifying a positive trend that first became clear in last year’s study. Significantly, given the obvious importance of creativity, PR firms have also seen a big increase when it comes to how happy clients are with their creative capabilities. 44% are consistently happy compared to 14% last year, while only 7% see it as a constant challenge, compared to 29% last year. 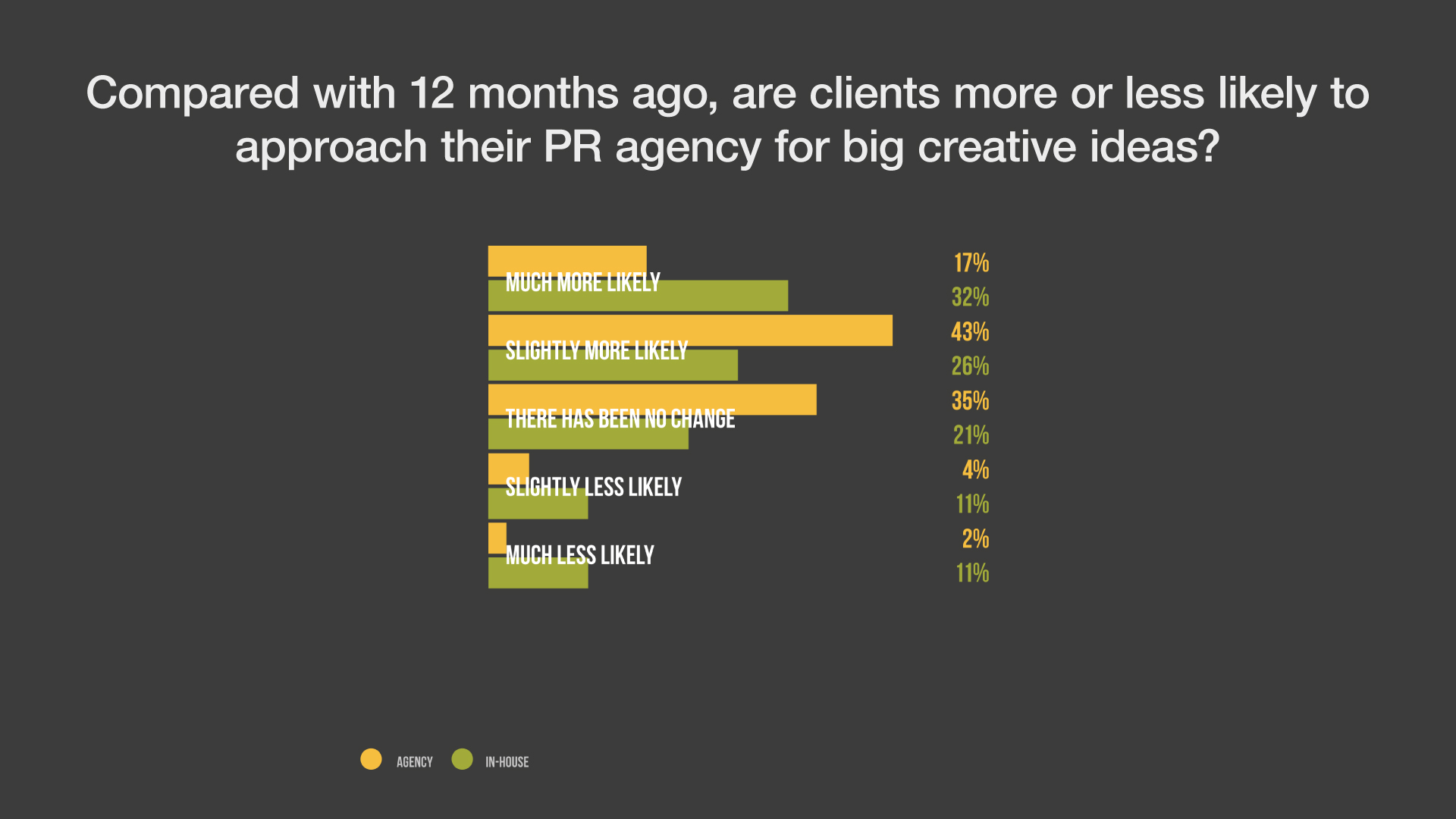 Meanwhile when clients are asked to rate the level of creativity at their PR agency, 58% opted for ‘Good’ while 42% saw it as ordinary or worse. The question that arises from these results must be: Are clients actually happy with average levels of creativity from their PR agency, despite how important it is to their hiring and retaining decisions? 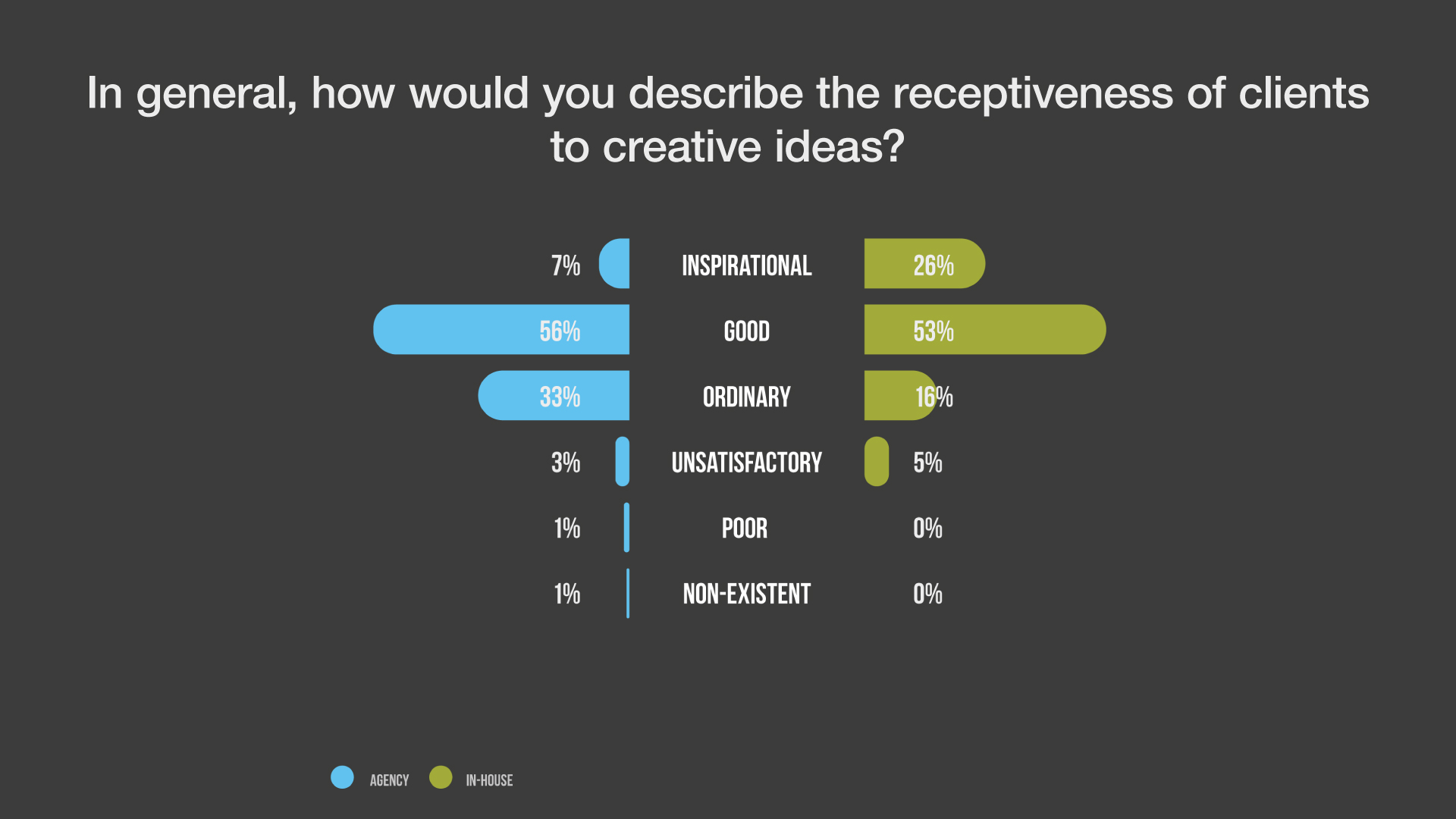 "I’m always open to a creative idea, particularly if its impact has been thought through," notes Alex Malouf, P&G corporate communications manager for the Arabian Peninsula. "[But] I’m sometimes skeptical of big ideas without an outcome attached; I don’t want creative ideas to be gimmicky."

That sense of divergence between client and agency continues when we explore the barriers to creativity, and is particularly telling when 'our own risk aversion' is considered. 11% of agencies cited this as a major factor whereas 43% of in-house respondents thought it was holding them back. Likewise, in-house execs are more likely to think that their management does not view creativity as being important (38%). The agency suggestion that client feedback is stifling their creativity is also noteworthy – more than two thirds believe they could deliver more creative ideas if their clients allowed it. 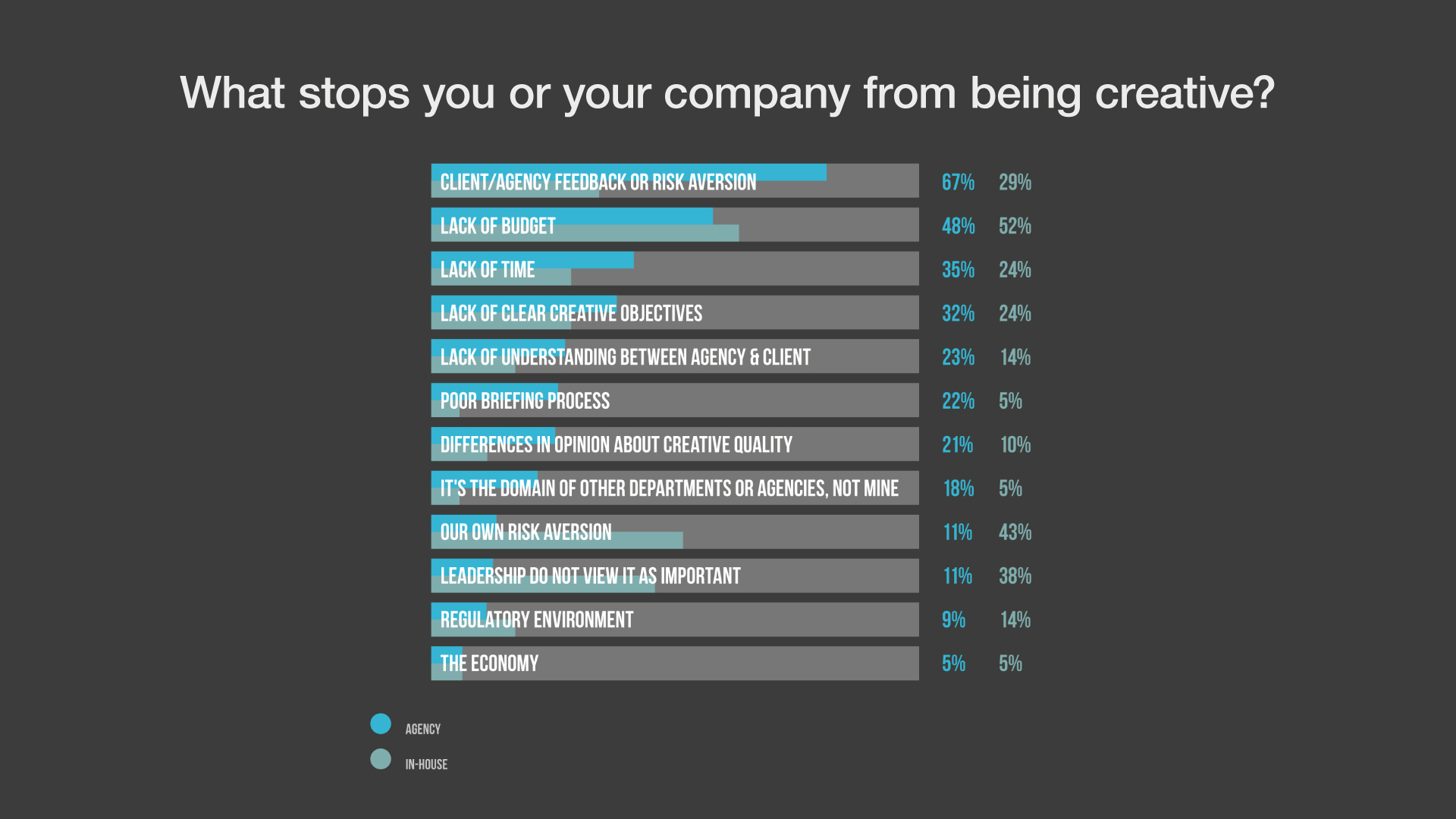 Bridges believes risk aversion is a "complex subject", influenced by "the confidence to sell ideas both internally and externally and the ability to determine and manage the risk."

"There are lots of models to help manage this process and the PR industry could learn a lot from the world of design thinking," adds Bridges. "Rapid prototype of idea, iterate, learn, improve. In PR we tend to place the onus on one, big campaign or idea when we could be honing and refining, or reinventing and idea – placing small bets to manage the risk rather than betting the farm."

H+K Strategies UK CEO Richard Millar, meanwhile, is a little less circumspect — pointing out that if people are not curious enough "to find and follow trends, to understand change, to join the dots to find new answers to today’s challenges," then the PR industry is not the place for them.

When asked what would improve their company's creative capabilities, the Report again finds two sides of the fence. Agencies want clearer client briefs (27%), and they also want to educate their clients (31%). Clients, meanwhile, are crying loudest for more budget (57%) and to be allowed to take more risks (48%). Agencies will no doubt be relieved to hear that only 14% of clients thought 'better agency partners' would boost creativity.