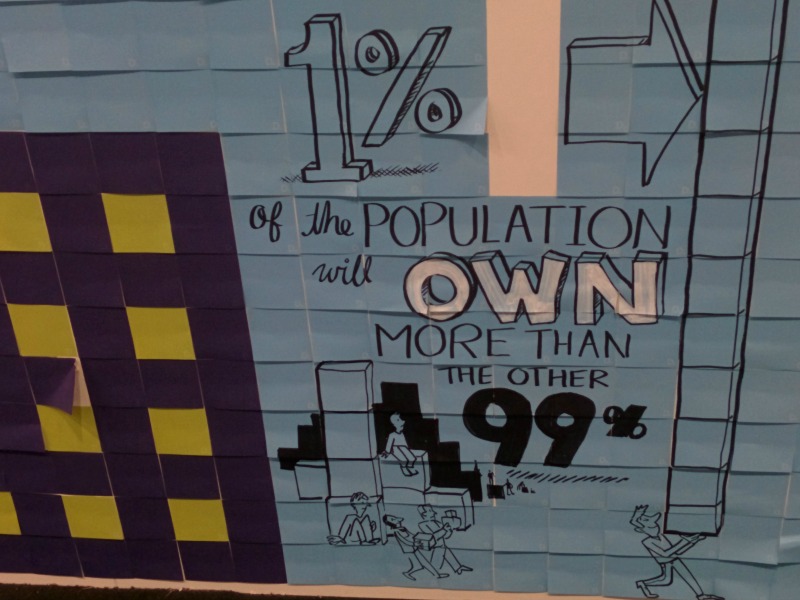 Rising inequality has profound implications for marketers, and other lessons from this year's World Economic Forum.

Love it or loathe it, the World Economic Forum has become a key fixture on the communications calendar, with senior agency and in-house executives alike flocking to Davos again in 2015.

View all of the Holmes Report's Davos coverage here

Much of their activity is focused on supporting the various business leaders in attendance, but the Davos agenda — always rich with discussions about the purpose of business — can offer considerable insight into the bigger public relations issues that are likely to dominate the corporate agenda in 2015.

Accordingly, here are five lessons from this year's edition of the conference, drawn from the observations of several of the senior PR executives in attendance.

1. Income inequality"Brands focused on marketing to the middle-class will suffer as more middle-class people drop below the poverty line" Last year, income inequality cracked the top-five of the WEF's global risks report, but this year it was nowhere to be seen. That left the door open for Oxfam to smartly dominate the conference's launch, by pointing out that the world's richest 85 people are as wealthy as the poorest 3.5bn of the world's population. The stark disparity in income levels may not seem to be of pressing importance to PR folk, but it should be, argues Ketchum CEO Rob Flaherty.

"The growing anger and despondence among the marginalized poor and lower middle class is an issue too pervasive to be solved by government alone and the violent uprisings already underway, born of frustration, will become an issue for most companies and their brands sooner than you may think," he explains.

"Don’t believe that the sputtering of the minimally-organized Occupy movement signals clear sailing," he adds. "All that anger didn’t go away.  It was real, even if not backed by professional organization. And now it is looking for and finding expression elsewhere."

Richard Edelman agreed, noting that business must change its behaviour in the face of "a lot of justified anger out there."

"Then think like a pragmatist," he advises. "What happens when your market shrinks? Brands focused on marketing to the middle-class will suffer as more middle-class people drop below the poverty line. They will sound painfully off-key as more and more of their market struggles to pay rent and buy groceries."

APCO chairman Margery Kraus, however, sounded a more positive note about progress, despite the scale of the challenge.

"Given my dozen years or so coming to Davos, it seemed this year more than ever before there was a growing recognition in the business community (and by the WEF) that without addressing inclusiveness we were feeding the beast of future extremism and the subsequent violence," she noted. "That it was hard to have a successful business or great advances for the future in a 'failed world' where there are not enough public resources to provide the basics of life to those who need them."

2. The rise of technology"Davos has become another one of the big tech conferences" A more positive trend is the rise and rise of technology, making this year's Davos sometime seem like more of a snowbound SXSW than an event that has traditionally been dominated by the financial industry. Even the week's hottest party ticket came courtesy of tech darlings Salesforce, in contrast to the more staid receptions held by bankers and financiers.

Burson-Marsteller CEO Don Baer sees several reasons behind the technology sector's dominant presence at the 2015 World Economic Forum, starting with "the natural fascination that people tend to have about technology innovation."

"The technology sector leader and CEOs of the major companies are the rockstars of our age," he adds. "And they stand out here in the same way."

"This is a place that has traditionally been focused on solving problems — many of those issues relate to the role of technology and the internet, questions of privacy and security," continues Baer. "How do you provide healthcare and education, how do you stimulate economic growth around the world?"

"Davos has become another one of the big tech conferences," concludes Baer, but it is not all plain sailing. A panel focused on trust agreed that the "potential for backlash" against technology companies is real, given their tax policies and "robber-baron mentality." Deutsche Bank chairman Paul Achleitner, for example, advised tech companies to work more with government, because more regulation is coming.

3. Permanent volatility"Speed and agility are of the essence" Much of the Davos agenda focuses on, as Kraus puts it, "advances and discoveries for the future that could extend life, make our cities cleaner and safer, bring technology to underserved parts of the world and advance civilization."

Yet, the world's increasing volatility provided an inescable backdrop to all of these conversations. "Almost in equal proportions, there was uncertainty and violence and suffering that was happening in real time across the globe, underscored by the recent events in Paris and the realization and understanding that we are all vulnerable," adds Kraus. "I know this has always been the case to some degree but it seemed more of a stark contrast this year."

"Speed and agility," says MSLGroup CEO Olivier Fleurot, "are of the essence. Hence the need for PR companies to prepare and train their clients on crisis communication."

Neither can business shirk its responsibilities where these risks are concerned. "It is increasingly evident that no single government can effect real change in isolation," explains FleishmanHillard Brussels MD Caroline Wunnerlich. "Collective efforts of countries and multinationals are needed to respond to threats of radicalism, resource shortages, health epidemics and youth unemployment."

4. New CSR"These developments all point in the direction of the 'shared value' agenda" Corporate social responsibility, says Fleurot, can no longer be considered an "option" that companies may wish to consider.

"More and more CEOs realize that beyond generating good results they must make sure that their company has a positive impact on its environment, on clients, on suppliers, on staff," he explains. "It is not a 'nice to have' but a must have. Especially if you want employees to be proud of their company and if you want to attract talented millenials."

An important factor here, adds Wunnerlich, is the appetite from business world to partner with the public sector.

"You hear more and more about initiatives from the Gates and Rockefeller and corporate foundations, such as the Philips Foundation, which used the background of the WEF to announce its innovation partnerships with the Red Cross and UNICEF," she points out. "These developments all point in the direction of the 'shared value' agenda."

Both were speaking from a macro-economic viewpoint, but PR firms will be aware that conditions are unlikely to improve in Europe in 2015. Europe's continued economic malaise, has significant implications for the public relations industry, given the impact on marketing and communications budgets in the region.

"Get Comfortable Being Uncomfortable": Why Brands Can't Have It All
Arun Sudhaman
// 28 Sep 2021

Podcast: Lenovo‘s Genevieve Hilton
PRovoke Media
// 11 Oct 2021
View All
comments powered by Disqus
Get your agency into the PR industry's most comprehensive listing of consultancies and teams from around the world
REGISTER NOW ×