Please refer to our Privacy Policy for important information on the use of cookies. By continuing to use this website, you agree to this.
Home Longreads H+K's AnnaMaria DeSalva: “The Higher Order Idea For Us Is Value Creation” 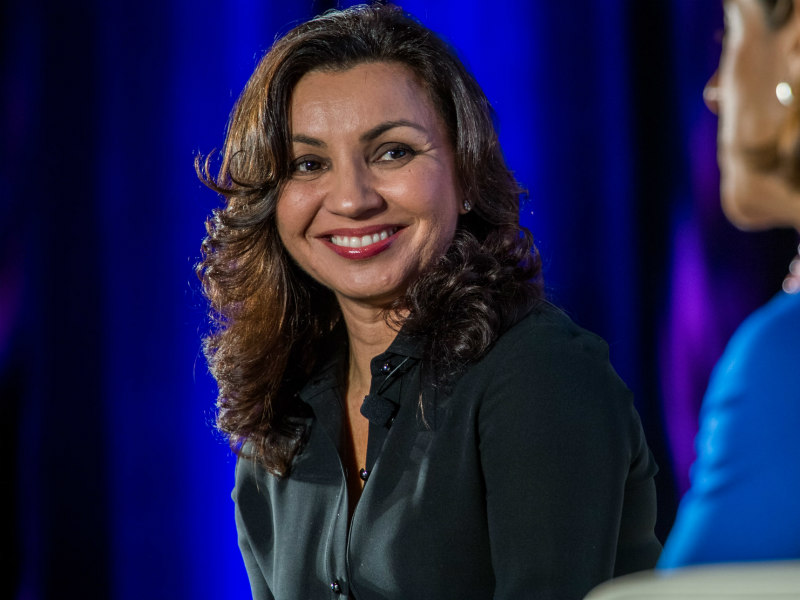 H+K's AnnaMaria DeSalva: “The Higher Order Idea For Us Is Value Creation”

A couple of years ago, the thing that made AnnaMaria DeSalva’s appointment as chief executive of a top 10 PR agency unusual would have been her gender. But today, with Gail Heimann leading Weber Shandwick, Donna Imperato at the helm of BCW, Barri Rafferty heading up Ketchum, four of the world’s seven largest PR agencies are women—although it is worth noting that DeSalva is the first female CEO in Hill+Knowlton’s 92-year history.

But what differentiates DeSalva from any of her peers today is the fact that she comes to a top agency job after more than a decade in high-ranking corporate roles.

A quick historical survey makes it clear that relatively few people have made the transition. Lou Capozzi, who headed MSL for a decade until 2008, had a seven-year stint in-house at Aetna earlier in his career; former Burson-Marsteller CEO Don Baer spent a decade in strategy roles with media company Discovery Communications; and Tom Nides came to what was then Burson-Marsteller from Credit Suisse—although his agency career lasted just six months.

It’s surprising that so few have made the shift from corporate communications to the PR business, given that there’s an argument that all agency people should have some experience of what it’s like to spend time on the client side.

Certainly DeSalva sees her in-house experience—her career has been almost evenly-split between the two realms—as beneficial in her current role.

“My first corporate experience with was Bristol-Myers Squibb, where I was head of oncology public affairs and where I got my first international experience,” she says. “We were developing markets internationally.”

She moved from BMS to the agency world in 2002, spending four years heading the healthcare practice at GCI prior to its merger with Cohn & Wolfe, and then serving in a similar role at H+K for three years, during which time she also advised the Food & Drug Administration on risk communication, before returning to the corporate side of the business in 2009 as vice president of corporate affairs at Pfizer.

“There was a lot going on in healthcare at that time,” she says, probably understating the scale of disruption in the pharmaceutical industry. Pfizer had acquired Wyeth—a company known for the depth of its science expertise—in what was the sector’s largest ever deal in January of 2009, and DeSalva’s first order of business was spearheading both communications and government affairs activity to ensure the merger’s success.

“It was an extraordinary experience,” she says. “Really intense transformation work. We were taking billions of dollars of cost out of the business while investing in research and development. Winning the hearts and mind of the people at Pfizer and the former Wyeth people was absolutely critical to the success of the merger as was engaging the financial community and ensuring they understood the new strategy. It was a real study in corporate transformation and the central role of communications.”

The success of the Pfizer-Wyeth merger—all the more striking because prior mergers in the healthcare sector had a decidedly mixed track record—led to DeSalva’s recruitment in 2014 by DuPont chief executive Ellen Kullman, who was also leading the transformation of a storied science-driven company.

“She knew the communications piece of the company was not as strong as it needed to be, and she knew there were going to be challenges,” says DeSalva.

And there were. Kullman found herself in a proxy battle with activist investor Nelson Peltz and his investment company Trian Fund Management, which was looking for the company to cut costs. Five months after successfully rebuffing Peltz’s advances, she made the surprise decision to step down, to be replaced by Ed Breen, who presided over the merger between DuPont and its fellow chemical giant Dow—a complex and drawn-out three-year process—and then the creation of three new companies.

“In five years there was a hostile proxy fight, an unexpected CEO transition, a complicated merger with major regulatory issues and financial implications, the integration of two giant companies, and then a restructuring that created three new global, publicly-traded chemical companies,” says DeSalva. “The communications demands were extraordinary, from making sure employees were on board throughout the process to managing external stakeholders.”

Through all of that, she was one of Breen’s closest advisors, a role that continued after she left the chief communications officer role and became an independent consultant.

“Among the many things I learned during that time was a tremendous respect for the responsibility and accountability of the CEO in terms of value creation, and the need for the CEO and the CCO to be solving for that all the time.”

DeSalva also developed an appreciation for the way various stakeholder groups—employees, investors, regulators—are “interdependent and interconnected. On the agency side, you can lose sight of that,” she says, particularly if the scope of your assignment is limited to financial communications, or public affairs, or employee communications. At DuPont, she says, she worked primarily with specialist agencies and she—in her role of CCO—was responsible for integration.

But not surprisingly, given Hill+Knowlton’s legacy in public affairs, corporate reputation and even investor relations, DeSalva believes there is a benefit to being able to offer a wide range of corporate affairs capabilities—even if the firms that currently dominate the high-stakes C-suite communications niche tend to be specialists and boutiques.

“We don’t have to be the complete solution for all of our clients,” she says. “But we do want to be at the heart of our partners’ business. It would be a benefit for many of them to have a partner that can be a kind of Swiss Army knife.”

DeSalva has been getting a feel for the agency’s capabilities during the “listening and discovery” tour that occupied much of her time during the first 100 days since she was appointed to the global chairman and CEO role in May of this year. She has also been talking to clients “about whether my vision matches their needs.”

The early feedback has been encouraging, she says, which is not particularly surprising. When the Holmes Report convened a CCO Roundtable in Cannes earlier this year, the participants were unanimous when it came to their number one need from a PR agency partner: the ability to provide better strategic advice on the major business challenges confronting companies in a complex environment.

But that still leaves two questions for DeSalva and her leadership team at Hill+Knowlton to answer. The first is whether H+K is in a position to meet that need.

She also acknowledges that the firm’s strongest capabilities are not evenly distributed: H+K has been struggling to bring its US operations back up to the level of its outstanding EMEA business for at least a decade—which was the main reason DeSalva’s predecessor Jack Martin appointed the EMEA leadership duo of Lars Erik Grønntun and Richard Millar to co-president roles in his last significant restructuring.

“The brand is so vibrant outside the US,” says DeSalva. “We have a vibrant international network.” (She recently realigned the management structure, assigning Millar responsibility for the US operations, while Grønntun will lead the international portfolio, taking responsibility for the major markets of UK, Germany, Canada and Greater China, as well as the Asia, LatAm, METIA, Continental Europe and Nordics clusters).

The other big question is whether a PR firm can afford to focus all—or even most—of its attention on the CCO’s needs at a time when communications budgets are relatively static and most agencies see the greatest growth opportunity in serving the needs of the CMO and elevating PR’s role in the marketing realm.

DeSalva certainly doesn’t plan to neglect that side of the business.

“The higher order idea for us is value creation,” she says. “That can mean helping our clients drive commercial growth, manage risk, or grow their reputation. We want to be involved in all of these areas.”

And she points out that H+K has been building its creative reputation in Europe, where Millar has built a creative studio and where the firm's work for clients such as adidas has won numerous awards. And, squaring the circle, she points to the firm’s work for Spotify, recently expanded to include regulatory affairs in the EU, as an example of how the kind of creativity usually associated with marketing work can have a positive impact in areas like public policy.

To ensure that the entire organization aligns around delivering value—in the commercial realm and in the corporate realm, in the US and in the global operations—DeSalva will need to draw on all of her experience leading transformation and achieving stakeholder buy-in at companies like Pfizer and DuPont.

“I am very purposeful and outcomes-driven,” she says. “I have a mission orientation. I want to accomplish the mission, but I want to do it with the backing and support of a committed team. I’m collaborative. I want to make sure the mission is shared. So I think my leadership style is collaborative and consultative and engaging.”

She is confident that will be a good fit for the agency she is now leading.

“I have a theory about Hill+Knowlton,” DeSalva says. “There’s something about the heritage and character of this company that attracts special people. The kind of people who are drawn to H+K are very dedicated to the profession, and so there’s a very good energy. The culture is collaborative and collegial. It’s a great fit.”

Account News In Brief (September 6, 2022)
PRovoke Media
// 06 Sep 2022
View All
comments powered by Disqus
Get your agency into the PR industry's most comprehensive listing of consultancies and teams from around the world
REGISTER NOW ×