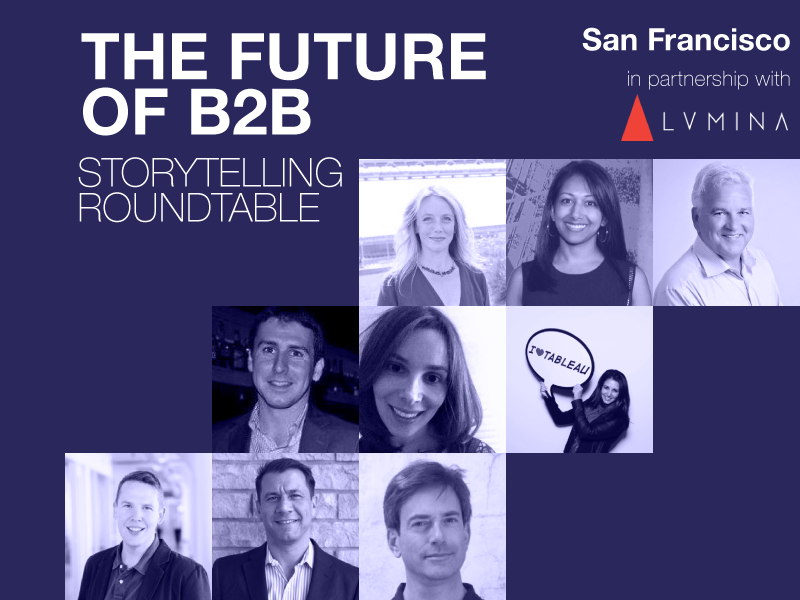 Roundtable: The Impact of the Human Story

Marketing and communications professionals gathered in San Francisco to explore the future of B2B storytelling.

This era of authenticity and transparency has compelled B2B organizations to strip away layers of jargon to unearth a more humanizing narrative. But as storytelling becomes more sophisticated within these organizations — the processes, sources and angles for crafting these narratives is evolving.

During a recent roundtable in San Francisco that focused on B2B storytelling, senior communications and marketing professionals explored the ways these trends are unfolding within their organizations and the broader industry.

Starting the discussion around how storytelling is structured at each organization, Saleforce’s Joe Ciarallo noted the CRM giant recently hired its first chief communications officer — Corey DuBrowa from Starbucks, altering the role of communications within the company.

“He’s our first [C-level communications professional] at Salesforce and reports directly into our CEO Marc Benioff,” said Ciarallo, adding the company's key storytelling tenants are part of  the Salesforce ethos. “We’re values driven: trust, equality, growth, innovation are our four main values and all of our storytelling should map to one of those key values.”

“It’s not just the storytelling, it’s the actions we take,” Ciarallo added. “So whether it is coming out against some of the discriminatory laws against LGBT communities in states like Indiana, we are really putting our values into action.”

Meanwhile, Tableau’s Keyana Corliss said at her company communications centers around “empowerment. Instead of just sending out case studies and white papers — which also we do — we do a lot of engagement through our Tableau Public platform where anyone put in their data and engage through visualizations.”

Meanwhile, Prezi’s Stefanie Grossman noted that because Prezi houses the largest public presentation database, the organization views itself as “a visual storytelling platform.”

“The way we tell our story is through our own content and public presentations — it’s a huge boon on SEO,” she said. Because TED was among its first investors, Prezi benefited from a connection with master storytellers early on.

The most significant change for B2B storytelling has been doing away with narratives anchored in functionality for stories with humans at the core. For instance, SkyFollow’s Rigatuso said his organization focuses on stories that “elevate somebody."

“You are recognizing the human aspects of the situation,” he said. “It’s about the people, their situations, the emotions — that’s when you go from pure content marketing to telling a story.”

While distilling stories to the human element seems intuitive, not all sectors easily lend themselves to these angles. For instance, within the security sector, scare tactics tend to dominate.

“You’ll never find the hacker in a hoodie anywhere in any piece of collateral on our website,” Preempt’s Howland said. “The story we tell is more aspirational, about empowerment, and it’s thinking about the challenges that security teams have.”

Because of the sheer volume of security vendors, buyers tend to be cautious of overt sales pitches and, in response, Preempt tries to standout by showcasing problem-solving rather than piling onto the scare narrative.

Tableau’s Corliss said until recently mining an organization’s data for storytelling was considered too high-risk, for fear it would come across as spying on customers.

“And now I think it’s just like par for the course, everyone has your data — and it’s acceptable,” she said. “It is actually very cool now to be a data-driven company. It means you are making better decisions, you are running more efficiently, you are serving your customers better. People have shifted to now say ‘you’re serving me better’ versus ‘you’re spying on me.’”

Lumina’s Ben Merrit noted that “for so long B2B companies got caught up in speaking in this unnatural language – speeds and fees, synergies. But now the human element has returned and that’s exciting.”

But moving beyond technical jargon into the human dimension has also pushed B2B companies into the realm of social purpose and issues. For instance, Salesforce has taken a bold stance on equality — calling for businesses to close "the equality gap with the same energy put into creating new products and markets," on its website.

“We believe it’s the right thing to do first and foremost for our stakeholders,” Ciarallo said. “But we also know this younger generation of buyer — whether it’s a B2C or B2B —  is looking to engage with companies that stand for something that they can relate to and it’s no longer acceptable to be on the sidelines of some of these big issues.”

Corliss added, “we are just starting to manage [stepping into social issues]. We are just getting big enough, we’re in Seattle. We’re not coming out as strong as Marc Benioff, but we do have people on H1-B visas and we have values — but it’s been a challenging balance.”

“It’s all coming full circle to being a human, being authentic and having an emotional connection,” David Patterson added. “As a consumer of technology I personally want companies to have some kind of stance — even if I disagree with them. This is a brave new world that we’re in right now and I expect companies, business leaders to have some kind of opinion.”

Lumina’s Merritt noted that Silicon Valley, in particular, is facing a reckoning after Facebook’s role in the 2016 presidential election, the harassment culture at Uber, among other instances of bad corporate behavior among technology players.

“It’s almost like a bit of a backlash is going on against the whole Silicon Valley in terms of its priorities,” he said. “So, how can we be more socially conscious, how can we have a human face?”

Preempt’s Howland noted her organization intentionally stayed away from questions around the US presidential election email hacks and the cyber attacks from Russia.

“As we get bigger our stance will probably broaden,” she said.

For most B2B organizations the ultimate objective of producing more humanizing content is sales impact. Ensuring the sales teams are armed with the content and using it to accelerate deals is an area that PR and communications is increasingly participating.

“No matter how great a marketer you are and how well you are able to relate to people — it doesn’t really mean anything if your sales team doesn’t understand that messaging,” Tableau’s Corliss said. “Our corporate communications team works a lot with our sales enablement teams to make sure there’s consistent messaging.”

Howland added that for startups emerging in a crowded market, leveraging stories is “really critical to differentiate from the competition. [Sales] has to be part of the process at this point.”

Lumina’s Burnham noted the risk of B2B content to become too heavy-handed if the push from sales is too strong. “But that’s where the opportunity to rethink the communications strategy is,” he added.

As the narrative has expanded, so has the number of the credible spokespeople for organizations. In today’s storytelling landscape it’s not unusual to hear from various corners of an organization, depending on the story that’s being told. This can, however, expose organizations more risk.

“Whether it’s your CTO or a great product manager, it’s about the relationships that you build with those right set of influencers,” Lumina’s Merritt pointed out. “Sometimes companies and agencies might over-message. Sometimes it’s fun to see people go in a different direction as long as you can bridge it back to the core message.”

Salesforce’s Ciarallo cited the Edelman Trust Barometer, noting the most credible spokespeople are relatable or considered to be peers of the inteded audience. “We have spokespeople who can go into interviews and say ‘I was literally you at my former organization’ [in terms of job title]. That helps tremendously,” he added.

When it comes to curating these stories, organizations vary on having a structured approach and more informally conducting interviews to glean stories from experts.

“We have a chief product officer who can take the most technical thing and make it sound [so obvious]  and fascinating,” Corliss said. “I make it a point when I’m in Seattle to go to his office to talk about what he’s working on.”

Meanwhile, Howland pointed to weekly meetings with the product teams “to understand what they’re working on, what they’re going after and find out what they’re excited about.”

Another challenge is managing expectations from over-eager engineers or product specialists around iterations that don’t hold equal importance to a wider audience.

“That’s more common,” Corliss said. “We deal with that every day.”

Patterson spoke to the importance of managing various constituencies within an organization — a challenge that can be overlooked by the agency team who sometimes only “sees the tip of the iceberg.”

“People will sometimes just drop by your desk unexpected and say ‘I have this idea’ and I’ll often ask them to put it down on paper to see if it has legs,” Patterson added. “When you say — here’s an idea, turn it into a campaign, I need you to be an active participant with me.”

When it comes to measurement, the group discussed changing expectations from the CEOs of their organizations around the PR and communications functions.

Prempt’s Howland said when it comes to press coverage, she correlates this with website traffic — not just at the time of the media hit but also over time.

“If you don’t have good data to share,” she said. “Then it is hard to sell what you’re doing up to the CEO and show the value you are getting.”

Rigatuso emphasized the importance of moving away from traditional metrics  and instead map activities back to the organization’s key performance metrics.

“It could be lead generation, it could be more qualitative — like building a compelling narrative or dispelling something that’s wrong,” he said. “But if you’re not tying what you’re doing back to the company-wide goals, then you’re going to have a problem.”

While much debate has focused on the usefulness of social media for B2B players, many of the participants noted successes with various channels.

“I think Facebook is really hard for B2B companies unless the companies figure out a way to be a part of people’s normal lives — not just their professional ones,” Corliss said. “This goes back to humanizing technology, making it part of their lives. You can’t post a whitepaper on Facebook.”

“It’s hard when you’re in-house and being pulled in so many different directions,” he said. “I rely on my agencies  to tell me when something’s not going to work — and come back with three other great ideas.”

Can Responsible Companies Do Business With China?
Paul Holmes
// 14 Oct 2019
View All

Implications Of Coronavirus: How To Communicate In Turbulent Times
Scott Kronick
// 25 Mar 2020