Please refer to our Privacy Policy for important information on the use of cookies. By continuing to use this website, you agree to this.
Home Longreads Weber Shandwick And Trigger Top 2015 Global Creative Index

Weber Shandwick has returned to top spot in the 2015 Global Creative Index, the Holmes Report's fourth edition of an initative which analyses entries and winners from more than 25 PR award programmes from around the world over a 12 month period.

Ogilvy PR placed second, relinquishing the number one spot it had held for the past two years. MSLGroup jumped from fifth to third, powered by its work on Always’ #LikeAGirl, while Edelman dropped to fourth from second place last year. The top five was rounded out by Ketchum, which slipped one spot compared to its 2014 showing. 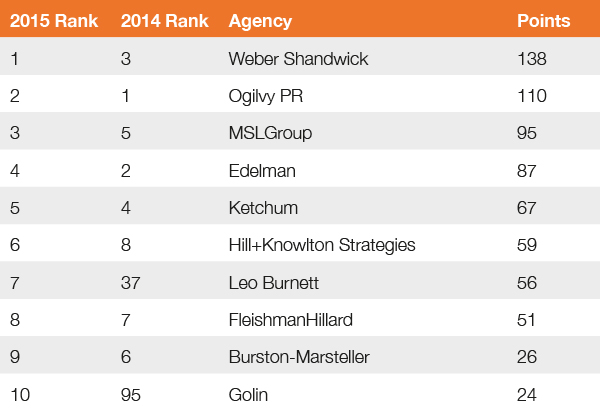 H+K Strategies jumped two spots to sixth, while there are two new entrants in the top 10: advertising agency Leo Burnett (7th) and Golin, which jumped from 95th in 2014 to 10th position.

With FleishmanHillard and Burson-Marsteller also featuring, the top of the overall agency table is again dominated by global PR networks, thanks to their volume of awards. 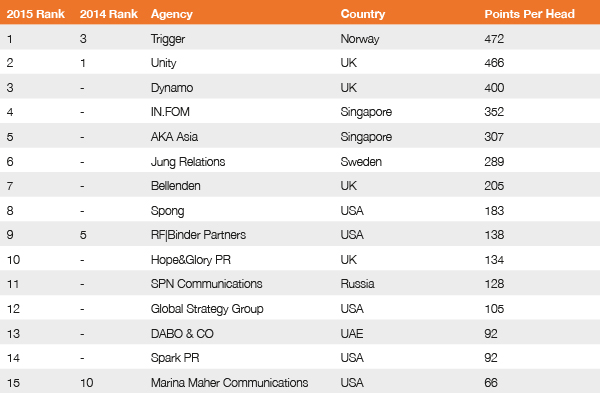 In 2015, this title is taken by Trigger, an eye-catching agency that hails from the relatively unfashionable PR market of Norway. Trigger narrowly edged out UK creative darlings Unity, which had held the top spot since 2013, thanks to its brilliant #StopTheWedding campaign for Plan Norway, along with work for Norwegian and Aktiv Against Cancer.

Unity’s continued presence at the top of the table again owed much to its work for big consumer brands, including Aquafresh and Marks & Spencer. Another UK firm, Dynamo, emerged to take third place, powered by much-lauded campaigns for M3D.

Two Singapore agencies — AKA Asia and IN.FOM — round out the top five, demonstrating the geography is not a factor when it comes to creative prowess. However, the remainder of the ‘pound for pound’ ranking is dominated by firms from traditional powerhouse PR markets, including Sweden’s Jung Relations, US consumer boutiques RF | Binder and Spong, and two more firms from the UK: public affairs player Bellenden and consumer shop Hope & Glory.

Always’ #LikeAGirl Tops Campaign Ranking
​
#LikeAGirl, the Always initiative to empower female teenagers, has emerged as the most awarded PR campaign in the world, according to the Holmes Report’s 2015 Global Creative Index.

The Index analysed entries and winners from more than 25 PR award programmes from around the world, over a 12-month period, using the 2015 Cannes Lions as a cut-off point. Scores were weighted according to a Holmes Report formula that placed particular emphasis on Best of Show winners.

At Cannes, of course, the #LikeAGirl campaign from Leo Burnett and MSLGroup scooped several categories, including the PR Lions. Built around a simple, compelling insight, which turned #LikeAGirl from an insult into a movement for confidence, the campaign was lauded by judges and the general public alike, becoming an iconic barometer of rising female empowerment.

#LikeAGirl, which won at numerous other PR shows, including SABRE Awards and PRWeek Global, dominated this year’s rankings. It placed well ahead of Singapore’s relatively unheralded Nanyang Technological University, which took second spot for its ‘Global University on the Rise’ effort. 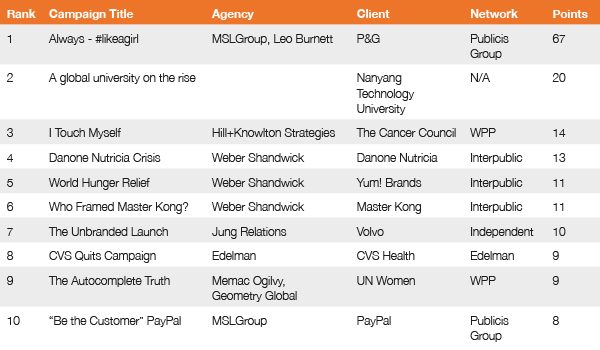 In third spot was another Asia-Pacific campaign: the evocative ‘I Touch Myself’ initiative from Australia’s Cancer Council by H+K Strategies.

The results, which rank the top 10 PR campaigns, reinforce the importance that an inspiring social purpose plays when allied to the disruptive creativity that is becoming a hallmark of the best public relations work. Many of this years top-ranked campaigns also showcase a refreshing willingness to empower fans and consumers, relinquishing control in a bid to establish more authentic relationships.

No less than five of the top 10 campaigns featured a strong social element, often fuelling popular movements for change and testifying to the power of public relations. Two campaigns clearly highlighting this trend were ‘World Hunger Relief’ by Weber Shandwick and ‘CVS Quits’ in conjunction with Edelman. Similarly, 'The Autocomplete Truth' from UN Women and Memac Ogilvy, focused attention on violence against women by using real Google autocomplete entries.

All of the top 10 campaigns, meanwhile, provide continued evidence of the integration that now sees great campaigns combing earned, owned and paid media to impressive effect. The blurring bloundaries between traditional disciplines is exemplified by a campaign like Volvo’s ‘Unbranded Launch’, which turned traditional consumer marketing conventions on their head.

Once again, there is a refreshing geographic diversity among the top 10 campaigns, featuring work from traditional powerhouse markets such as the US and UK, along with eye-catching programmes from Australia, Singapore, China, Sweden and the Middle East.

The Global Creative Index analyses entries and winners from more than 25 PR award programmes from around the world, over a 12 month period, using the 2015 Cannes Lions as a cut-off point. Scores were weighted according to a Holmes Report formula that placed particular emphasis on Best of Show winners.