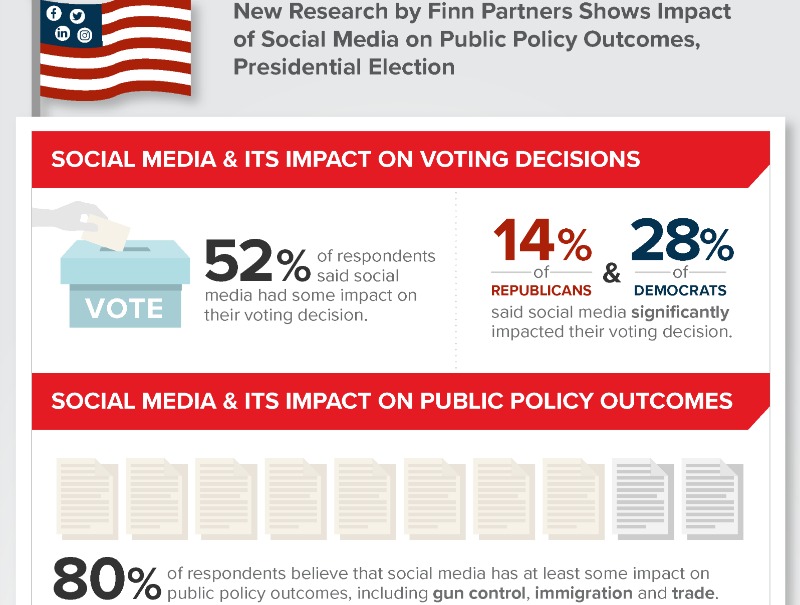 Nearly 80% of Americans believe that social media has at least some impact on public policy outcomes, according to a new Finn Futures survey

Nearly 80% of Americans believe that social media has at least some impact on public policy outcomes, according to a new Finn Futures survey of 1,000 American adults by public relations firm Finn Partners. In particular, they believe social media has influence on issues including gun control, immigration and trade.

College aged respondents (53%), Democrats (32%) and Independents (31%) were most likely to say that social media has a “significant” impact.  However, respondents were split on whether social media’s impact on informing the public on policy issues is positive: nearly half said it was, while one-third believe it is negative.

“As members of Congress continue to hear from their constituents and policy advocates on many new communications platforms, social media is playing a bigger role in shaping public policy,” says Jessica Ross, managing partner, public affairs at Finn. “Increasingly, we are seeing policy protests organized on social media. The immediacy, transparency and sharability of social media means that members of Congress must be prepared to respond in-kind in an increasingly digital way.”

The survey also found that while many Americans were active on social media on policy and political issues, both prior to and after President Trump’s inauguration, many refrained from contributing content because the tone of social media was ”too toxic or negative” or that they were “tired of hearing about the Presidential election,”

The majority of respondents (52%) said social media had some impact on their voting decision, with Democrats (28%) most likely to say that social media significantly impacted on their vote (compared to 14% of Republicans).

More than half of respondents (57%) shared their political opinions and feelings via social media at least sometimes, and nearly 30% of respondents took a break from social media during the presidential election cycle. When asked why they stepped back, many of them said that the “tone of social media was too toxic or negative” (54%). This feeling of negativity of news around the election was even true across political parties (64% Republicans vs 54% Democrats). Respondents also said they were “tired of hearing about the Presidential election” (48%).