2016 study investigates whether PR industry is capable of attracting the right creative talent, and why they might struggle to keep and develop them.

Talent is the perennial challenge identified by our Creativity In PR study, which this year explores whether the industry is doing a good enough job at recruiting and retaining the right creative people, and again indicates the proportion of women that are tasked with creative leadership.

The 2016 Report, co-authored by Now Go Create and conducted in conjunction with H+K Strategies, launched yesterday by asking whether the PR industry has what it takes to win the war for ideas.  We also asked agency and in-house executives to answer several questions on how creative talent is recruited, rewarded, retained and developed. A free PDF of the study is available below.

One of the challenges often raised by PR firms revolves around their ability to attract the best creative talent. Accordingly, a new question this year addressed this issue, with more respondents (35%) noting that creative talent prefer to work at another type of agency, presumably in a competing discipline. 27%, meanwhile, believe that agencies are not trying hard enough to hire creative talent, while 18% think salaries are the issue. 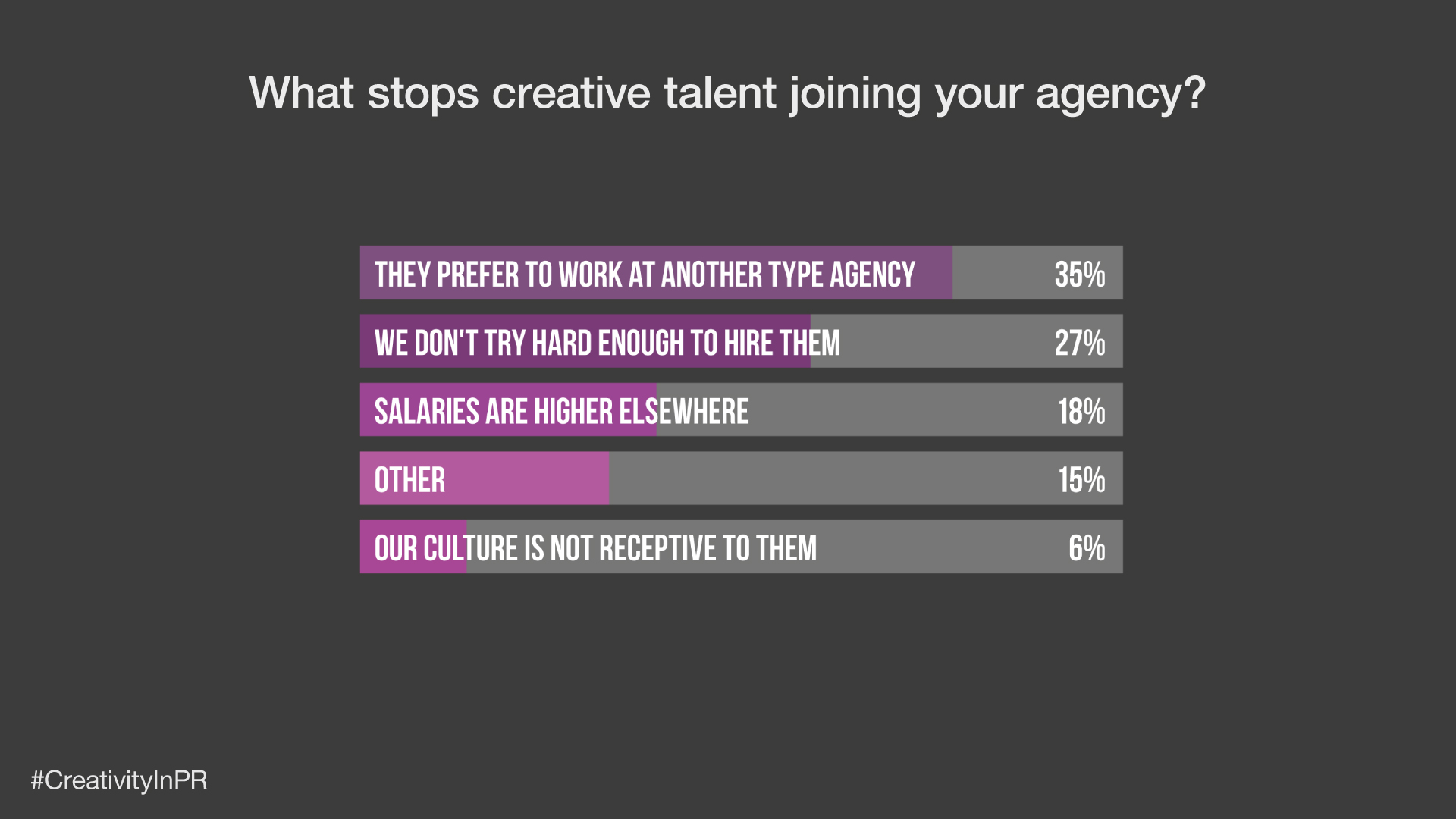 Another new question examined the types of creative talent that respondents believe their businesses need. The findings reveal that it is not so much the hands-on types that creative teams are crying out for, but big-thinkers to help them develop ideas and see them through 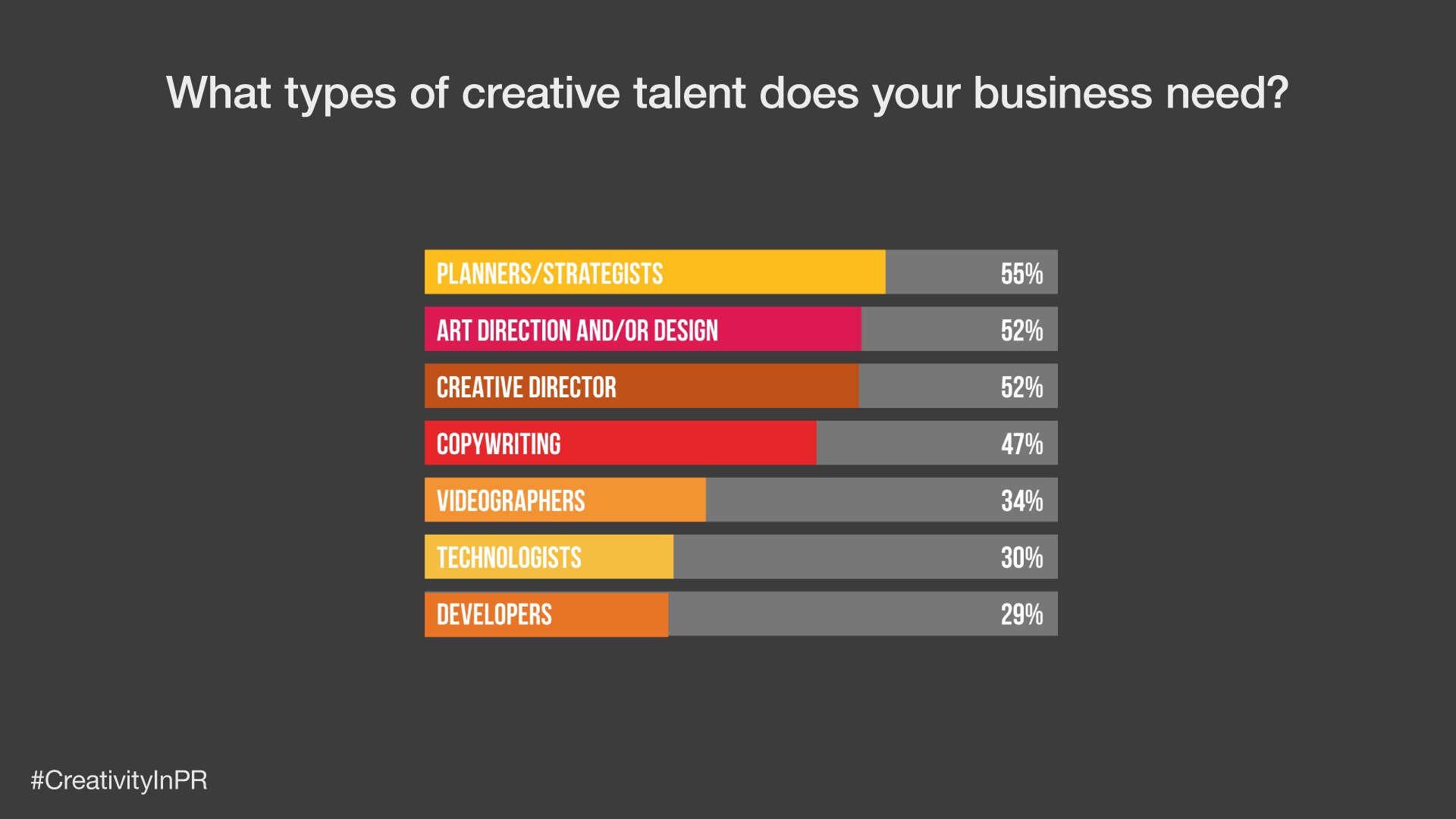 When asked to list the top sources of creative talent for their business, 25% pointed to adland, ahead of other non-PR agencies (23%). Only 15% find the creative talent they need at other PR firms, while 13% hire from in-house and 11% from digital media. 7% believe the best source of creative talent is outside the media and marketing world including ‘pop culture’, ‘writers, artists’, ‘freelancers’ and ‘organisations like YunoJuno and The Dots.’ 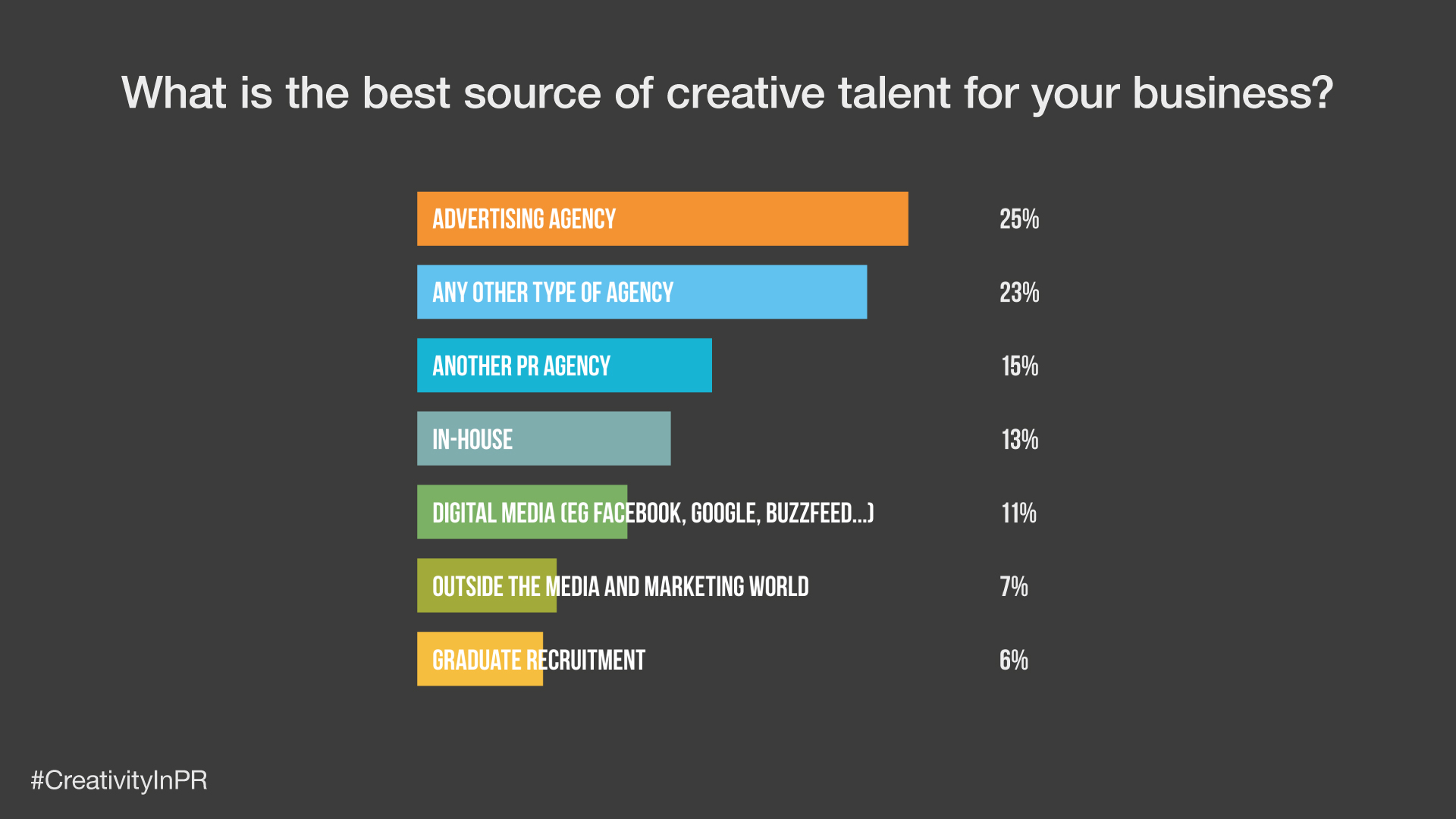 Given the fluidity of today's job positions, and the competing charms of other disciplines and industries, this year's survey attempted to address how well the industry is doing when it comes to retention. The results are mixed: 77% of firms believe they do an average or better job of ensuring their creatives don’t jump ship. Only 18% of respondents said they are doing an excellent job, however, suggesting that there is room for improvement. 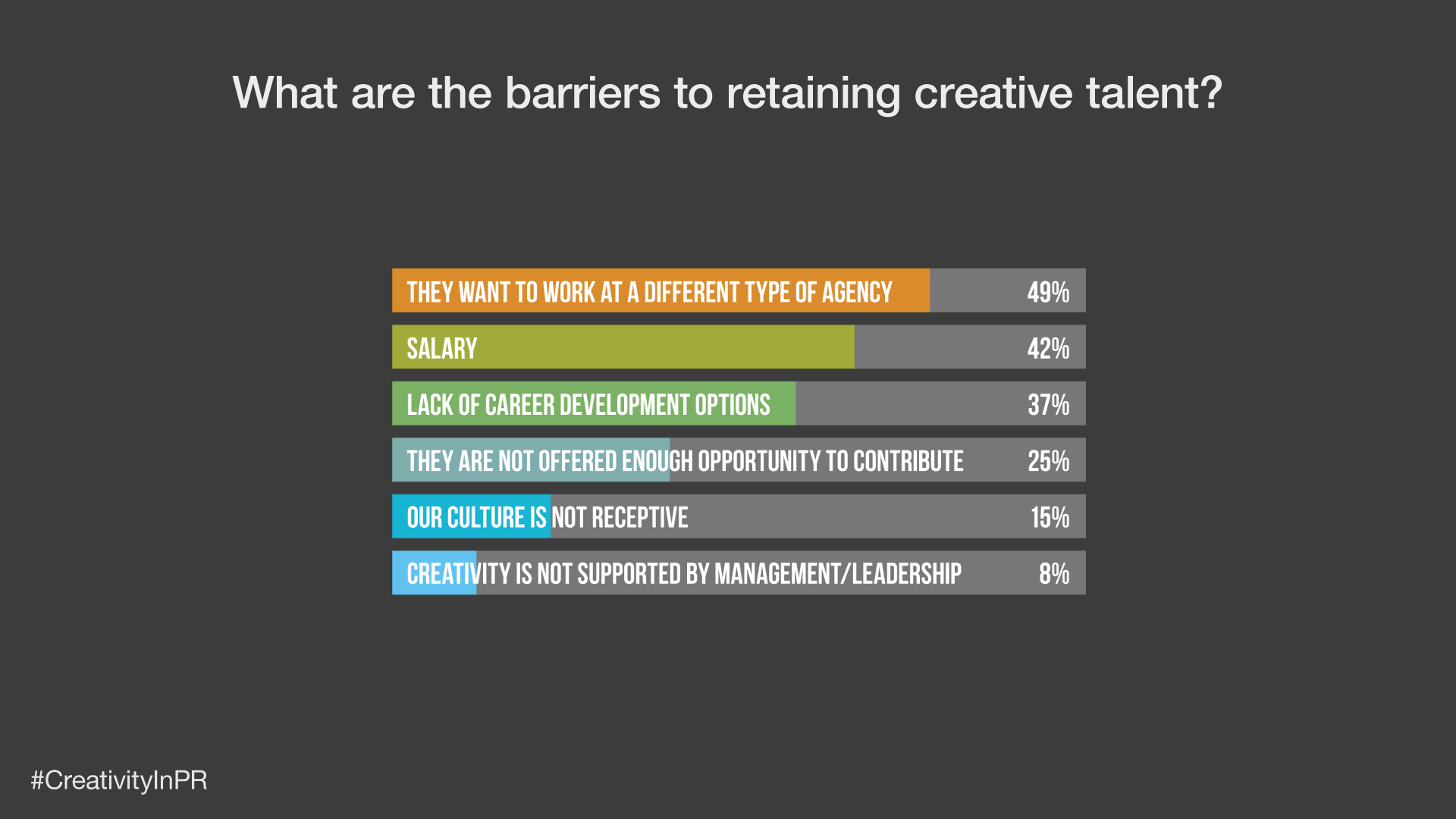 Meanwhile, when asked about barriers to retention, the most commonly cited factor is that creative talent want to work at another type of agency, ahead of salary and lack of career development options. This is clearly an area where the PR industry may need to up its game, perhaps — as Now Go Create founder Claire Bridges explains — by focusing on motivation and satisfaction.

There are an awful lot of people out there who are looking for the perfect outlet for what they do," said Bridges. "It’s not that employers don’t appreciate creativity, perhaps, it’s more a case of creativity is in no small part about out natural desire for the ‘new’ and to continue testing ourselves. Moving on can be a way to satisfy that need. To retain talent the freedom aspect of motivation is really important here – how and where to work and what projects to work on all play a part in satisfaction and productivity.”

Similarly, most respondents feel that their agency's HR practices — including remuneration, awards, appraisal and training — only do an average job of supporting creativity. 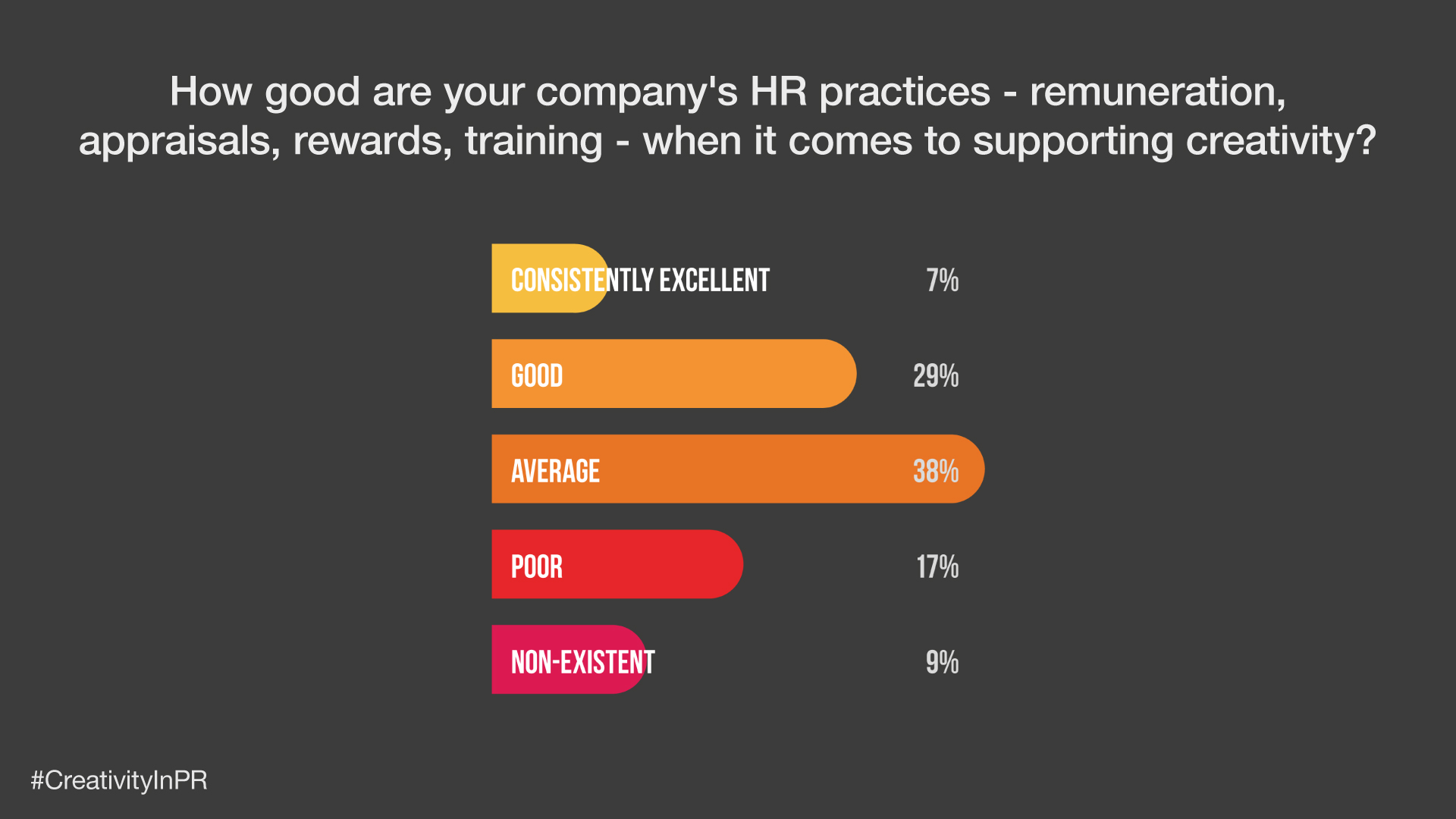 37% of this year’s agency respondents have a creative director in place at their firms, around the same as last year. There is a reasonable increase in those that are considering it (21%) and a corresponding drop in the proportion that believes the role is not necessary (30%).

Similarly encouraging is the proportion of creative directors in PR that are female. According to this year’s Creativity in PR study, that proportion has increased to 35% this year, compared to 25% last year. 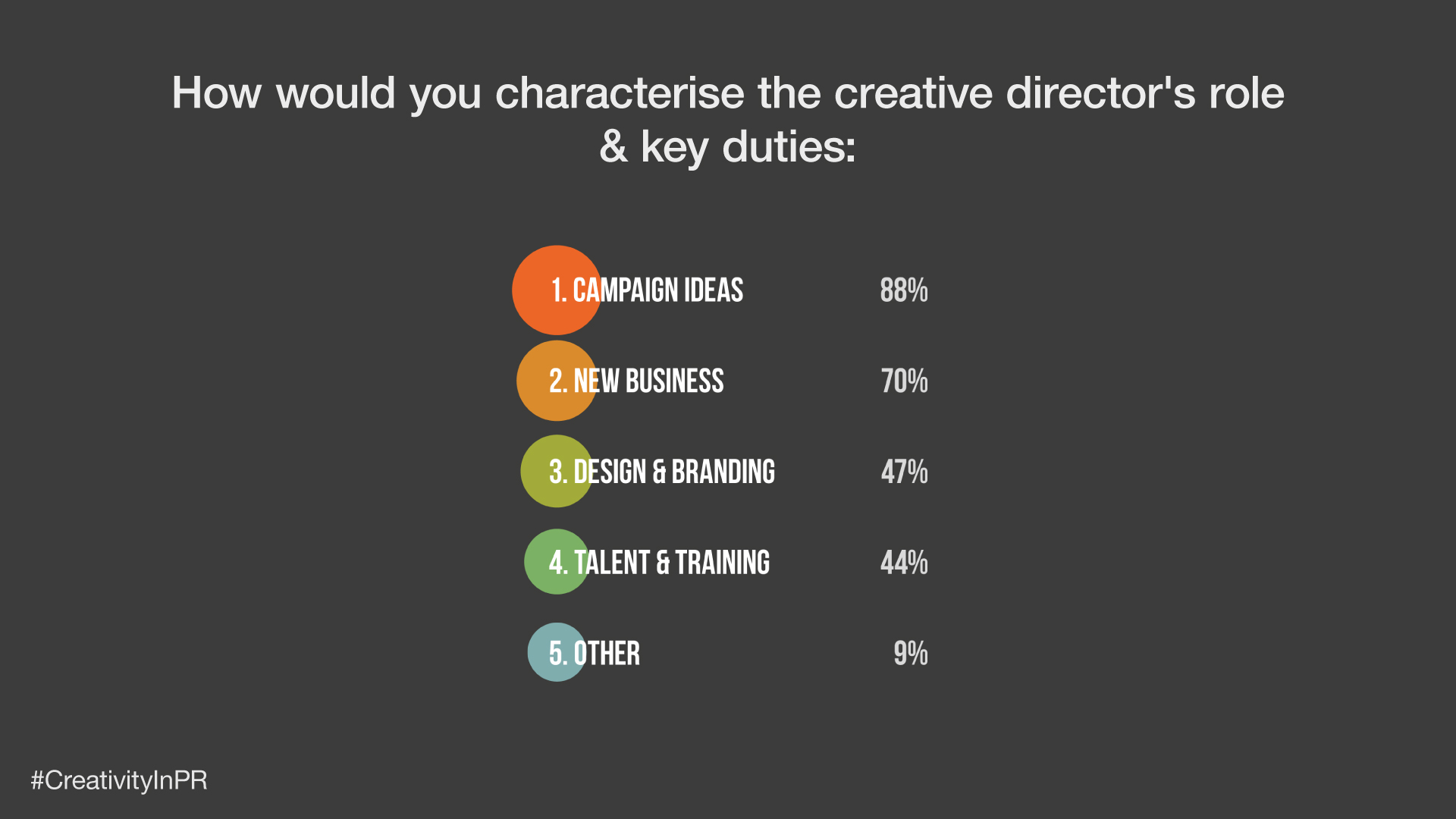 Considerable debate still persists about the exact role and responsibilities a creative director should fulfil within a public relations agency. When asked this question for the first time this year, respondents opted for campaign ideas first (88%), ahead of new business (70%) and design/branding (47%). Remarkably, talent and training ranked last(44%).