Please refer to our Privacy Policy for important information on the use of cookies. By continuing to use this website, you agree to this.
Home Research Edelman: 'Era Of Scepticism' Sees Trust In Business 'Evaporate'
Arun Sudhaman 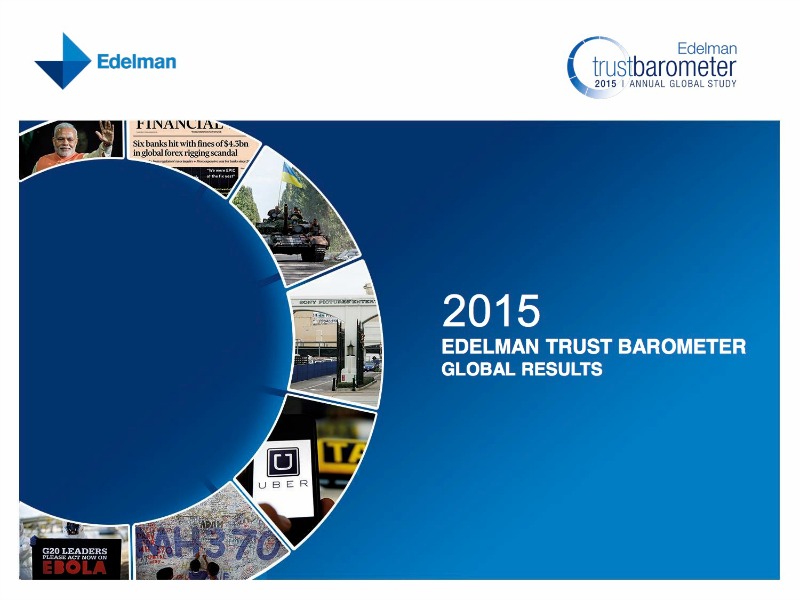 Edelman's 2015 Trust Barometer reveals a startling decrease in trust levels across all instutitions, causing the influential study to conclude that business, in particular, is suffering profound repercussions from a lack of genuine engagement.

The findings from the firm's 15th annual trust survey reveal that faith in institutions has dropped to their levels last seen during the global financial crisis. Trust in government, business, media and NGOs in the general population is below 50% in two-thirds of countries, including the US, UK, Germany and Japan.

The study polled 27,000 general population respondents with an oversample of 6,000 informed publics aged 25-64 across 27 countries.

For the first time, the survey investigated the link between trust and innovation, finding that general distrust of business is significantly affecting the acceptance of product innovation. In a blow to Silicon Valley's typical justification for technological advancements, only 24% of respondents see innovation as something that makes the world a better place.

Instead, a majority of respondents believe innovation is happening too quickly (51%) and that it is being driven by greed (67%) and business growth imperatives (66%). More than half (55%) feel business is not doing enough testing on new developments. Consumers also want stronger regulations of these innovations by a four-to-one margin, yet only 20% have confidence that government can do it effectively.

"The atmosphere of distrust is undermining innovation and the pace at which those innovations are moving to market is also confounding the level of trust in them," Edelman global corporate practice chair Ben Boyd told the Holmes Report.

Boyd admitted the findings had "big implications for Silicon Valley."

"We see the need for the Valley to contextualise," added Boyd. "Respondents want to see more transparency in the rigour of testing behind those innovations and they want more third party voices. Marketing campaigns are not sufficient."

Edelman CEO Richard Edelman added that "there must be a new compact between company and individual, where companies demonstrate that innovations are safe based on independent research, provide both societal and personal benefit and are transparent about the use of customer data."

The 2015 study also finds a strong correlation between a country’s trust level and its willingness to accept innovation. The United Arab Emirates, India and Indonesia, the top three countries on the trust index, are the most accepting of innovation. Conversely, several European nations including Germany, France and Spain, plus Japan and Korea, which are at the bottom of the trust index, are far less accepting of technological developments.

Trust levels also vary significantly based on the type of innovation. Trust is higher in developments in the technology industry, including electronic and mobile payments (69%) and personal health trackers (59%). However, innovations introduced in the energy and food sectors, such as hydraulic fracturing (47%) and genetically modified foods (32%), are viewed with far more skepticism.

This year also signaled the end of the recovery of trust in business, which declined in two-thirds of the markets and is now below 50% in 11 countries, the worst showing since 2008.

"The decline in trust in business is really the opportunity we presaged a couple of years ago," said Boyd. "That opportunity was not realised by business and we are seeing the repercussions of that lack of engagement."

The largest drops occurred in Canada (15 points to 47%), Germany (12 points to 45%), Australia (11 points to 48%) and Singapore (10 points to 61%). Even the once impenetrable technology industry saw declines in trust in most countries.

The decline in trust in the CEO as a credible spokesperson continued for the third consecutive year, with trust levels now at 31% in developed markets. Globally, CEOs (43%) and government officials (38%) continue to be the least credible sources, lagging far behind academic or industry experts (70%) and a person like yourself (63%).

"I don’t think they are understanding this finding in terms of findability and believability," explained Boyd. "The CEO and bully pulpit is not enough. If that’s not echoed by employees and then found on social through search and navigation, they are simply not managing the engagement ecosystem that is going be found and believed."