Please refer to our Privacy Policy for important information on the use of cookies. By continuing to use this website, you agree to this.
Home Research Middle East PR Industry Weighs Damage From Covid-19: Study 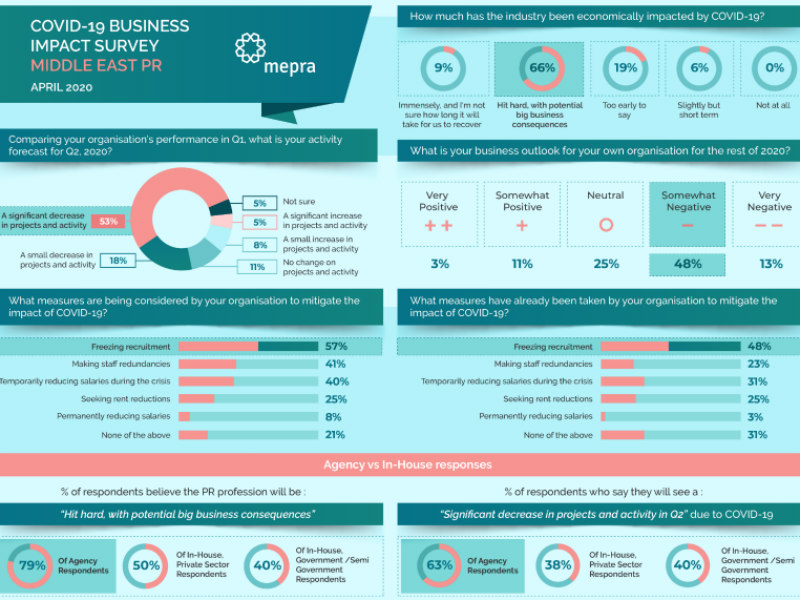 According to a MEPRA study, two-thirds of the region's relevant organizations believe the PR industry has been hit hard economically and faces major business consequences.

DUBAI — Two-thirds of Middle East PR organizations believe the industry has been hit hard economically by Covid-19 and faces major business consequences, while more than 60% have a negative outlook for their businesses, according to a new study from the Middle East Public Relations Association (MEPRA).

The survey of 72 organisations, which covered the agency, in-house and government sectors, found that 53% of respondents forecast a significant decrease in projects and activity for Q2 2020 with the impact being felt more strongly in agency. 63% of agency respondents reported a Q2 decline, compared to 38% of in-house private sector respondents and 40% of in-house government/semi-government respondents.

In response to the crisis, measures already taken by organisations to mitigate the impact of Covid-19 include freezing recruitment (48% of respondents), making staff redundancies (23%) and temporarily reducing salaries (31%).

A MEPRA spokesperson said “Although the survey revealed it is a distressing time for the majority of our industry, the responses allow all of us to have informed conversations about these issues as we move beyond it. The more informed we are, the better prepared we will be to get through these trying times."