Please refer to our Privacy Policy for important information on the use of cookies. By continuing to use this website, you agree to this.
Home Research Public Affairs Firms Optimistic About More Strategic Role 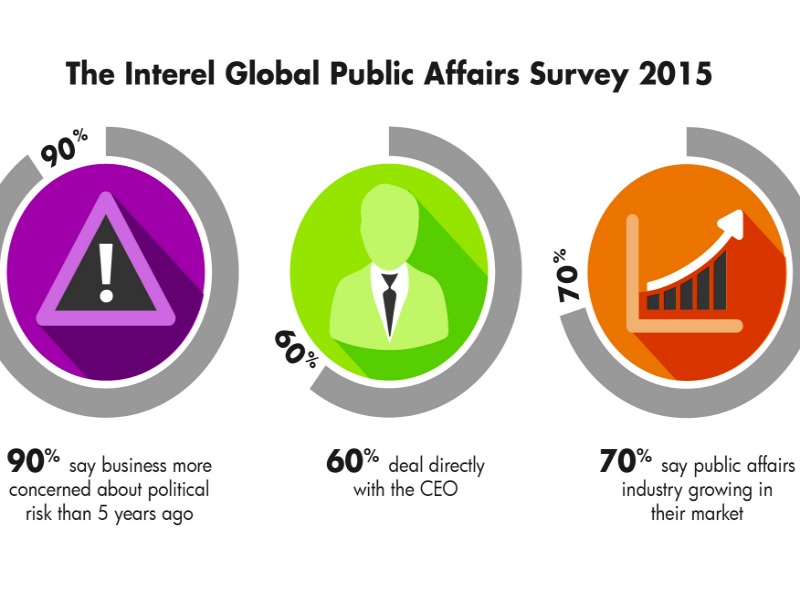 The status of the public affairs industry is growing and public affairs professionals are working higher up the decision-making chain, delivering more strategic advice and at a higher level.

The status of the public affairs industry is growing and public affairs professionals are working higher up the decision-making chain, delivering more strategic advice and at a higher level, according to the second annual Interel Public Affairs Survey of CEOs of independent public affairs consultancies in 50 countries.

For 83 percent, revenues increased during the last 12 months, and 58 percent expect this trend to continue. Energy, health, technology and food and drink are the highest growth areas for public affairs in 2015.

For 41 percent of respondents, providing strategic counsel is a key focus, after stakeholder engagement and issues monitoring and intelligence gathering.

Concern about the impact of political risk is the main reason businesses are seeking out strategic advice and support this year. More than 90 percent of respondents say that business is more concerned about political risk than it was five years ago.

There has also been a big change in perceptions about governments and their attitude towards business. In 2014, 62 percent of our respondents thought that governments were making it more difficult to do business. In 2015, this has fallen by almost half to just 33 percent.

Two-thirds (66 percent) of respondents saying that the industry is regulated or self-regulating, compared with 55 percent in 2014. Voluntary declarations of clients on a register have also increased from 8 percent to 28 percent, indicating greater transparency in lobbying—or at least a trend in that direction. This is also reflected in the fact that a growing number of respondents say that their senior counselor is a respected part of the client’s management team (75 percent in 2015 vs 68 percent in 2014).