Please refer to our Privacy Policy for important information on the use of cookies. By continuing to use this website, you agree to this.
Home Research The War For Ideas: Five Years Of The Creativity in PR Study 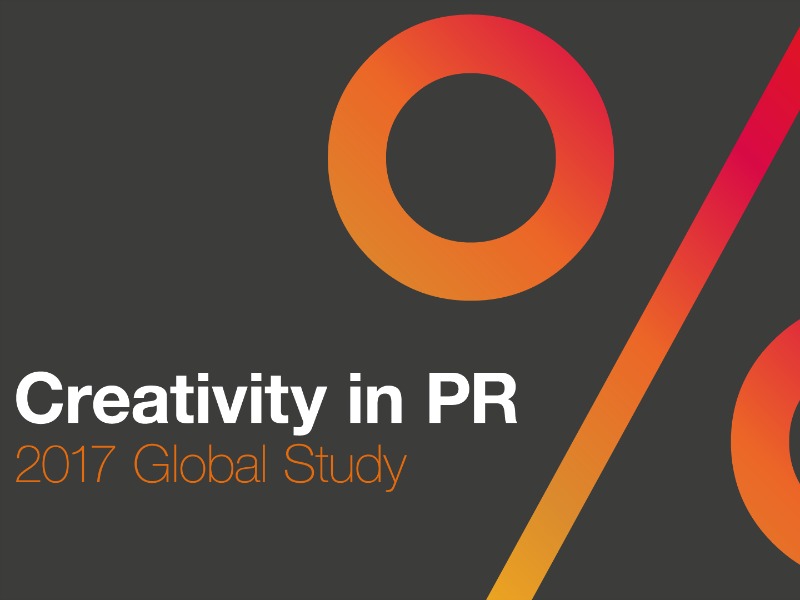 The War For Ideas: Five Years Of The Creativity in PR Study

Co-author Claire Bridges explores why findings from the landmark study have, alternately, surprised and encouraged us.

Five years ago the Holmes Report and Now Go Create set out to explore whether the public relations industry was truly creative enough to meet the demands of the 21st century. Last week I was asked to present a summary of the Creativity in PR study at the Euprera 2017 Congress and it was an interesting exercise to review the data from the past five years and to notice what’s changed, what’s the same and what the current challenges for the industry are.

There’s still time for you have your say in this year’s study here – which closes October 20.

Our findings since that first year have, alternately, surprised and encouraged us — often demonstrating a significant gap between rhetoric and reality, between an industry that often talks about creativity, but has found it more difficult to ensure that it is paying more than lip service to the notion.

For the Congress I summarised the headlines and key themes from each year, with a bit more focus on the most recent study results as the most relevant. What follows is my commentary to the presentation at Euprera that you can see here:


We started the study in 2012. I had left agency life after 20 years and after studying for my MSc in creativity, innovation and leadership I was interested to try and initiate some research into creativity in PR industry, it’s practices, the attitude and confidence of practitioners. Serendipitously the Holmes Report were planning to explore this topic and we decided to co-author the study, which is now in its sixth year, with the research out in the field for 2017 – you can still take part here.

We agreed that of all the buzzwords that litter the marketing communications industry, creativity is more elusive than most. Persistent overuse and empty application have conspired to rob it of all meaning, but the transformative impact of genuine business creativity has never been more important.

And creativity is notoriously tricky to define. When defining creativity in PR, what we’re really trying to define is how we measure the ideas we produce and implement for clients and stakeholders and the influence they have on business objectives. The academic audience were very interested in defining exactly what it is we are trying to measure and we know from all your anecdotal comments each year that you have strong opinions on this too! So two years ago we attempted to flesh what we mean by creativity in PR. It is:

Is the PR industry creative enough?  This was the question that we set out to answer through the first study in 2012.

The results came off a PR-battering at Cannes Lions with 61% of all respondents agreeing that criticism from judges at that year’s Festival was fair and that the PR industry was not delivering creative ideas. There was a sense of a slightly browbeaten industry suffering from a crisis of confidence.

It was clear then (and remains so) that in-house teams face different creative challenges from agencies – often small teams, repetitive problems, corporate risk-aversion, and multiple internal stakeholders to sell ideas to.

We noticed a simmering frustration running through the survey responses – along the lines of ‘we’re as good as any other part of the marketing mix – why are we not recognized for our creative chops?’

How would you describe the quality of creativity in the PR industry?

2013’s headlines revealed that creativity was becoming an increasingly critical element in how businesses perceive PR value. In-house respondents were asked how important creativity was to their decisions to hire and retain an agency. The results showed the premium that businesses were placing on creativity in PR, with more than three-quarters (79%) rating it as 8 or higher out of 10, compared to two-thirds in 2012.

Almost half (47%) scored it as 9 or more, while more than one in five (22%) gave it full marks for importance, both significant increases on the 2012 results. The findings belied the notion that creativity in PR is a luxury. Instead they demonstrated, the indelible importance attached to creativity by in-house marketers and communications as a genuine business priority.

In 2014 our headlines were that creativity in PR was on the rise despite client concerns. 49% of respondents said that the quality of creativity in PR campaigns had improved over the past year, a significant increase on the previous year, when 61% disagreed with this contention. 72% said they had a creative process in their business, another improvement on 2013.

Creative director hires were up by 10% since 2012 to 42%. But PR agencies ranked behind ad and digital agencies when clients weighed them according to creative quality.

This was the year of encouraging signs that the industry was embracing process and investing in creativity in PR. However client feedback or risk aversion' came out on top in this year as the biggest barrier to creativity, overtaking a lack of budget and time.

2014’s results continued to build sense of change and possibility we saw in 2013, and the call for a new business model. We did deep dive interviews with agency heads and creative leads and Jackie Cooper’s quote reflects the need for the industry to evaluate how creativity is integrated and built into the DNA of the business, a still relevant question.

“We are building a new planet. Taking the best of the ad agencies and their process (and their staff!) and the best of the PR account teams (and their business nous and media specialism) and creating shareable, earnable ideas with strong creative teams.” Jackie Cooper, Edelman

In 2015 our headline finding reflected the industry embracing its creative role as client demands rise.

In 2016 we asked a new question about what is stopping PR firms from taking on lead creative duties?

Significantly, both agencies and clients point to in-house structures being the key stumbling block. After in house structures both sides rank PR agency creative and strategic quality second and third, respectively, suggesting that agencies cannot get off the hook that easily.

This is not just evident from the campaigns that we see winning in major award shows across the globe, but also in the practices and processes that are ensuring that creativity is viewed as a central element in organisational culture, rather than being viewed solely in terms of creative output.

The 2016 results show that people who work in PR feel more confident about their abilities than in any of our previous surveys.

So over the past five years what’s changed?

2. The Creative Director role is now well established (40% have one)

4. Creative confidence is high leading to brave, impactful work that cuts through

5. Competition is fiercer than ever

And what’s the same?

1. Critical areas of the creative process are still lacking rigour (4/10 agencies still not applying any process to evaluate their ideas)

3. Focus on creativity but lack of innovation

4. Diversity of thought - the industry is not meeting the challenge

The Holmes Report has written about the fact that the PR industry and its leaders are clearly aware of the work they must do to create agencies that better reflect the diversity of the societies in which they operate. Creativity thrives on diversity of thought.

Some of the questions this raises for the PR industry moving forward: