What Does The PR Professional Of The Future Look Like?

In recent weeks, I have been lucky enough to have had a number of enlightening conversations with PR firms from around the world, in the course of presenting our always-popular analysis of the PR agency of the future.

It's a theme that remains as important as ever for the PR industry, as it grapples with unprecedented change and figures out how to evolve its model and structure to play a more central brand-building role in today's converged media environment.

Unsurprisingly, the key concern that repeatedly arises over the course of these discussions is talent — not least because of the influx of new skills into the PR agency, and the need to provide viable career paths for people whose destiny is not to run a P&L or an office. Hence, of course, the restructuring of agency models around more specialist areas (without underplaying the importance of the new-age generalist).

But what are the skills that will define the PR professional of the future? It's a question I am often asked, so in turn we asked the industry during our definitive World PR Report research study this year with ICCO. And here are the results: 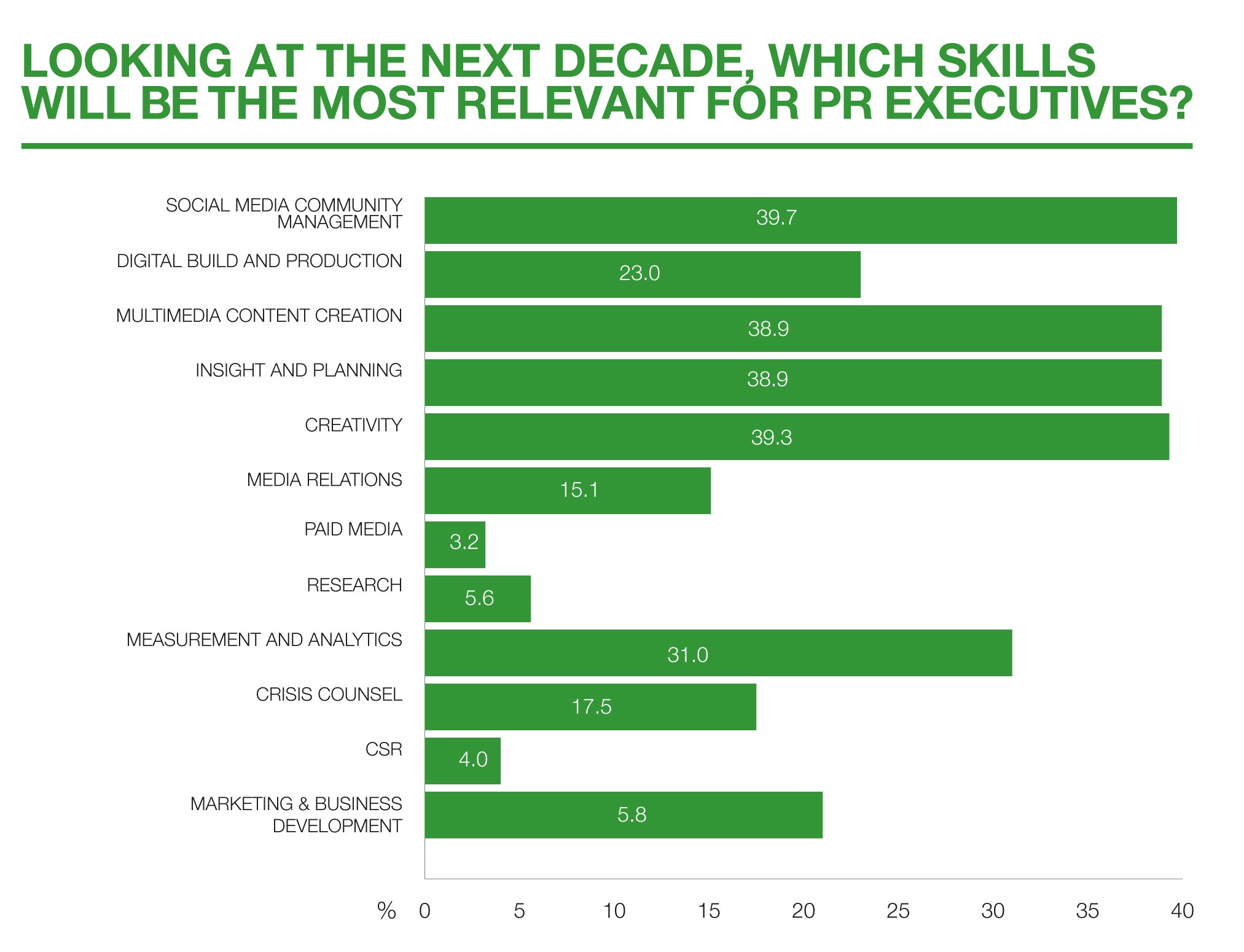 Talent remains the biggest challenge facing the global PR industry, and a look at the skills that are rated as most important over the next decade perhaps explains why. Creativity, multimedia content and insight/planning all score highly — all of which are areas where the PR industry has, frankly, struggled to build critical mass in terms of capability.

Our landmark Creativity in PR study, the fourth edition of which will begin surveying the industry after Cannes, reveals that the PR world's efforts to build a develop a more creative mindset remains a work in progress. Hiring for planners, meanwhile, has proceeded in fits and starts, perhaps because 'PR planners' cannot simply be reproduced from their advertising brethren. And multimedia content creators are prized by all types of agencies and in-house marketing and communications departments.

Deploying all of these types of people within the classic PR agency structure, furthermore, not only requires adjustments in terms of job roles, but also in terms of cultural expectations and revenue models.

If there is a surprise, it is that social media community management, which has migrated in-house as it becomes a more commoditised service, ranks at the top of the list. Paid media and research also score poorly, but it is encouraging that measurement/analytics appears to be appropriately valued.

Diving deeper into the regional variations in results sheds further insight. In the US, multimedia content creation (42%) comes out on top, while Asia-Pacific firms favour insight and planning (49%). Creativity is seen as much less important (28%) in the latter region, but is considerably more highly prized in the UK (44%) and Eastern Europe (42%).

Across the world, however, one thing remains more or less constant. Media relations skills (15%) are not seen as particularly relevant. That should cause a measure of trepidation among the older generation of PR industry executives. Such is the nature of change.

Covid-19: What It Means For Financial Services PR

Comparisons to the global economic crisis of a year ago abound. But this time, the financial service ...