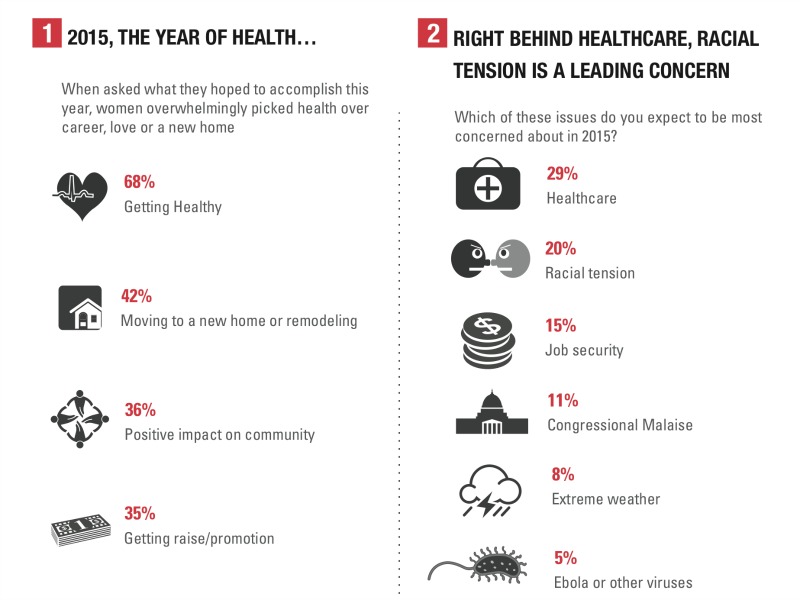 Health tops the list of women’s concerns—political and personal—heading into 2015, with 29 percent identifying healthcare as their number one issue.

Health tops the list of women’s concerns—political and personal—heading into 2015, with 29 percent identifying healthcare as the number one issue they expect to deal with in the year ahead (beating out racial tension, mentioned by 20 percent of respondents, and job security, at 15 percent). And when asked about the top personal goal for 2015, 69 percent were focused on getting healthy, according to the Women Predict 2015 survey, released by Lippe Taylor and online community SheSpeaks.

The survey found that women have a wide range of political and social concerns going into 2015, with healthcare, racial tension and job security at the top of the list, but with significant numbers worrying about Congressional malaise (11 percent) and extreme weather (8 percent), overshadowing concerns of Ebola/other viruses (5 percent), cyber bullying (3 percent) and domestic violence (2 percent).

When it comes to their disposable income, 28 percent of women say they'll spend it on travel, ahead of categories such as fashion (16 percent), beauty (14 percent) and investments (10 percent). And 20 percent say they will make more purchases using their mobile phone than in 2014: with likely purchases including clothing (30 percent), beauty products (29 percent) and downloadable music (28 percent).

Many of them (38 percent) will be buying a new smart phone to do all that shopping, while 26 percent expect to buy a new tablet, and 21 percent anticipate trying out wearable technology.

Almost 70 percent of women polled say that "getting healthy" is their top goal for 2015, followed by getting a raise/promotion (35 percent), making a positive impact on their community (36 percent), moving to a new home or remodeling a current one (42 percent), and meeting a new love interest (12 percent).

About three-quarters (73 percent) of women will keep themselves happy and balanced by spending time with family, followed by doing little things for themselves throughout the year (72 percent), exercising (64 percent), having quiet/meditation time (50 percent) and spending quality time with friends (50 percent).