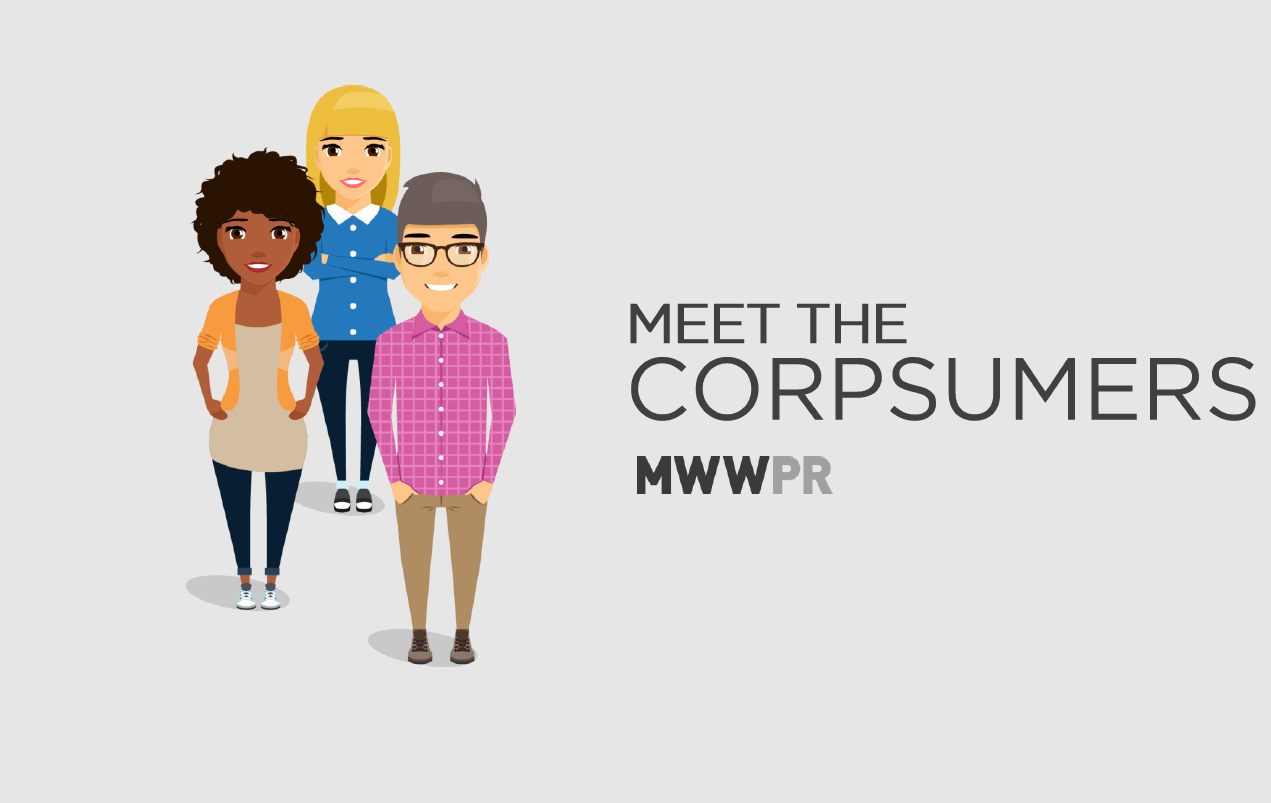 Part advocate and part objector, CorpSumers are the “influencers next door” whose brand activism changes the opinions and behaviors of their friends and families.

MWWPR identified a significant, growing segment of the population that is critical to brands across all industries. This segment was identified through primary research commissioned by MWWPR and conducted by Wakefield Research demonstrating that nearly 100 million Americans look to corporate reputation to determine not only the products they buy but also the companies they invest in, do business with and work for.This segment, called the CorpSumer™, represents one in three Americans who have a demonstrated track record of basing their behaviors on corporate reputation rather than just product features, attributes and price. More than just saying that company reputation is important (like 75 percent of Americans), the CorpSumers act on it. They go beyond brand advocacy to brand activism, whether for you, or against.

The CorpSumer segment is significant from a simple sales and market share perspective, but their true value is in their influence of others and their ability to make change, move attitudes and markets.  Part advocate and part objector, CorpSumers are the “influencers next door” whose brand activism changes the opinions and behaviors of their friends and families.

More than half of CorpSumers regularly use their social media channels to share their opinions about news, current events, and cultural issues including companies and brands several times a week. Most striking was the loyalty of the CorpSumer to companies that they believe in – more than half (51 percent) will stick with a product that has disappointed them because they believe in the company or share its values.

As companies struggle to understand the lifetime value of a customer, there is an increasing body of evidence that customers become increasingly valuable over time, and pay their highest dividend when they become evangelists and advocates.  According to Harvard Business School Press a 12 percent increase in advocacy represents a 200 percent increase in revenue growth, making the CorpSumer one of the highest value-generating segments.Advocates spend 2x more than average customers on favorite brands (JitBit), accounting for $6 trillion in annual spending and a loyal customer is worth up to 10x the value of their first purchase, making the loyalty and activism of the Corpsumer a powerful combination to fuel growth for brands.

CorpSumers are a larger target audience than millennials, Moms, and many other segments that brands are targeting today.  Demographically, CorpSumers cross the boundaries of both gender and generation, and they hit the sweet spot for brands on income, education and family status.  They are more likely than the average American to be well-educated, employed full time, high income earners and parents.  From a psychographic perspective, CorpSumers are optimistic and highly engaged. They are interested in knowing about companies and believe they are positive change agents.    In fact, 53 percent say that a company has a greater ability to make positive change in the world than government.

CorpSumers report that their interest in a company’s reputation and values guide their decision making across all sectors and industries, and demonstrated significant reliance on their view of the entire company when making decisions about automobiles, financial services, healthcare and food – both for in home consumption and dining out.  In these sectors, more than 75-85 percent cite the importance of corporate reputation to their behaviors and choices.

CorpSumer engagement with a company pays dividends in the areas of pricing, loyalty and evangelism.  Sixty-seven percent of CorpSumers are willing to pay full price for a product when they believe in the company, particularly if the company shares their personal values or supports issues that are important to them.  And half of CorpSumers report a track record of sticking with products that have disappointed them because they supported other things a company does.  Eighty-nine percent of CorpSumers are likely to share positive news about companies, but 78 percent are also likely to share negative news about companies and they are eager to encourage or dissuade their peers from supporting a brand.