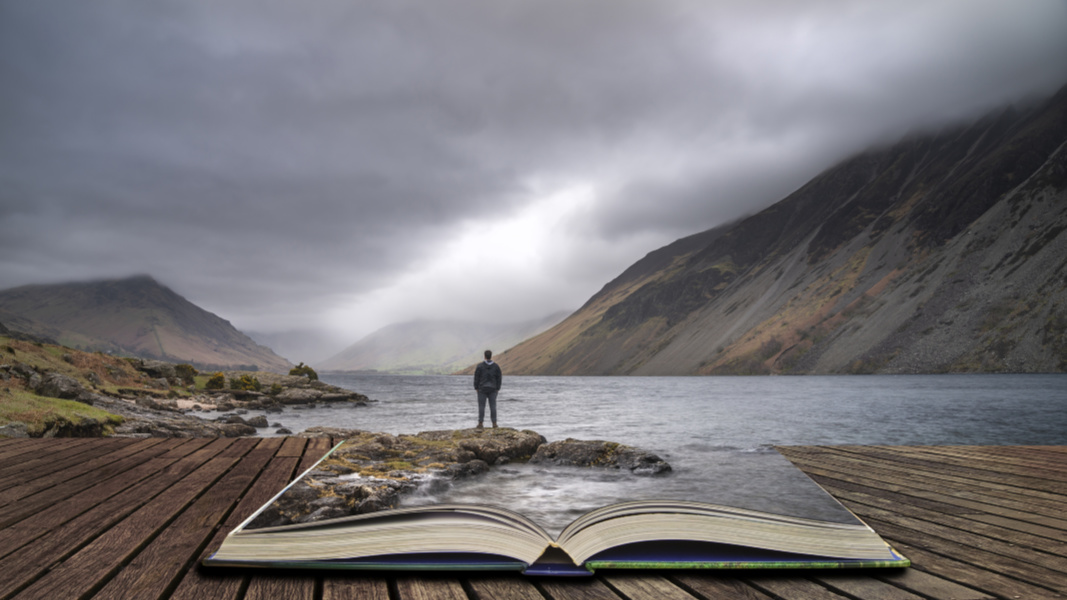 The Evolution And Future Of Storytelling


The story is one of our oldest technologies. It’s a communications technology, one that crucially places events in a comprehensible order: beginning, middle, and end. Our oldest stories, the Lascaux cave paintings, are estimated to be approximately thirty thousand years old. They depict a very simple narrative: the successful hunting of animals. Thirty thousand years ago, the most effective and safest mechanism for obtaining nourishment was on par with industry trade secrets today. The innovation of having a series of paintings to refer back to—the slide deck of our ancestors—was but an act of self-preservation. Stories kept communities alive.

Stories also created and expanded communities. In ancient Greece, the Homeric tradition of oral storytelling created narratives that established Greek identity. The Iliad and The Odyssey are full of details not just about warfare and conquest, but cultural lessons about how to sacrifice animals to the gods, how to conduct an appropriate funeral, and the importance of marriage and family. Because the stories were performed by itinerant poets, they helped spread that knowledge beyond the borders of Greece.

This is still true thirty thousand years later. In 2020, we are more obsessed with stories than ever. Just ask Disney, HBO, or novelists like myself. Although stories now fly further and faster than Homer could have ever imagined (we also now operate on glass tablets, not those made of stone), they still inspire us. We live in an era of endless reboots, prequels and sequels, and transmedia storytelling that unfolds across platforms and screens. The character of Batman is now older than the oldest candidate for President, and Mickey Mouse is even older than that. Their brands will in all likelihood last longer than the memory of some administrations. Whereas stories once kept communities alive in the literal sense, they now keep communities alive in the memetic sense, extending the lifespan of everything from political parties to fandoms.

Granted, anyone who has spent much time in the fields of marketing, strategy, or communications knows the power of storytelling. But it’s important to remember that the trends we see emerging in the field of storytelling and narrative are just the latest iterations in trends that have consumed humanity from its earliest roots. They may feel new, and even strange, but so did the printing press. At the invention of the printed novel, a keen interest in reading—especially when done by women—was considered a mental illness. Deep pockets were cut from women’s dresses as a way to keep them from carrying broadsheets, periodicals, and political literature like pamphlets and cartoons—the memes of their day. (Women face the same problem today: phones are getting bigger, yet pockets remain decorative.)

So what does this all mean in a narrative landscape transformed by artificial intelligence, algorithms, and other emerging technological innovations? Once upon a time, itinerant poets asked the Muses to inspire them as they recited the epics. What happens when those Muses are programmable?

First, “viral” storytelling isn’t as seductive a proposition as it used to be. Any story—be it a brand narrative or a tentpole blockbuster—that is enjoyed by “everyone” is going to have certain limits, and may even be a bit boring, or at least formulaic. (The last blockbuster you saw probably didn’t have an R rating. It was probably a nostalgia piece that rehashed a story you already knew involving well-known heroes and villains.) Second, viral reach doesn’t mean the same thing that it used to.

Consider Peloton’s recent Christmas ad, which depicted a husband buying the glitzy bike for his wife. The ad was compared to everything from pornography to a hostage video, and within days it became the framing device for a counter ad by Ryan Reynolds’ Aviation Gin. In it, the same performer (Monica Ruiz) from the Peloton ad sits at a bar with her friends, downing martinis with a blank stare, as though finally having escaped the confines of her marriage. Is this good attention for Peloton? No, not really. The brand is now “that weird bike that Deadpool made fun of.” The mechanics of how that happened (were there any women at all in that pitch meeting?) are less important than what it proves: twenty years ago, any brand would have killed for that publicity. Now, it’s a double-edged sword.

What’s safer, and what actually builds an audience and a brand, is finding a relatable niche and telling a story from there. Currently, that means relying on micro-influencers, people just on the cusp of celebrity who haven’t had their first major publicity crisis. This mirrors the success of regional influencers in the days of radio: announcers, hosts, and DJs with hyperlocal knowledge of a community could interpret and apply larger global trends for their audiences in a relevant and meaningful way while also guiding them through global crises like the Depression and World War II.


By 2050, climate change and changes to broadband networks may return us to a similar media landscape, in which regional influencers mean more to a local community than global celebrities do. After all, who would you rather listen to when it comes to, say, homebuilding trends: someone who had survived the same wildfires you had, or someone three thousand miles away facing a hurricane you’ve never experienced?

This opens room for “artificial” or “synthetic” influencers and brand personae cobbled together from data lakes, algorithms, and AI. Algorithms are increasingly the buffer between major corporations and their customers, whether we’re talking about credit ratings and movie recommendations, or customer assistance.


That trend will only continue as weak AI becomes cheaper and more accessible to smaller companies that can pay a license fee to fine-tune the experience for their customers. In a few years, human interaction will be an even greater signifier of luxury than it is now. On the other end of the spectrum will be the granddaughters of AI and virtual influencers like Lil Miquela—everything from personal shoppers to therapists to financial advisors who have imprinted on whatever data that increasingly-ambient surveillance has provided them.

This aggressive automated catering will only perpetuate an empathy shortage. We’re approaching a point at which automation, curation, emotional computing, and invisible interfaces will create the experience of magic—every home a castle, every castle enchanted by synthetic ghosts. This pervasive comfort and easy isolation threaten to even further alienate whole segments of society from each other.


It also divorces beneficiaries of these technologies from the experience of hardship, especially crucial at the same time climate change is guaranteed to increase starvation, disease, war, and poverty for everyone else. Given how social media and infotainment have filled the void that might otherwise be an opportunity for personal reflection, might we be approaching “peak empathy” as we approach peak oil?

This article is part of a series exploring the topic of innovation in partnership with the Bulleit Group. You can read more from the series here.