The Most Engaged Election Coverage, Week of October 5

We’re back for another weekly look at the top stories and social posts about the election.

We’re back for another weekly look at the top stories and social posts about the election. This week there has been a president admitted to hospital, a vice-presidential debate, and a plot to kidnap a governor, so there is plenty to analyze.

The top article was unsurprisingly about the president and his wife testing positive for COVID-19. Because of the nature of when this report is written, this week’s post does not capture some of the very early reporting from Bloomberg and others, as it was published outside of the timeframe we are looking at. There are, however, still five articles that relate to Trump’s illness in the top ten politics stories from the last week, with the most engaged coming from conservative media outlet The Blaze. 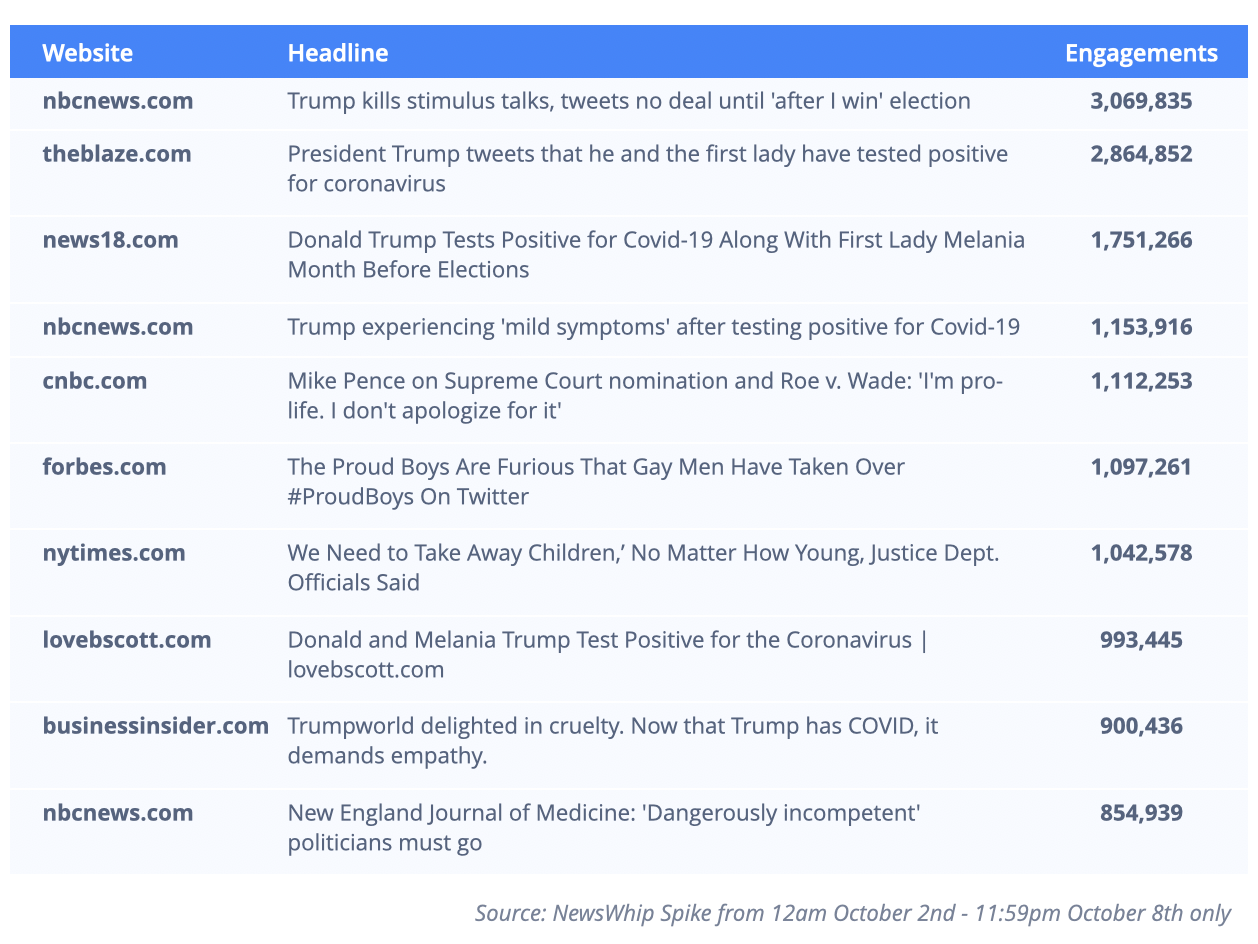 It was not the top story overall, however, with a piece from NBC News on President Trump’s tweet telling Republicans to abandon stimulus talks until after the election being the most engaged story of all in the last week.

Since five of the top ten articles were about or related to Trump’s COVID diagnosis, the picture shifts quite substantially if we limit it to just one story per narrative. 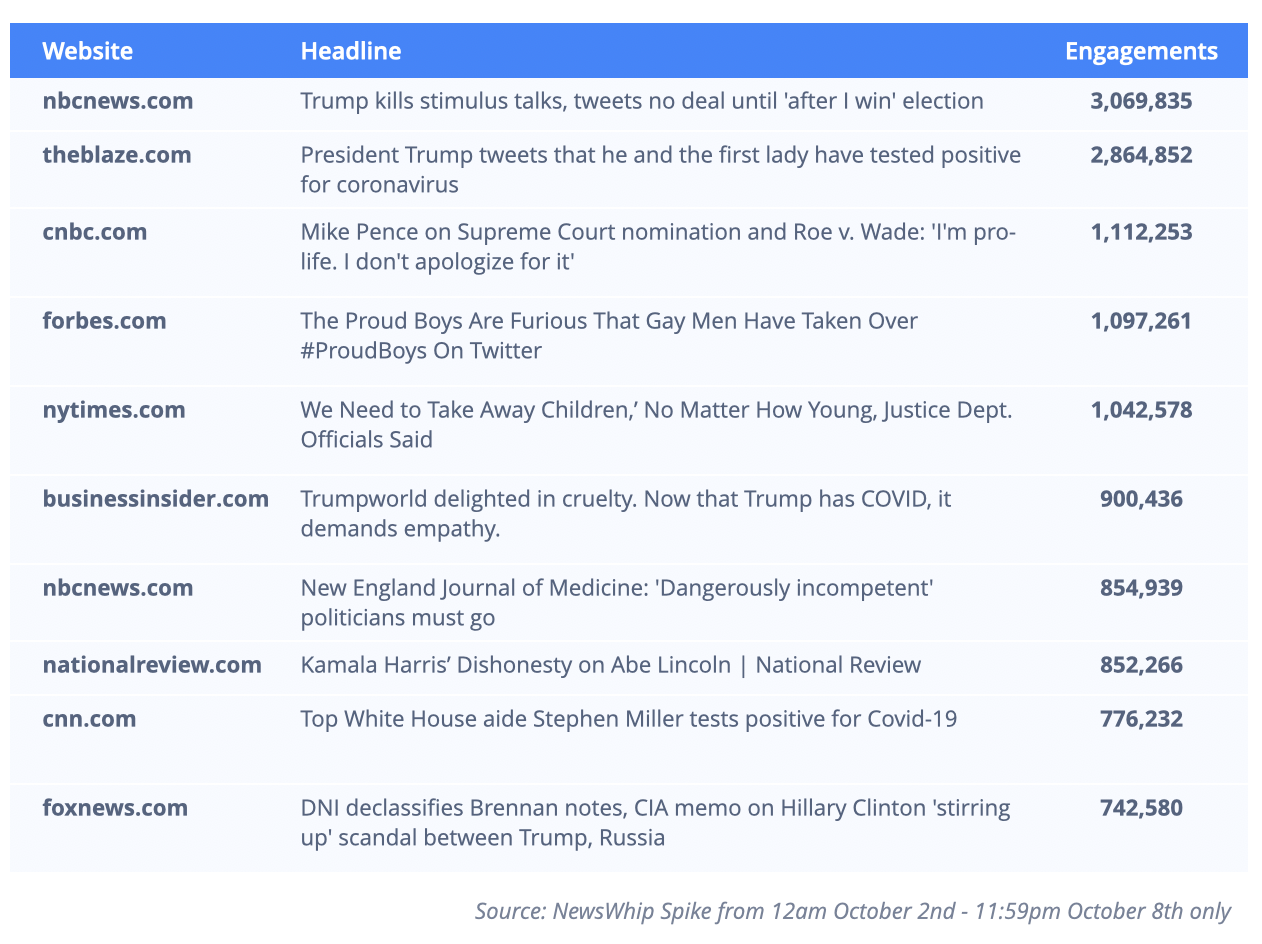 There is a much bigger focus on politics more broadly when we look at it in this view. The stimulus talks and The Blaze’s piece remain the top two articles, of course, but other narratives included Mike Pence’s anti-abortion stance, a campaign to reclaim the term ‘Proud Boys’ on Twitter, and Justice Department officials talking about family separation.

There was very little coverage of the vice-presidential debate that went viral, with only one piece making the top ten, from the National Review, though much fun was had at the fly that landed on Mike Pence’s head, with a piece in the New York Times receiving more than 100k engagements.

The news of the plot to kidnap the Michigan governor Grethcen Whitmer fell just outside the ten most engaged narratives, with around 730k interactions.

The top five Facebook political posts of the past week were all from President Trump or Barack Obama, as the current and former president continue to wield huge influence on the platform.

President Trump had the top post of the last week, in which he posted an update that he thought he was doing well in his fight against COVID. The post received more than three million engagements. The other two best performing posts for the president were to thank the staff at Walter Reed and claim that Mike Pence came out on top in the VP debate, which received 1.9 million and 1.6 million engagements respectively.

Barack Obama also had two posts in the top five for the last week. The more engaged of these received 1.8 million engagements, and was a post to wish his wife Michelle a happy anniversary in which he encouraged his followers to help people to vote as an anniversary gift to them. A post wishing Donald Trump and the First Lady well in their recovery also made the top five, and received 1.7 million engagements.

The top posts on Twitter were again more varied than they were on Facebook, though not by as much this time. Three of the top tweets came from Joe Biden.

The most engaged tweet came from actor Curtis Armstrong, whose father died of COVID-19. He resented the move on Donald Trump’s part to go out in a car and greet supporters outside Walter Reed, saying it endangered the lives of the Secret Service members in the car with him.

Donald Trump’s cross-post of the same text that he was doing well that garnered three million engagements on Facebook was also his top-performing post on Twitter, though with fewer engagements. On Twitter it received around 1.36 million likes and retweets.

Joe Biden had the other three top tweets, with an encouragement for Americans to focus on the election with less than a month to go, a congratulatory tweet for Kamala Harris after the debate, and a joke capitalizing on the appearance of the fly in the debate being his top performers.

Reddit is again very different from the previous two social networks, being more focused on discussion.

The top posts tended to highlight how the pandemic has been affecting the election.

The top three posts all focused on Donald Trump’s illness in some way, with posts in r/news, r/gifs, and r/pics discussing the news in different ways.

The fifth highest scoring post was about Joe Biden, whose wife Jill pulled him back a few steps when he was standing too close to reporters.

One post that was not about either candidate specifically focused on 102-year-old Beatrice Lumpkin getting dressed up in protective gear so that she could vote. The post noted that when she was born, women still did not have the right to vote in America.