Please refer to our Privacy Policy for important information on the use of cookies. By continuing to use this website, you agree to this.
Home Latest Podcast: Breaking Through the B2B Thought Leadership Noise 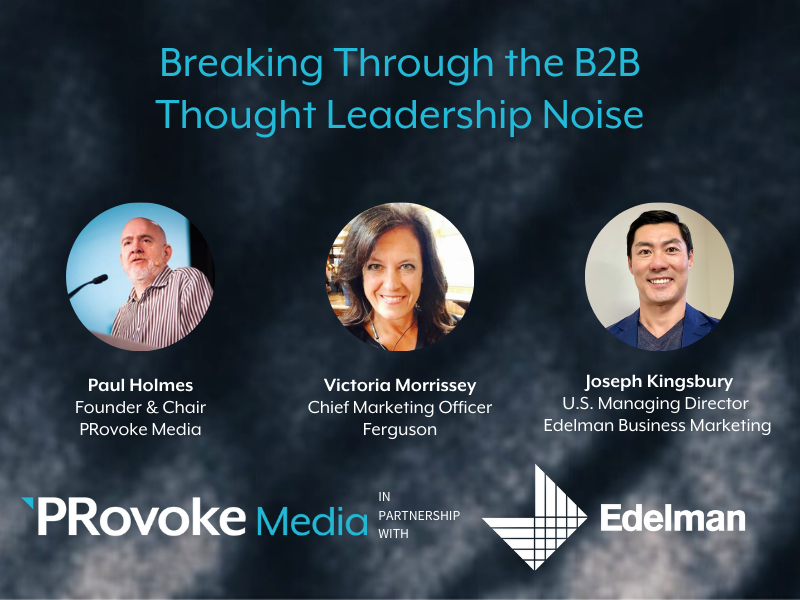 In this episode of the PRovoke Media Podcast, Paul Holmes is joined by Edelman’s US Managing Director of Business Marketing, Joseph Kingsbury, along with Victoria Morrissey, who is the chief marketing officer at Ferguson. The three gather to discuss thought leadership in the B2B marketing space, as well as the findings of a new Edelman/LinkedIn impact study conducted on the subject.

The research was driven by Edelman’s desire to better understand the business impact of thought leadership on clients’ reputations. Does it drive demand for business? Does it move them into new sectors? Since partnering with LinkedIn five years ago, the findings have highlighted just how large that impact actually is.

The study also explores other aspects of impact which the guests discuss with Holmes, including when it is good for companies to speak out on controversial issues, identifying when consumers expect companies to weigh in, and when it is better to refrain. Morrissey notes that Ferguson benefits from being selective in choosing which issues to get involved in publicly; being very deliberate about where Ferguson’s voice is heard makes it all the more impactful.

Kingsbury echoes Morrissey’s belief in the importance of recognizing when to speak out and when to step back, citing findings from the report. “What we found was that nearly half of global B2B buyers said that the thought leadership that is aimed at them, that what they’re consuming, does not even seem to be created with their needs in mind," he says.

Kingsbury and Morrissey talk about the tangible ways places like Ferguson are managing that brand messaging from the inside out to reduce that discontent. One of the most important steps is educating departments that haven’t traditionally thought about customer needs to shift messaging from something that resonates with that employee, to something that resonates with a prospective customer.

Other subjects raised in the discussion include the role of action within DE&I initiatives, employee education, and identifying a company’s purpose.

6:07 Thought Leadership Beyond The Top Funnel

19:45 The Power of Storytelling

22:47 Building Up Employees to Be Trusted Partners