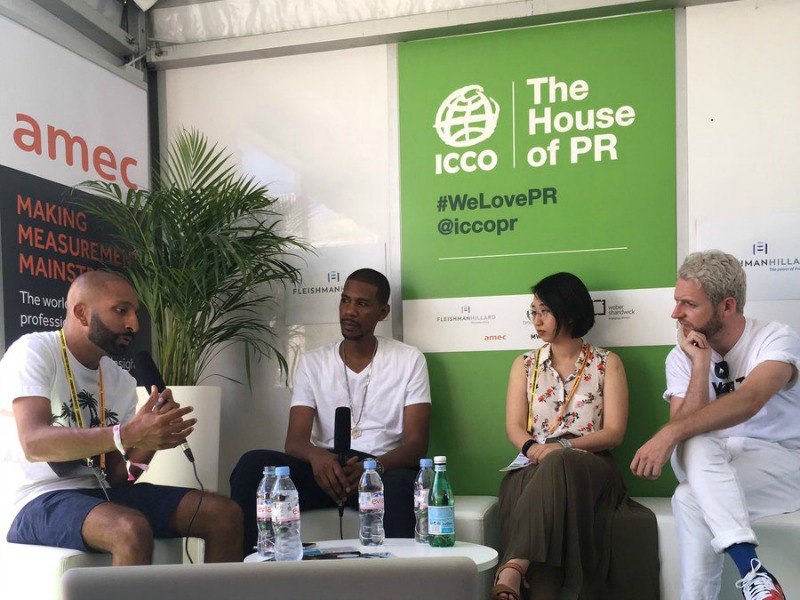 Hip-hop producer Young Guru thinks brands are still getting it wrong when it comes to tapping into music.

CANNES — Brands are still getting it wrong when it comes to collaborating with musicians, said Grammy nominated hip-hop engineer and producer Young Guru at a panel in Cannes this week.

The session, entitled 'Talking Tunes and Human Truth', explored how brands can use music to successfully create emotional bonds with people. Best known for his work with Jay-Z, Young Guru is now chief music strategist at Omnicom's The Marketing Arm, and was joined on the panel by FleishmanHillard London creative director Kev O'Sullivan and Seoul senior account manager Sam Kim.

Young Guru noted that brands need to seek out artists that have similar values and goals to their own. The hip-hop producer advised that to get the musician-brand relationship right, companies should only "approach artists who share the ethos of what they're trying to sell." He added that both sides need to be upfront about what they want from each other.

"They're looking for that emotional connection," said Young Guru. "With a musician or song you're touching on emotion and getting to a point where they're connecting whatever that feeling was with whatever the product was."

Despite that advice, though, Young Guru pointed to Pepsi's misjudged ad with Kendall Jenner and Mary J. Blige's Burger King commercial as examples of how brands still get collaborations wrong.

"People get it wrong because they don't understand certain subtleties," he said. "There are certain stereotypes with what's cool in certain cultures, but they can change very quickly."

O'Sullivan recalled how he has watched brands who want exposure just "slap on a famous name and use the lazy logic of 'the artist's famous and liked, put them in the ad and our brand will be famous and liked.'"

"Because of that, I've been on the receiving end or the production end of some pretty disastrous collaborations. It's necessary to use a more authentic approach and think of it as a marriage where both the artist and brand need to be compatible," O'Sullivan said.

Kim agreed that "authenticity is very important," pointing to FleishmanHillard Korea's Fingerband public health campaign, which helped to reduce teen smoking in Korea by creating a K-Pop music video with a popular local band. To catch the eyes of teens, the campaign involved extensive musical collaboration, rather than traditional health outreach which the Korean government usually prefers. The goal was to decrease teen smoking to 12% by 2020, a target which was achieved five years ahead of schedule.

"We couldn't work with artists who smoked," said Kim of the campaign's search for authenticity.

O'Sullivan, meanwhile, showcased two other campaigns created by FleishmanHillard. One, for Hormel's Black Label Bacon, saw comedian and musician Reggie Watts develop his own song and lyrics about bacon, including the sound of 'sizzle'.

"The challenge for creative minds in our sector is that you can go with a particular personality who you know is going to work sheer magic, but then they're out of the country that day or maybe vegan," said O'Sullivan.

Meanwhile, 'Made By Me' for Women in Engineering by the University of New South Wales, enlisted a popular rock band and music video to highlight examples of engineering in action. The campaign aimed to inspire more women to enrol in the engineering program, and resulted in female enrolments for engineering in 2017 up by 24%, and still climbing.

O'Sullivan pointed out that a key factor in a successful music driven campaign is relinquishing some creative control to the artists. "It's nearly impossible to get it completely right. You want musicians because people are so passionate about music. If you really want it to be a success and drive you're commercial needs, you're going to have to let go of some control and give some to the person with the artistic credibility," he said.

While brands are looking for increased sales via the marriage of music and products, artists gain more than a paycheck. Young Guru said that in an era of selling less and less records, it's a direct way for them to connect with fans, and most importantly, gain influence.

"It's not just about the money, it's about making it on your own and building your audience," he said, advising artists to be smart about working with brands that match their values, rather than "selling out."

While Young Guru pointed to Red Bull as an example of a brand that has successfully married content and music with its marketing, he added that this kind of thinking was still too rare.

"I think people aren't thinking through everything they're doing and we're getting some cookie cutter stuff. There's still work to be done."