Please refer to our Privacy Policy for important information on the use of cookies. By continuing to use this website, you agree to this.
Home Latest Clean Creatives Blasts PR Firms In Manhattan Poster Campaign 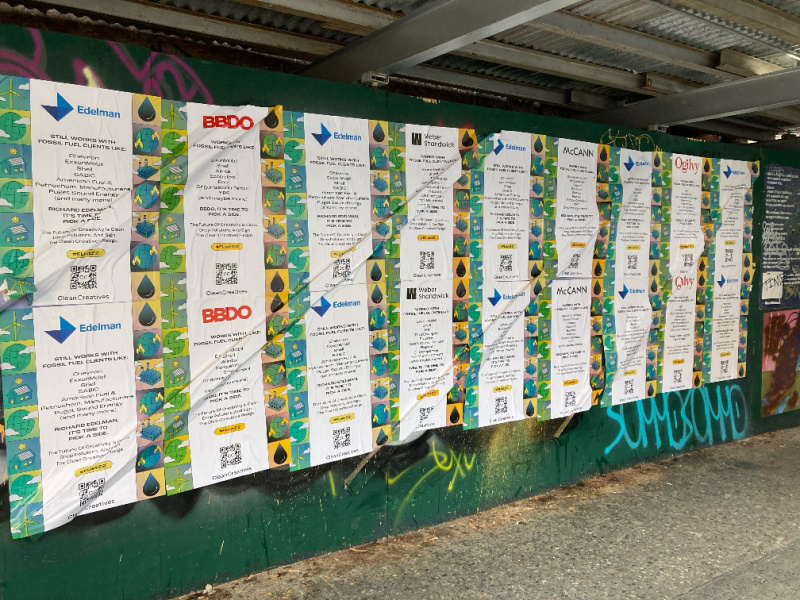 NEW YORK — With activists in town for Climate Week, Clean Creatives this week plastered parts of lower Manhattan with posters calling on agencies — most notably Edelman — to drop their fossil fuel clients.

About half the posters called out Edelman for working with Big Oil clients like ExxonMobil and said to CEO Richard Edelman, “It’s time to pick a side.” The other 100-plus posters targeted other large agencies — Weber Shandwick, Ogilvy, McCann and BBDO among them.

“We want people in the ad and PR and marketing industries to collectively say, hey, we shouldn’t be working on fossil fuels because fossil fuels are actively destroying our planet,” said Joe Cole, who designed the campaign.

The poster campaign coincided with release of Clean Creatives’ F-List 2022, which documents more than 200 agencies worldwide that work with fossil fuel clients. Clean Creatives timed the initiatives to capture attention during the annual Climate Week NYC and while the UN General Assembly was convened.

“We wanted to make sure that communicators who were in town to talk about climate action had full transparency about the agencies that are assisting polluters,” said Clean Creatives executive director Duncan Meisel.

The initiatives also come amidst growing calls for PR firms to cut ties with Big Oil.

On Tuesday, UN Secretary-General António Guterres blasted PR agencies for “raking in billions” by downplaying fossil fuel clients’ detrimental effect on the climate — and said they should pay for doing so.

Less than a week before, federal legislators ramped up their probe into PR firms’ relationships with Big Oil companies with a congressional hearing that investigated the industry’s role in spreading deceptive information

In January, more than 450 scientists called on PR and advertising firms to stop working with fossil fuel companies.

The effort was coordinated in partnership with the Union of Concerned Scientists and Clean Creatives, which in November, launched a high-profile celebrity and influencer campaign calling on Edelman to drop fossil fuel clients.

Two weeks earlier, Edelman unveiled a series of actions it pledged to take in response to those calls, which include walking away from companies that do not meet a series of criteria on climate action. At that time, Edelman identified 20 emissions-intensive clients for follow-up discussions after a 60-day review of its portfolio.