Please refer to our Privacy Policy for important information on the use of cookies. By continuing to use this website, you agree to this.
Home Latest Communicating In A Pandemic: Andrew Cuomo's Keys To Success 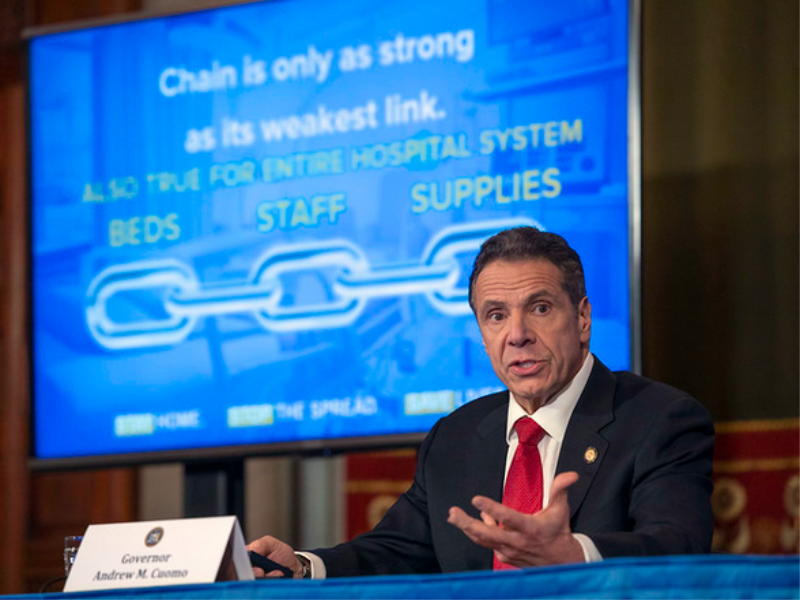 Communicating In A Pandemic: Andrew Cuomo's Keys To Success

In New York, the epicenter of the Covid-19 pandemic in the US, Governor Andrew Cuomo has emerged as a charismatic leader steering the state in its battle against the deadly coronavirus outbreak. A longtime Democratic public servant who worked in the Clinton administration and has served as governor since 2011, Cuomo over the past month has demonstrated his command of using communications to win the public’s attention and respect. Below, we explore 10 keys to his success in doing so:

Gov. Cuomo is rigorous in his use of data, using it to inform his decisions in managing the coronavirus crisis. But he communicates that information with the public by speaking like they do. His communications are personal, sharing concerns about the well-being of his mother and that his sister had called him in a panic, wanting a Covid-19 test at a time when there were almost none in New York. He always looks for practical examples and human stories to help him reach people. At news conferences, Cuomo uses PowerPoint presentations sharing clear, direct and very concise messages such as, “Younger people are not that contagious. This is absolutely untrue! And it endangers our most vulnerable people.” His institutional slogan, present on all slides, is “Stay home. Stop the spread. Save Lives.”

Andrew Cuomo doesn’t lie. He is up-front about the exponential growth of the coronavirus outbreak, the fact that New York is the epicenter of the crisis in the United States and the reality that the hospital system could collapse. He shares bad news, such as the growing number of Covid-19 cases and deaths. And he gets angry with New Yorkers who disregard social distancing in public places, like city parks, and threatens to take more drastic action to control adherence to restrictions if he has to. But his reproaches are more akin to those of a parent trying to protect you than the kind you see coming from Donald Trump, who harshly dismisses journalists he doesn’t like, for instance. Cuomo speaks not just to the head, but also the heart. He communicates with soul.

“Am I afraid? Yes. Do we know how long it will last? No. Of course I don’t have an answer to this. But together, we’ll keep moving forward. We New Yorkers are strong. We’re fighters, and we’ll keep moving forward.” Since the start of the coronavirus outbreak, Cuomo has used rhetorical questions such as the one above as a means of delivering messages, while building a sense of community. He calls on people to show solidarity, a core virtue of New Yorkers. He also was the first politician talking about what people should be doing at home during the quarantine, suggesting they read, meditate and do physical exercise. He urged people to “Talk to your loved ones, and tell them how much you love them. We will get through this, as we have other difficult situations.” He does not talk about religion or any god, but makes community values and principles a focal point.

Cuomo’s long career in politics and vast amount of public exposure have prepared him to deliver strong messages that journalists echo quickly. He recently stressed the severity of the situation by putting it bluntly: “The difference between having enough ventilators and not having enough ventilators is the same as the difference between life and death.”

Cuomo’s communications team is agile and effective, with social posts used for making announcements or sharing pertinent information on everything from available aid to restrictions. In turn, his social channels have become sources for reliable, up-to-date information.

Cuomo is most active on Twitter, where he has more than 1 million followers and has a high level of engagement with them.  It is his main weapon of choice for communicating, and he has a high level of per-tweet engagement. Cuomo’s content on the platform is very well organized, with clear, well-structured messages targeting society at large. He uses Twitter to call for more doctors and nurses, or even medical interns, to join the fight, or asks the private sector for help getting more ventilators. Cuomo takes a multidisciplinary approach, acting as both activist and the voice for official decisions. Surprisingly, his Instagram is much less active, given that the network is targeting the younger audience he needs to reach because of their role in the spread of the disease.

Gov. Cuomo has not hesitated to call on actors and other famous New Yorkers to help encourage people to abide by restrictions and stay home. As a result, notable personalities such as Robert De Niro, Danny DeVito, Ben Stiller, Alec Baldwin, Krystal Joy Brown and others have had a tremendous impact. Those partnerships have been a boost for Cuomo’s image, as his ability to mobilize high-profile individuals speaks to his leadership and influence.

Cuomo knew that he had to move beyond press conferences and newsrooms to communicate with impact. So that is what he has done, creating a plethora of coverage in the field. For instance, Cuomo had his picture taken with a respirator and in the Javits Center, Manhattan’s largest temporary hospital, with medical supplies placed strategically in the background. Those images have value in that they give credibility to Cuomo’s message — and action. Cuomo also made a video that looks more like part of a reelection campaign than a crisis management effort, but it shows his deep knowledge of the art of communication. It is a motivational video that shares objective data to spur New York patriotism at the highest level, in pure American style.

Andrew Cuomo speaks like a leader and offers solutions. He acknowledges limitations, but states what needs to be done in statements such as, “We need more than 30,000 respirators in 14 days or we’ll have many deaths that we can avoid.” He stands up and takes all questions without hesitation.

Cuomo’s public exposure, at all levels, is constant. He doesn’t hesitate to tell President Trump that the lives of New Yorkers come before the economy. In doing so, Gov. Cuomo shows he understands the power of good communications in a crisis, and how difficult times can create space for those taking leadership roles.

Numerous studies have shown that body language and nonverbal communication are responsible for delivering more than 70% of the message, which Gov. Cuomo does by exuding calm, strength and security. He has a steady gaze and powerful voice; his relaxed manner, and touches of humor, resonate with the public, and show empathy for the journalists covering his every press conference. A master of intonation, Cuomo doesn’t hide his feelings, whether its outrage at the lack of resources or coordination from the Trump administration, his frustration with residents who don’t stay home or his compassion for New Yorkers. He is a good example to follow for both professional communicators and politicians who think they can still learn and improve (if there are any!). The good (and sad) thing is, Cuomo will likely continue giving us lessons for a while. From the communication perspective, however, his actions are worth analyzing.

Alejandro Romero is an LLYC partner and CEO for the Americas. Gerard Guiu is the agency’s director of international business development.